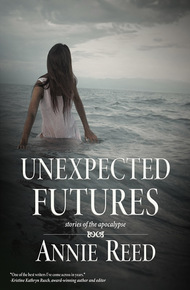 How will the world end?

In a flash of nuclear fire? Or the endless night of a sun gone inexplicably dark? Or perhaps the loss of all the electronic data that makes the modern world go round?

Maybe just with the quiet disappearance of most of the world's people, leaving behind only a few to start over again.

If you're a fan of post-apocalyptic fiction, you won't want to miss this collection by award-winning writer Annie Reed. Just make sure you read these stories with the lights on, and have a few tissues nearby.

"The Color of Guilt," originally published in Fiction River: Hidden in Crime, was selected as one of The Best Crime and Mystery Stories 2016. "The Flower of the Tabernacle" received Honorable Mention in the same year's best volume.

The world's going to hell all around us, and what am I doing?

Sitting in a bomb shelter—an honest-to-God, straight out of the '50s bomb shelter, people!—with my best friend Bernie Silverman.

Bernie's great grandfather built the thing in the backyard of the Silverman Family Home, as Bernie's dad used to call it, during the height of The Cold War, an era only briefly mentioned in the history and government classes I suffered through in high school. The teachers always ran out of time somewhere around World War II and speed taught the rest of the Twentieth Century as the school year ground to a merciful close.

Which worked out rather nicely, since the last thing any of the students wanted to think about as the freedom of summer inched tantalizingly closer was how a whole generation of Americans thought they could survive a nuclear war by hiding out in a concrete bunker buried in their backyard.

What I do remember thinking about most often during my high school years were girls.

I spent long evenings alone in my room, stretched out on my bed listening to whatever crap popped up on my Internet radio channel, eating sunflower seeds and obsessing about how I could get some girl—any girl, although hopefully one who liked other girls (kind of a crucial point)—to let me kiss her.

Luckily for me, I've kissed a girl since then. Several, as a matter of fact.

Bernie never had a thing for girls. Or guys. Or sheep (as far as I know).

Bernie had a thing for knowledge.

He read every chapter of every book for every class he had, whether or not the chapters had been assigned for homework. Needless to say, his I.Q. was off the charts. Even in the few A.P. classes available (and he took them all), he aced every test, totally throwing off the curve. He sucked at sports and was epically inept at any type of social interaction. Even the nerds thought he was weird.

Bernie was a brain. I was the only lesbian in school. We were the outcasts of the outcasts, so of course we became friends.

That's the only reason I'm sitting in a bomb shelter while out in the rest of the world, civilization is tearing itself apart.

In the solitude of the Silverman Family Home, which Bernie's parents gave him after they chucked the rat race and moved to a nice little condo in Boca Raton, Bernie must have put all the pieces of everything he knew together and calculated imminent disaster, because the dude was prepared.

Not for nuclear war, thank God, but for a series of events I'm still somewhat unclear about.

I think the first thing to collapse was the Internet—nobody knew why, or at least they weren't saying—followed closely by the complete evaporation of all electronic bits and bytes stored in any sort of computer system.

Think about that one for a minute.

Bye-bye cloud. Bye-bye bank records and ownership records and New York Stock Exchange. Even if you had backups on flash drives and CDs, the computer programs necessary to read that stuff—you know, the ones you bought on subscription?—were so much useless garbage.

All of a sudden about a bazillion scared, angry people went scrambling for paper records and started wishing they had a little cash in the house instead of always relying on their debit cards.

A disaster of epic proportions.

Next came the most crippling blow of all: the communications systems went down.

No cell phones. No fiber optic landlines. No satellite dish television networks. The computers that controlled all that stuff were toast.

It didn't take long for riots to start.