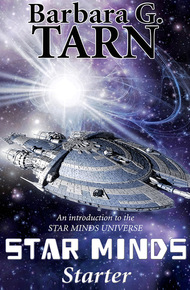 Barbara G.Tarn writes mostly fantasy, a professional writer and hobbyist artist, a world-creator and storyteller. She has a few ongoing series: her fantasy world of Silvery Earth (high fantasy) and the Star Minds Universe (space opera) are mostly standalone. She dabbles into historical fantasy with her Vampires Through the Centuries series and plays with post-apocalyptic/steampunk in Future Earth Chronicles. Find her books at www.unicornproductionsbook.com.

Two of her stories received an Honorable Mention at the Writers of the Future contest. She has stories published in Pulphouse Magazine, The Phantom Games, Halloween Harvest and Crunchy with Chocolate. She writes, draws, ignores her day job and blogs at: http://creativebarbwire.wordpress.com.

This introduction to the Star Minds Universe includes the novella "Shooting Star" and the novel "Technological Angel (Star Minds Book 1)". Both stories introduce the reader to Kol-ian, alien Humanoid, a telepath and a very young rebel.

Heartbroken, he takes refuge on 20th century, low-tech Earth. He will leave years later with an earthling in tow to go back to the Galactic Empire and the hustle and bustle of the Milky Way civilizations. The beginning of a space opera saga.

I'm an outcast, Kol-ian thought. I'm not worthy of living. Then why am I still alive?

The pilot seat was comfortable, but the silence of the starship's deck was deafening – except for the engines that grated on Kol-ian's nerves, reminding him he had nobody to turn to except computers.

Not his wicked family who hadn't allowed him to have any friends. Not his people who were either mind-controlled or didn't care about his fate. Not even his home planet, left behind with everything else.

"Get out of here," Tyro had suggested. "If you stay on Marc'harid, either they kill you or they turn you into one of them."

A mind-controlled puppet like his brother-in-law. Or dead, like his mother who had dared to confront the Emperor. In spite of his broken heart, Kol-ian didn't want to be like either of them.

He knew he had no choice. Either he left or he'd end up married and mind-controlled. And he'd have to give up his implant, after all that he'd been through to have it. A way of being truly different from them, although it had forced him to run away from them. It was a lost cause – staying would only make him lose himself.

The map of a solar system appeared on the main screen. He was approaching his destination, and his mood hadn't improved yet. Maybe it never would. Maybe this new place would be worse than home. Maybe self-exile wouldn't heal his broken heart.

"Go to the closest Reptilian colony," Tyro had said. "They breed Humanoids and you'll be able to blend in. Nobody will look for you there."

"Breaking news," he recited in an anchorman's voice. "Let the galaxy know that Kol-ian Vaurabi crashed on a Reptilian colony and died as he deserved! Like a shooting star, he fell to his death! Good riddance, he was too dangerous!"

He scoffed. Ha! If I'm dangerous, what about my wicked family? Oh, wait. They're the saviors of the universe! I'm the rebel son who refused to play by their rules!

He snorted in frustration. On Marc'harid they must know by now he had left with all his belongings – well, the ones that could be carried away, that is. His laptop, a few clothes, his personal shuttle parked in the hangar of the Imperial starship he was driving.

He had to leave behind the place where he was born, his faithful bodyguard and the trees of the palace gardens, and his mother's grave. And his only secret friend, Tyro Megnaghy, a scientist who worked at the palace and who had provided him with the coordinates of his destination – a Saurian colony in a forlorn star system with only one terraformed planet.

Kol-ian checked the autopilot as the starship entered the star system, heading for the third planet from the sun. Soon the computer readings started showing him data on the fast approaching blue planet – a Humanoid world where he could easily disappear, just as Tyro had suggested. It wasn't part of the Galactic Empire and being low-tech, nobody would look for an aristocratic Sire there.

Of course there were Watchers and Saurians, but he knew how to avoid them once he reached the planet's orbit. He couldn't hide the Imperial starship, though, and was ready to get rid of it. Should have called it Shooting Star. Didn't spend enough time on it to give it a name, though. Maybe it had an official name, but he didn't care. He had picked the first semi-automatic starship available and ready to take off.

Other starships cruised around the third and fourth planets, mostly Watchers, but also Saurians who wouldn't allow unauthorized spacecrafts near their colony. Kol-ian could ask for protection, but he didn't like the Reptilian sub-race in charge of this world, so he decided to ignore all identification requests.

Upon reaching the planet, he instructed the autopilot to angle towards the night side of the planet and glide towards to the surface.

"You wish," Kol-ian muttered without touching the communication panel. "Not telling you who I am, lizards!"

He set the autopilot to land over a peninsula roughly shaped like a boot while the Saurian voice hissed threats on the starship radio. Learn correct Intergalactic, you snake! Reptilian mouths seemed to have problems with any language except their own.

"Go to hell." Kol-ian got out of his pilot seat, mildly irritated by the interference.

He grabbed his backpack and headed for the hangar. Time to use the shuttle – pity it wasn't interstellar, but it would do for the planet that had invaded the main screen of the Imperial starship.

The Blackshirt shivered before entering the room. It had been a long day – a mysterious flash of light had lit up the night on the road between Magenta and Novara. And then in the morning many people had seen an unknown aircraft fly low around Milan. Local newspapers even gave news of a landing, which had sent the Fascists into a cover-up frenzy.

Now it was officially a crash and the Blackshirts had recovered a strange vehicle that looked like a flying saucer which they'd hidden in a nearby hangar. He, being the team leader, was supposed to report to the shadowy boss what they had accomplished on that fine day of June 13, 1933. Strange that Filippo Eredia had sent him to this Sirio Sassano, instead of Italo Balbo or any other member of the Gabinetto RS/33.

"Sso?" Sassano had a hissing voice and his shape was hidden in darkness, but the Blackshirt didn't mind. He had tried to look at him once and had felt sick at the stomach, so he avoided eye contact at all costs now.

"Nothing, sir, the flying vehicle is empty," he answered, saluting and staring into space so he wouldn't have to focus on the intimidating shadow. He didn't know why Sirio Sassano was almost as respected as the Duce himself and had no intention of questioning it.

"It's imposssible!" The hissing sent shivers down his spine. "There was a pilot or a passsenger!"

"We found nobody, sir. The vehicle is hidden in the buildings of Siai Marchetti of Vergiate, as per your instructions. Should we start dismantling it?"

The Blackshirt saluted and stepped back. He'd let Balbo and Eredia take Sassano to the vehicle. His job was done for the day and he looked forward to going home and rest.