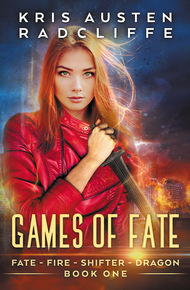 Kris's Science Fiction universe, World on Fire, brings her descriptive touch to the fantastic. Her Urban Fantasy series, Northern Creatures, sets her magic free. She's traversed many storytelling worlds, including dabbles in film and comic books, time as a talent agent and a textbook photo coordinator, as well as a foray into nonfiction. But she craved narrative and richly-textured worlds—and unexpected, true love.

Kris lives in Minnesota with her husband, two daughters, and her three cats.

Acid-spitting ghouls. Deadly visions. And a man and a dragon willing to sacrifice everything to keep a reluctant Fate alive….

When monsters attack Rysa Torres, her latent Fate abilities activate — and drop her headfirst into a world of future-seers, shifters, and dragons.

Rysa's escalating visions reveal a shattered future engulfed in flame. Other powerful Fates see the same ignited future — Fates who think the only way to stop the coming apocalypse is to kill the man and the dragon who might be the planet's only salvation. The same Ladon and his companion Dragon who, when they find the newly-activated, terrified Rysa, quickly realize she's not only the key to saving the world, but their own broken, lonely souls….

Readers say the depth and world building of the Dragonriders of Pern meets the heroic heart of Mercy Thompson in the explosive, genre-bending World on Fire universe. Dive into a world where Science Fiction blends with Urban Fantasy and immerse yourself with dragons, immortal warriors, family, love… and unknown science so advanced it's indistinguishable from magic.

I'm sorry it starts this way. I'm sorry I couldn't be there to keep you from drowning.

That's not how the science works. I can't reach back in time and lift you out of the riptide of power that is about to pull you under. I can't help you tread water inside the whirlpool that is your attention issues.

You need to do this yourself. I did. We had—have—no choice, you-who-will-be-me. For you, fate is about to trigger a new pass through these cycles. Fate is about to hand you yet another chance to make things right.

Keep your head above water. Breathe. And always remember what a wise man once said: "Sufficiently advanced technology is indistinguishable from magic." There are no gods at play here. Only you.

And in you, I have faith.

Rysa's attention deficit meds weren't in her backpack. She fished through the lint under her laptop and caught only a pen and the corner of her wallet. Wads of paper and a few stray coins filled the bag's recesses, but her pills were nowhere to be found.

The shadows in the back corner of the Continuing Education Building's coffee shop didn't help her search. Most of the café glowed with bright, friendly lighting, but attractive atmospheres attracted customers, and other people were distracting even on the days Rysa remembered her meds.

The rich coffee aroma and reverberating buzz of the shop's espresso machine didn't help, either. The noise added an extra layer of attention-stripping stimuli to the front tables, as did the flickering television screen on the wall, so this evening's bout of homework—and digging in her bag for her stim meds—happened as far from the front counter as possible.

Not that she trusted herself to be thorough. No meds equaled a super-sized portion of "flighty" and a bottomless cup of "hyperactive." The headache ratcheting up from her eyebrows over her scalp to the base of her auburn ponytail wasn't helping, either.

Rysa dug her hand into her stupid pack again even though she knew she was wasting her time.

Her friend Gavin sat on the other side of the table. He tapped his pen against his sprawl of chemistry notes with a rhythmic slap slap, pause, slap slap that did nothing to ease Rysa's distraction.

He'd long been more accommodating with her attention issues than most of her other friends, probably because he wanted to become a doctor. She was, after all, good "patience with a patient" practice.

He wasn't being patient tonight. He'd frowned about twenty minutes into the first problem when it became clear that helping her would take all night.

Rysa slapped a notebook harder against the table than she meant to. The table wobbled, and a loud clunk popped from its uneven feet.

Gavin's hand jerked up and he leaned back.

Do you want help with your chemistry or not? he signed, his hands moving through the American Sign Language with quick precision. He wore hearing aids, but he and Rysa signed, too.

"Yes." Rysa looked directly at him so he could read her lips clearly, knowing full well she'd also narrowed her eyes, even though she didn't mean to. Her head throbbed and the pain was adding an edge to her already annoying issues.

She rubbed her forehead. "Sorry."

She did need his help. This close to finals, if she didn't figure out her assignments, she'd fail another class. The University would kick her out. She knew it.

Gavin's shoulders slumped and he crossed his arms—his way of giving her the silent treatment.

How was she supposed to focus on homework without her attention meds? One more dig into the bag produced only a crumpled five dollar bill. She dropped it next to her notebooks.

Gavin scowled this time, and his gaze followed her hand as it dipped into the bag again.

He didn't always understand his classwork. She'd helped him with Human and Environmental Policies last semester. He'd been a chore, no matter how hard she tried.

Did I mess up your evening? she signed before scraping her stuff into her bag and plopping it onto the floor next to her feet.

Gavin sighed. He usually had the laidback calm of someone who'd just finished a good workout. Women found his ease with the world—and his big blue eyes—charming. The boy had more contacts in his phone than the University had numbers in its database.

Gavin's finger twitched as he pointed at her bag. Isn't it a little late to be popping stim meds?

The headache flared behind Rysa's eyes.

It came out of nowhere as a semi-nauseating ping against the inside of her skull. She bumped the table. Her calculator slipped off a book and jarred her chai and a splash plopped onto her Chemistry Principles syllabus.

Steam rose off the course description as if she'd dropped acid on it, not hot tea.

What just happened? She blotted a yellow stain as it spread across the syllabus. The liquid ate away the words and they bled onto the tabletop, destroyed by her impulsiveness.

"Rysa?" Gavin signed something, too. She didn't catch it.

He sniffed and the titanium in his ears flickered with the light from the television behind her head. She'd sat with her back to the little café's screen for a reason. News crawls and no meds did not mix well.

This morning, when she'd come down to the kitchen, her mom had been watching the news. A suburban Chicago mall had exploded last night. There'd been big fires in several towns along Interstate 94 between Chicago and Minneapolis, too. And a couple of the talking heads on the screens in the student union had been ranting about terrorists or gas leaks or 911 calls that may or may not have indicated a suicide bomb—

"I'm sure you left your meds at home." Gavin leaned back as he spoke. Why don't you breathe so you can drive home? he signed.

Breathe? Her syllabus disintegrated on the table, ruined by a splash of hot and random, much like her academic career.

She stared at the stain still spreading across her syllabus even though she didn't want to. Her mind hyper-focused on this one perfect representation of her time at the U and wasn't going to let it go.

"You should talk to Disability Services." Gavin's chair groaned as he shifted again.

A new rainbow of reflections danced across his hearing aids. She stared like a deer caught in headlights.

Gavin's gaze jerked up to the screen behind her. The images must have changed.

Rysa closed her eyes. She wouldn't turn around and be caught by the news. She'd spent her last class staring out the window toward the east, her anxiety creeping up for no obvious reason.

Whatever stalked through Illinois and Wisconsin felt as if it was about to burst from the horizon and scorch all of campus—and her in particular. The effort it took not to freak out was probably what had triggered the headache, and was as big a contributor to her inattention as anything else.

Today was not a good day to have forgotten her meds.

Gavin said something again. Her face scrunched up as she tried to parse it.