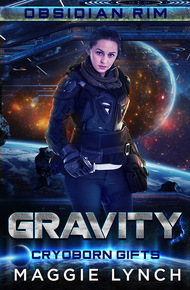 Maggie Lynch is the author of 26 published titles, as well as numerous short stories and non-fiction articles. Her fiction tells stories of people making heroic choices one messy moment at a time.

After careers in counseling, the software industry, academia, and worldwide educational consulting, Maggie chose to make her joy of writing a full-time job. Her fiction spans fantasy, science fiction, romance, and suspense. Her non-fiction focuses on guiding authors to business success in their career through planning, distributing, and marketing their completed work.

Help no one. Show no mercy. Stay alive.

Lehana Saar learned the smuggler's trade the hard way–as an indentured servant to the Rim's most notorious pirate. With the skills she acquired and now with her own ship, the star freighter Phoenix, Lehana is known throughout the Rim as a trafficker who will take any job, however dangerous, for the promise of a good profit. But when she's forced to crash land near a mining colony owned by the heinous, galactic cartel QueCorp, she'll need all her cunning and experience just to survive. And maybe, with a little luck, she might even turn a profit by forging a deal with the mine's owners. That is if she can turn a blind eye to the dismal conditions and merciless exploitation of the thousands of QueCorp's slave laborers.

Forty-five years ago Kash Trider and his wife crashed on Ydro-Down. Captured by QueCorp, they were forced into the mines with no chance of release. Qubition ore killed Kash's wife and now only two things keep him going: his hatred of QueCorp and the hope of freeing his two children from the same fate. When the Phoenix crashes near the mine, Kash risks everything to get his children on that ship. But will the hard-edged captain help him escape or will she turn him in for the five million DIC price on the head of a fugitive QueCorp slave?

"No! No, no, no," Lehana screamed as she was thrown back in the pilot seat when the qubition ejected for a third time. "What the freeze? I did not authorize that. I did not!"

A single injection of just the right amount of qubition stabilized the wormhole. But the Phoenix had just released her entire Q supply, enough for at least seven transits. She had no idea what that would do. At best the hole would start closing behind her and she'd exit before it closed. At worst it would collapse and she'd die. Or she'd be thrown somewhere else in the multiverse and she'd never make it back to the Salty Way.

None of those scenarios were great for a pirate who'd just changed identities, ship registration, and purloined enough credits from a systems hacker to set her up for a year without having to trade anything for income.

Painful starbursts of light exploded on the forward viewscreen. Lehana screamed again as the ship accelerated through the wormhole, seeming to fall without control toward the other side.

"Kali!" she screamed at the ships AI. "You just pissed in the vac and I'm the one who's going to pay for it. Where are we? Where can we land?"

Lehana held back a string of additional curses as the ship shifted abruptly several more times, throwing her against the cushions of the pilot's chair until her entire body felt like she'd played with by a 500kg jellicant that rolled over her several times. It wouldn't do any good to curse at the AI. It had no feelings and had no comprehension of guilt.

"Anytime," she said to Kali through gritted teeth. "It would be nice to know where we're crashing before I pass out."

"What do you mean expended? We need to slow to subsonic speed! Dump the cargo bay."

Lehana was thrown back in her seat, and the increasing pressure on her chest pinned her there as the Gs climbed.

"Prepare for atmospheric re-entry in five…four….three…"

"Drakh! Drakh! Drakh!" Lehana hit the enclosure button on her chair. The padded headrest and seat back extended into a circle enclosing her in a shell that would cushion her body in the crash.

She felt the ship bounce three, no, four times along the surface of something and then impact. Everything went dark.

Lehana woke to a headache worse than the last time she'd had a hangover from a bad batch of vac-alky. Though she could see nothing in her egg cocoon, she heard all kinds of alerts and warnings heightening the pain.

"Shut off all audible alerts," Lehana instructed, her voice a scratchy whisper as if she'd been screaming for days.

The welcoming silence helped her take a deep breath and center her thoughts. "What about second and third level repairs?" She didn't need so many noises echoing in her head. "And open my egg so I can see what the hell is going on."

"Like hell! I'm not staying in here for four days. Make it a first level, high priority, right-this-minute task!"

The padded egg creaked open about one third of the way.

"That is all I can manage until other first level systems are operational," Kali said.

Lehana manually released the harness holding her, and then snaked an arm out the opening. She braced her hand against the outside shell casing and groaned as she leveraged herself up to stand with one leg out and one leg inside. She balanced for a moment checking her steadiness. Though she was petite, her frame barely fit through the opening. Satisfied with her balance, she slowly extracted the other leg and arm, this time biting off a whimper.

The viewport to the front of the ship showed nothing but sand and rock. "How bad is the hull?"

"The structure is stable," Kali responded.

Was that a note of pride Lehana heard? No it couldn't be. AIs didn't show pride.

"And the cargo bay?"

"Structurally stable though repairs are needed on individual units. It is not pretty," Kali added. "Exterior repairs, outside of hole patching, are not in my purview."

Lehana sighed. Not that she cared if the ship was beautiful, but she'd just paid a good two-hundred million credits for a brand new hull. When she'd left dock on the other side of the galaxy, it had been reinforced with the latest technology and the skin honed to a nice matte finish that absorbed light instead of letting it bounce off the hull. That helped mask her travels across the Salty Way. Perhaps that investment in the hull, along with heat shield upgrades she didn't think she'd ever need, were what saved the ship.

She carefully turned from side to side and stretched. Nothing seemed broken, even though she ached from the beating of the landing. The egg had done its job.

"What the freeze happened with the Q injection? Why did you dump the entire load?" They'd had some scary wormhole traverses before but this one could have left her spaghettified and never to be found again.

"Like hell it was. Dumping eight loads is not exact."

"But clearly that isn't true," Lehana bit out the words as she held back the desire to pound something.

"It is false data," Kali agreed. "I will perform a full diagnostic on my injection code. Shall I give that priority over first level tasks?"

"Drakh," Lehana swore. What was an AI good for if it couldn't accurately prioritize? "We aren't injecting Q soon. We don't have any Q onboard anymore because you dumped your wad in the hole. So what do you think? Of course it is not a first-level task. But you damn well better have it figured out before we get off this planet and make another jump."

"The rise in your voice indicates a level of frustration that is misplaced," Kali commented. "I am not capable of making mistakes. If there is an error, it is a human error in my programming and I will identify and correct it. If it makes you able to better make decisions, I will await your sting of curses before your next instruction."

Lehana paced back and forth, cursing in her mind. She was not going to let the AI tell her how to respond.

"Where, exactly, are we?" she finally asked. May it please the stars they were in friendly territory.

Lehana knew QueCorp, the mining company that ran Ydro-Down. Was it two or three transits ago that she'd picked up a full load of Q to deliver to a space station on the other side? "I know the station here. Have you already sent the request for assistance?"

Lehana shook her head, unable to comprehend what she just heard. "I know we are not in the station. We are obviously buried in rock on the planet. But we are near the catapult station. Right?"

"Negative. We are closest to Mine 154893, approximately two-hundred and seventy-four kilometers from catapult to space dock."

Lehana did a quick calculation in her head. She had approximately 5.2 million DICs left in her accounts after expenditures to get the Phoenix in shape. No way could she afford a gravity lift to the station and still be able to purchase Q to get her through the next wormhole. If she was lucky, she might negotiate a single load of Q for five million DICs. That's assuming she could get a fifty percent reduction from the current market rate, leaving her almost nothing for repairs beyond what Kali could make using what materials already on the ship.

"Will level one repairs get us airborne?" she asked. "Enough to get us to the station?"

"Negative. Level one repairs are to backups for life support, the medical bay, and sanitary systems. Level two will include significant repairs to achieve cruising control and enough escape velocity to leave the planet and get to space dock with the help of the catapult."

"Concentrate on getting us off planet. I'll work on negotiating a Q load and advanced credit for repairs."

"That is not possi—"

"That is not a suggestion. I can't afford to stay here any longer than three days. This is not a friendly place. It will take all my persuasive powers, and likely a good amount of bribery, just to make sure my ship isn't impounded by QueCorp. I had no permission to land and they will certainly take offense at the fact I crashed into a current or future mining line."

"I will attempt to complete needed repairs in three days," Kali affirmed.

"Not attempt. You will do it."

Kali did not respond.