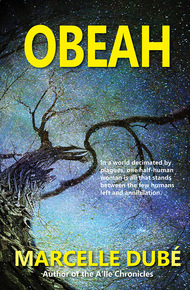 On a near-future Earth decimated by plagues, two species of humanity survive—Homo sapiens and Homo gaians. When an insane gaians blames sapiens for the world's problems, only Lauren Tom will stand between him and the destruction of the remaining sapiens.

Unless she decides he's right.

Lauren Tom doesn't need anyone, thank you very much. She survived the Troubles that killed her father, survived her mother's disappearance ten years ago, and now she survives just fine in a cabin in the Yukon wilderness.

At 23, she's the best trapper and fisher in the area. While her neighbors appreciate her generosity, they don't warm to her. They never have. She doesn't belong. She's too different, too odd, too restless. She makes people uneasy.

Then Cade, a strange, charismatic man who she once thought she loved, returns to Whitehorse. He wants her to come with him to the fabled Ben-My-Chree, a place deep in the wilderness that calls to her like a siren's song.

His return sets in motion a chain of disastrous events that will change Lauren's life forever—and may result in the destruction of the world's remaining humans.

Silas walked stiffly down the middle of the dark, cobblestone street toward the New Montreal Library. He kept his head down to let the rain run off his hat brim, away from his eyes. The downpour released the pent-up odors of the day—fried fish, wet garbage, outhouses—and his sensitive gaians nose wrinkled in protest.

He took a circuitous route to avoid the worst of the puddles. The only light on Rue St-Clément shone above the library door, half a block away, where a solar cell lamp reflected wetly on the cobblestones. Inside, he knew from experience, beeswax candles would be the only source of light in the reading room. It always reminded him of his early days in this city, before electricity came. And went.

A few latecomers emerged from the darkness on the far side of the library and hurried for the door, their feet splashing. With their sapiens eyes, they didn't see him in the dark and they disappeared into the library, leaving the street deserted once more.

The poet reading tonight was a Montreal favorite. Silas sighed. If he didn't hurry, he'd have to stand. His knees already ached enough. Of all the things to have in common with sapiens, arthritis seemed like a particularly cruel irony.

He was getting foolish in his old age. Coming out on a wet night would mean pain for the next few days, all because he admired the way some sapiens could string words together.

A familiar tingle in his belly warned him as he approached the lit library door and he stopped in the middle of the street, his mind blank with surprise. There was another obeah nearby.

As if conjured, a shadow pulled away from the recessed doorway of the Boulangerie St-Clément. Silas saw the man clearly, his gaians eyes compensating for the distracting light.

The man was big, judging by the way he narrowed the doorway, but it wasn't his size alone that left Silas staring. The entire gaians species was of one genotype: small, dark, and wiry. This stranger's hair was white blond in the reflection from the lamp next door. He was part sapiens.

The stranger stared back at Silas, his expression unreadable.

Silas forced himself to breathe. The man was here for the reading. There was no reason for alarm. It wasn't unusual to find two gaians living in the same city, especially a big one like Montreal.

But two obeahs? Obeahs were so rare that the likelihood of two of them being in the same area, let alone the same city—

Then a breath of warning from the ancestors reached him, cool on the back of his damp neck.

The obeah had been waiting for him.

Silas finally found his voice. "My name is Silas."

"I know who you are," said the stranger. He stepped onto the street and walked to within ten feet of Silas, where he stopped.

Silas grew still as he realized that he now knew who this man was, too. He had heard rumors about a young obeah seeking out other obeahs. Of the eight obeahs the man had found, two were dead and three were crippled, their link with the underworld severed. No one knew what had happened to the last three.

The younger man stood in the middle of the street, feet apart, hands in his pockets. Insolent. Or nervous? Rain plastered that pale hair to his skull.

A gust of wind swept rain over Silas' face. He took strength from the cleansing and from the strong thread of contact to the ancestors. He steeled himself for an attack.

Just then a woman turned the corner and ran head down toward the library, only seeing them at the last minute. She looked up, startled, and scurried inside, to Silas' relief. He didn't want any sapiens hurt.

"You're wrong to protect the saps," said the young man, reading Silas as clearly as if he had spoken. His voice was deep and edged with bitterness.

So much anger in this one. It made him dangerous. "Don't hate them," said Silas gently. "We can teach them—are teaching them. They are our cousins, after all."

But the young obeah shook his head.

"They're rats, feeding on our dying world. They should be exterminated before they can destroy us all."

Without warning, the young obeah closed his eyes, reached, and wrenched Silas's awareness out of his body and into the underworld. The street disappeared as darkness swooped over Silas. His unprepared body crumpled to the hard cobblestones and his untethered mind reeled. He couldn't find his bearings.

Then something hard clamped onto his ankles, pulling him downward so fast that a cold wind whistled past his ears and snatched his breath, slashing his unprotected face and hands like tiny knives.

Voices gibbered in his ears and invisible hands clutched at him. When the hands turned into claws and sharp teeth nipped at his calves, he flailed in horror, trying to drive the creatures away.

For the first time in over a century, Silas was afraid.