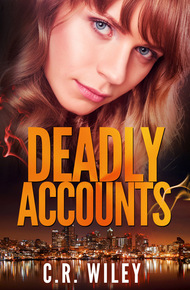 C.R. Wiley is the pen name of bestselling author Jason Letts, whose foray from into mystery from previous fantasy works is rooted in a deep interest in how technology is changing criminal behavior and our boundaries between what's private and personal. Deadly Accounts is the first book featuring the heroine Nora Wexler, who like many of Jason's strong-willed characters has a challenging time bringing her ideas about justice to bear in the world at large.

So if one were to conjecture about the nature of C.R. Wiley as a literary entity, it would be defined by an overwhelming urge to bring to light the dark elements in our society that so many would rather turn a blind eye to. In the news recently there have been near constant reports of online harassment, privacy breaches, data hacks, celebrity nude photo leaks, and more, but there doesn't seem to be anybody actually doing anything to stop that. Well, Nora Wexler is doing something about it.

Introducing Nora Wexler, the FBI's newest agent and the one best suited to track down a high-tech serial killer.

Spurred by the incessant threats of violence against women happening online, Nora Wexler joins the FBI on a mission to put them to an end, but she quickly discovers that being an agent comes with challenges that don't always fit into her plan. An attractive Iraq War vet and fellow agent named Travis Greer helps show her the ropes until he leaves for vacation, which happens to give him a front-row seat to the schemes of a twisted serial killer using anonymous Internet accounts to play smoke and mirrors with his victims.

Suddenly Nora is whisked to Seattle to join Greer and face off against a mysterious nemesis terrorizing a group of female business owners. It's sink or swim for Nora, whose reputation within the FBI will be on the line as she strains her faculties to save them.

After loving mysteries for so long I had to write one of my own, and the product was Deadly Accounts. One of my favorite aspects of the novel is how quickly hard truths you have to bet your life on can turn to dust. Maybe it’s cliché, but I loved how it all turned out. – Jason Letts

"I can't get over how oblivious these guys are to breaking the law. They think because it's the Internet there aren't any rules, that it's some mad free-for-all built entirely for their amusement, but we took a step toward changing that today. Do you think this will get much coverage in the papers?" Nora asked, looking over at him.

"It's hard to say," Travis said without taking his eyes off the road, but he knew the answer well enough. Without a grisly body or a big pile of money or drugs involved, the best this story could hope for was a blurb buried in the back pages. He couldn't tell her that, not when his instructions had been to let her run the show, even though it was her first case and the way she operated it was the antithesis of how he would.

"Someone's going to want to know about this," Wexler went on, her voice throaty enough to have an edge to it. "Even if it's just saving Kelly Ousterlich, that makes it all worth it for me. She'll be able to rest easy tonight."

"That she will. Be sure to keep that in mind when we get our next case. Anything could come our way, and it's not likely to be as fun as this one."

"Oh, no. I'm just getting on a roll. This is the beginning of a sea change when it comes to online harassment like this, and I'm going to make sure no one is able to get away with making these kinds of vicious attacks from their keyboards. Almost every woman who speaks out in the public sphere online is immediately introduced to a dark undercurrent of hatred and misogyny that seeks to undermine her credibility and shake her resolve through threats of sexual assault and physical violence. It's not right, and I won't stand for it."

Travis pursed his lips and tightened his grip on the wheel as he veered left with the road. He admired her focus, but she didn't understand how things were done. The hope had been that months of training at Quantico and the chance to pursue her own mission right out of the gate—outside of their jurisdiction no less, even spiking the football right in Milo Lotus's face in a way Travis never did—would have calmed her down, but that didn't appear to have worked out at all.

"Nora, federal agents aren't always able to pick their own cases or pursue personal goals. There's a lot of pressing stuff going on that Boffman could toss in our laps as soon as we get back, and it's our job to handle it with as much focus and talent as we bring to the table."

"Then why was I able to open my own case right as soon as I walked in the door?" she asked. As an agent, Travis knew an interrogative question when he saw one, and at the moment he felt just as much pressure as some of those he'd arrested must have.

"It happened to work out like that," he said, maintaining his composure. He could tell she was already on the verge of figuring out that the entire position at the field office in Albany was a way to placate her father, a senator from a nearby state. Sure, Nora had some impressive talents on the computer and with linguistic analysis—if given one hundred sentences written by ninety-nine people, she could tell which two were alike—but she was untested during the rough stuff and her ability with a firearm was improving but still questionable. She'd made it out of Quantico, but the real training was about to begin.

"Then maybe it'll happen to work out like that again," she said defiantly, stretching her arms and shifting in her seat. "If I want to have the biggest impact, that means I need to be right on the front lines of this battle, really get in up to my ears in all of the nastiness that's out there. That place exists online where every day thousands upon thousands are subjected to cruelness designed to wear down their victims. Social media, texting, e-mail, secret web forums—these electronic methods of communication are right where it all happens, and no one's paying any attention!"

Travis grunted his approval about wanting to be right in the middle of the action, but for him that meant a much different brand of judicial purview. If he had to make a list of his tools of choice, it'd be DNA analysis, facial recognition software, Luminol, audio/video surveillance, fingerprints, and last but not least the Glock he kept at his side. That was what he needed to identify, hunt down, and bring in criminals. Anything else was a distraction.

"If you ask me, spending that much time on the Internet should be a crime of its own," Travis said, shaking his head.

"It's the way of the world now," Nora replied, rolling her eyes but smirking as well.

"I'm serious," Travis continued, though he was far from it. "You said yourself there's all kinds of horrid behavior online. Maybe we should shut the whole thing down. How bad does it have to get before we decide the idea was bunk and do away with it? Then we could all go back to real living outdoors where things actually matter."

Nora tilted her head toward him.

"We could, but then you'd have plenty of new neighbors at your next secret campsite in the Adirondacks."

Even the thought of it sent a chill down his spine.

"Well, until we do away with it all, I don't have any choice but to keep pursuing these cases. And if anybody doesn't like it, they can get their heads screwed on straight and take another look at the law," she said, crossing her arms over her stomach.

Travis swallowed as they crossed the Hudson and watched Albany looming ahead of them. Far from getting it out of her system, Nora was about to get a reality check by the name of Lance Boffman, and Travis didn't want to be anywhere nearby when it happened.