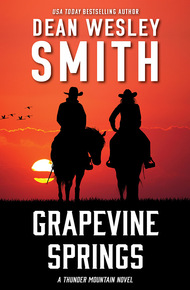 Could the entire history of an Old West mining town be false?

Did Grapevine Springs ever really exist?

Duster Kendal wants to know the answer to that question. But to get the answer, he must turn for help from two top researchers who must risk everything, including their lives, to find the answer.

Duster Kendal sat high in his saddle, turning slowly in all directions, staring at the surrounding small valley in the warm afternoon sun. The hills were pine covered, the valley floor itself fairly wide for a mountain valley, with a gentle fall from north to south that allowed Grapevine Creek to meander back and forth from one side of the valley to the other, forming great stream banks under grass and weeds for trout to hide.

He wore his long oilcloth brown duster over a thin long-sleeved shirt and jeans. His face and head were sheltered from the high-mountain sun by a brown cowboy hat.

At six feet tall and with the long, flowing coat, he made an imposing figure in the saddle.

The air around him had a hot-pine smell and only a very faint breeze even rustled the brush under the trees.

A place he might want to spend some time in.

But it shouldn't be.

This was the location, he was sure of it.

He just shook his head and rode slowly over to a stand of tall pine jutting off a ridgeline and into the valley floor, working his way through the grass. The trees would give him shade, a place to camp, and time to figure out what was happening.

He dismounted, allowing his horse, Sandy, to graze close by while he took his canteen and a map from his saddlebag.

He had printed the map before he left 2020 to come back to 1901. It looked like an old map of 1900, only with far more detail than most maps of this time could manage.

He studied the map, then the valley around him.

This was the right place.

But he should be far from alone standing here.

It had taken him eight years to finally get to this remote valley north of the Salmon River in Idaho, even though it had been the stated reason for his trip back into time.

He had spent the first years helping once again to build the big log Monumental Lodge on the ridge above the mining town of Roosevelt, Idaho. He loved the two years building that lodge every timeline he helped build it in. And he loved more having it always there to stay at.

Then, after building the lodge, he had gone to Denver to play some poker for a couple years. That had been fun. The poker games in Denver just after the turn of the century were the best anywhere in the country.

But now he was back in Idaho, on a mission that had puzzled him and others for years, both here in the past, and in the future.

His mission: To find Grapevine Springs, the mining town.

He again studied the steep-walled valley as he took a drink from his canteen, letting the cool water wash down some dust.

For the next thirty minutes he checked and double-checked every detail. He was in the right spot.

But there was nothing here but a remote valley.

At this point in history, Grapevine Springs should be winding its mining days down, but at least five saloons and two thousand people should still be in this area right now.

But clearly that had never happened. There were no trails into this valley, let alone a wagon road. As far as he could tell, the entire area hadn't even had anyone go through it besides Native Americans, let alone been settled by miners.

But it was supposed to have been.

Grapevine Springs was a very real town in 2018. A former mining town turned tourist and ski town. The tall hill across from him was covered with snowboarders and skiers in the winter, with runs cut through the stands of pine.

In January of 2018 he had stood on this very spot, actually, on the deck of a condo he owned, watching the skiers on the hill across the valley.

The history of this town was well documented in a museum in the town's center, plus in the Idaho Historical Society.

Supposedly, a married couple named Watts, prospecting out of the Missoula region, had stumbled upon color in pans in Grapevine Creek around 1901. Good color, from all reports.

They and a dozen silent partners out of Boise had managed to get claims in on most of the ground in this valley and had built the town of Grapevine Springs, selling off parcels of land to stores and saloons and other businesses.

At one point, Grapevine Springs had bragged that it had over ten thousand people in it working dozens of mines up and down the valley. That had been before the gold died down and the town receded back to almost a ghost town with only a few winter residents and a couple hundred landowners coming in during the summer.

In 2002, a group of investors, looking to build a major ski area destination resort like Sun Valley, visited the ghost town of Grapevine Springs and liked the beauty and the fantastic mountain and the winter snow, acclaimed to be some of the best and lightest in the west.

Three years later the resort opened, and it grew every year since into a major tourist attraction for the State of Idaho.

But in all of Duster's years living in the past, beyond ten thousand years now from what his wife Bonnie told him, almost all of it in parts of Idaho, he had never heard of Grapevine Springs as a mining town.

In fact, at one point or another, he had been the town sheriff or marshal for most major towns in the west.

So it would be impossible to not know about a major mining town here, especially that late into the gold-town period.

So Grapevine Springs flat didn't exist in this timeline. Or any of the other thousand timelines he had visited.

Someone, for some reason, had planted the history of Grapevine Springs in historical records.

So it actually was a real ghost town, because in the past it had never existed.

At least not in this past.