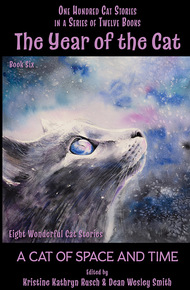 The Year of the Cat: A Cat of Space and Time by Kristine Kathryn Rusch and Dean Wesley Smith

Cats often live in the world of science fiction and fantasy. Anyone who knows cats knows they bend time and defy gravity.

They walk through life seeming not to care about day-to-day events around them, and yet in the blink of an eye, they sense danger as if they see into the future.

Cat people also know their cats observe their human slaves for space aliens. We don't mind, really. Of course, most cats, like nature, abhor a vacuum, so no technology for cats past a good can opener.

This volume focuses on cats in space and time and includes two helpful poems for those who still wonder about their cats' occupations.

Includes:
"Ten Ways to Know if Your Cat is a Space Alien" by Geoffrey A. Landis
"The Goddess Particle" by Daemon Crowe
"All Cats are Gray" by Andre Norton
"The Game of Rat and Dragon" by Cordwainer Smith
"Nefertiti's Tenth Life" by Mary A. Turzillo
"Chimera" by Kristine Kathryn Rusch
"The Frayed Edges of the World" by Annie Reed
"Surfing the Swale" by Lisa Silverthorne
"Cat in a Hole" by Dean Wesley Smith
"More Ways to Tell if Your Cat is a Space Alien" by Mary A. Turzillo

Cats have a natural home in the world of science fiction and fantasy. Most of the cats I have lived with seemed, at times, to be able to bend time. At other times they seemed to be able to defy gravity.

They are creatures that just walk through life seemingly without caring about normal events around them, and yet they can sense danger as if they have the ability to see into the future.

Of course, most are afraid of vacuum cleaners, so their reach into the science fiction world does not extend that often to technology. Just space and time.

So, in this volume, that is the focus of the eight stories and the two bonus poems about cats and space as well.

Here are titles of the twelve volumes of cat stories we are putting together.

A CAT OF A DIFFERENT COLOR

A CAT OF PERFECT TASTE

A CAT OF DISDAINFUL LOOKS

A CAT OF STRANGE LANDS

A CAT OF COZY SITUATIONS

A CAT OF HEROIC HEART

A CAT OF ROVING NATURE

A CAT OF ARTISTIC SENSIBILITIES

A CAT OF FANTASTIC WHIMS

A CAT OF FERAL INSTINCTS

A CAT OF ROMANTIC SOUL

In the earlier volumes we had a few stories of cats in situations that involved space and time, often time. But for this volume, every story centers around the time and space and science fiction element in regard to cats.

We also added two poems from two of the best working poets in all of the science fiction and fantasy fields of literature. And both love cats.

We hope you enjoy this adventure into time and space, directed as much as possible, by the cats involved.