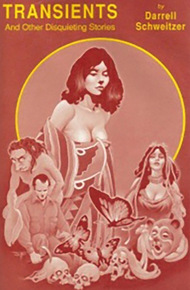 Darrell Schweitzer is the author of about 350 horror, fantasy, and (occasionally) science fiction stories. His work has appeared in Twlight Zone, Amazing Stories, Interzone, Fantasy Tales, Weird Fiction Review, and many anthologies. His novels include The White Isle, The Shattered Goddess, The Mask Of The Sorcerer, and The Dragon House. He is an expert on Lord Dunsany and H.P. Lovecraft (and has published books about both) and is a former editor of Weird Tales (1988-2007). He has been nominated for the World Fantasy Award four times and won it once, as co-editor of Weird Tales. His 2008 novella Living With The Dead was a Shirley Jackson Award finalist. Recently, PS Publishing (UK) has brought out a two-volume retrospective of his best fiction, The Mysteries Of The Faceless King and The Last Heretic (both 2020). He is also an active anthologist, having most recently edited The Mountains Of Madness Revealed (PS Publishing, 2019).

Transients and Other Disquieting Stories by Darrell Schweitzer

Darrell Schweitzer's TRANSIENTS is, as the subtitle suggests, disquieting. It was his first collection aimed specifically at the horror market, when he was selling stories regularly to such markets as Night Cry, Rod Serling's The Twilight Zone Magazine, The Horror Show, and such anthologies as Masques IV and Obsessions. These are genuinely disturbing, intimate stories of nightmares that don't seem to end, of lives gone askew, and of strange subversions of what we think of as "reality." Many are terrifying. A couple are darkly funny. They will keep you up at night. This collection was a finalist for the World Fantasy Award in 1994.

This volume includes the following 15 stories:

•"Transients"
•"Peeling It Off"
•"The Throwing Suit"
•"Jason, Come Home"
•"Pennies from Hell"
•"The Man Who Found the Heart of the Forest"
•"Clocks"
•"Soft"
•"Leaving"
•"Short and Nasty"
•"The Man Who Wasn't Nice to Pumpkin Head Dolls"
•"The Children of Lommos" (withJohn Gregory Betancourt)
•"Seeing Them"
•"The Paloverde Lodge" (withJason Van Hollander)
•"The Spirit of the Back Stairs"

•Creepiness is one of the hallmarks of weird fiction in all its forms…a disquieting feeling of dread that rises throughout a book or story. The dread isn't always explained or exposed or dispelled; often, it lingers past the end of the tale, all the better to haunt the reader for days or years to come. Darrell Schweitzer is a true master of this ambience, and he exploits it to fantastic effect in this volume of tales from the top shelf of his personal weird fiction trove. Like Rod Serling before him, Darrell puts his characters through the wringer in deeply personal ways, upending their sense of self and reality without rational explanations. In one story, a man with a home, wife, and friends becomes strangely dislocated, ending up living on the street with only the other homeless as his companions. In another story, pumpkin-head dolls taunt and threaten a man, then eventually claim the ultimate price for his bad behavior. What led to the creation of the Throwing Suit from the story of the same name, a bizarre article of clothing that transports an artist beyond time and space? How did the demons of "Pennies from Hell" come to be, and what inspired their fiendish fascination with coins? Answers of a sort are offered, but none really sew up the loose ends and mysteries in these tales. In that way, Darrell brings us the very best of weird fantasy/horror/suspense—fiction that is rooted in the "disquieting" nature of our own world and lives, just as the title of this collection suggests. – Robert Jeschonek

From "Transients" in Transients and Other Disquieting Stories

I remember a rowhouse in West Philadelphia where the stained wooden paneling and reproduction antique furniture and the fire in the fireplace on a dark November evening all conspired to produce the pleasant, if incongruous, atmosphere of an Olde Countrie Inne. I remember sitting by that fire so many times in a padded chair, listening to the flames crackling, and the sounds of my wife preparing dinner in the kitchen at the back of the house.

I remember my wife, too. Her name was Martina, but at times it seems I have only one image of her remaining: that of her bringing me my slippers and the newspaper as I sit in that chair by the fireplace after a long day's work. That isn't right. It makes her seem more like a faithful dog than a person, but she really did do those things, from her own sense of routine, infusing order into the world around her. I remember the repeated things. Most of the rest melts away, like mist before the sun.

I remember, finally, the pair of slippers she brought me on a particular, foul November evening. They were made of brown leather, with white fur around the edges, and were very worn.

I held them up.

"But these aren't mine."

She shrugged. "Whose are they then? It's your feet that have been going in them all this time."

Now she looked at me strangely. "Since the summer before last, when we got them at that Indian place in Maine. Don't you remember?"

I put the slippers on. They certainly felt as if I'd been wearing them since the summer before last. I retreated into making a joke about it.

''Ah, yes, the Squash-a-ma-quoddy Indians. How could I forget?"

She didn't laugh. She just said, ''Alan, your brain is going soft," and went into the kitchen to resume her cooking, leaving me sitting there, staring down at the slippers. Now there is little terror in a pair of slippers, but I felt a touch of unease just then, like that first, subtle, downward jolt when the elevator cable begins to fray.

I must have known somehow that right there it began. From that instant, we began to drift apart.

I try to remember.

"Gabby stayed late at school for band practice," Martina said over dinner. "Then she'll be at Alice Conover's for a while."

Gabrielle was our daughter, aged eleven, and Alice Conover was her best friend. I still remember that much, although I can barely call them to mind.

"Oh, and by the way, Joe Meese called from work after you left, and said he's hosting another of his poker parties tonight. Why don't you go? I wanted to watch something on PBS anyway."

I went. By the time we had finished eating and the dishes were cleared away, the wind was gusting outside, and rain and sleet rattled against the windows, but I had decided that, yes, a night of gambling away pocket change and telling dirty jokes was the very thing for the indefinable unease which had come over me. I put on a coat and a thin plastic raincoat over that and went to the door.

"Don't be out too late," Martina called. "It may be Friday, but we have that flea market tomorrow."

"Yes, yes, I remember. See you about eleven."

I stepped out onto the porch and locked the door. It was as I turned and reached for the iron porch gate that I noticed a man standing on the sidewalk in front of the house, huddled in a shapeless coat, bareheaded and dripping in the savage weather.

He was old, perhaps sixty-five, and disheveled, but he wasn't threadbare or filthy, and he lacked that empty look the city's population of homeless lunatics usually have. He wasn't a bag person. He just looked ... lost as he stood there, not exactly staring at me, or anything in particular. The thought came to me that he might be a burglar scouting out the neighborhood, but I flinched inwardly at the sheer absurdity of the idea.

I stood with one hand on the gate.

"May I help you with something? Are you looking for someone?"

His eyes met mine briefly, and for an instant his face came alive, first something almost like joyful recognition, then sadness, then that blank expression again. He merely stood there in the rain and cold, and I was the one who began to shiver.

Still he stood there silently. I debated going back into the house rather than leaving Martina alone with this guy just outside, but I didn't. I tried to shrug him off as one of the city's peculiar sights. So I opened the gate, stepped through, shut it again, and walked briskly down the steps, and started to get into my car.

Then I noticed that the man was pointing at me. His hand was shaking, not from cold, but for gentle emphasis, as if to say, yes, I know you. I know everything.

I got into the car quickly, slammed the door shut, and locked it, then looked up to see the stranger walking away from me toward the end of the block. I watched him go until he was around the corner. Then I started the car. When I got to that corner, I looked for him, but he was gone.

There. There, too, it began.