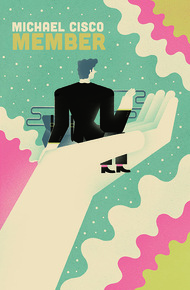 Member is the account of how Thanks (the narrator) "accidentally recruited" himself into "the cosmic game of Chorncendantra." On a night stroll, he finds himself behind another walker who apparently dies and recovers. The bag carried by the unknown Lazarus passes into his possession. Investigating, he discovers that it contains a dimensional hole to another world. By accident or design, as bearer of the bag, he is now a courier, carrying messages in a cosmos-wide game he does not understand. Arriving at "the Artifact" (a vast and never-finished machine in the form of a world-dividing wall that manufactures time), Thanks attempts to decipher his own role in the game, to determine whether he can ever become, or already is, or never will be, a member.

•I love books in which the nature of reality is very fluid, and the possibilities of existence are limitless. Even better, I love books and stories that feature surreal environments, characters, settings, and situations, much like those in Michael Cisco's tour de force novel, Member. I can honestly say I've never read anything quite like this book, which I think is one of the highest compliments I can pay to any author. Cisco's protagonist, whose name is Thanks, receives a bag with a dimensional portal inside…and ends up swept up in a bizarre cosmic game called "Chorncendantra" that seems to have no rhyme or reason. Along the way, Thanks encounters Operationals, High Rationals, and other strange beings rendered in utterly unique ways. Throughout all this, Cisco never lets his wild tale stray too far into the realm of nonsense or randomness for the sake of randomness. That's one of the things I admire most here, that the author explores the far reaches of his imagination and presents a stunningly surreal fable while somehow keeping it all grounded and maintaining a level of narrative tension that pulls the reader through from start to finish. Member is extraordinarily weird in the best sense of the word, unforgettable in the extremity of its imagery and stream-of-consciousness flow…but it always keeps me interested and never loses sight of its underlying themes and commentary on the nature of our own reality, which is equally bizarre in its own way. – Robert Jeschonek

Is this Earth? When did I leave? How long has it been?

Rip Van Winkle ran off with the fairy ninepin players and drank their speed-o'-light drink, came back after hundreds of years. To what.

There go the clouds. The colors dim out into the blue, in a way the creatures never did. The triangles fill up my vision with scales that follow the contours of light and dark in the azure dome of the sky. Eventually, I find myself rolling over onto my stomach. I get up, not daring to turn my head, keeping it and my neck just where they are. No sign of Down jacket, or Butterball. There may be figures well off that way; a few men in white shirts, with dark trousers, and neckties. Some women in skirts. They are walking on the walls and in the trenches, with their arms above their heads.

Let them do their thing. With great care, I settle myself, perching on the edge of the wall, then slide off onto the heap of stones, tobogganing down to the floor of the trench on my ass. My neck jolts a few times and my head hurts – not my neck.

... For the past eight or nine hours now I've been trying to cross the trench. No way to tell how long it has been.

I find myself watching my own body from a distance, like it was a character in a film. There I am, half in a heap.

The bag is still looped around my shoulder, but it swings wildly with my drunken swaying.

My legs skid out from under me and I drop to the ground again. I end up perched on the far corner of my left hip, my body stiff and curved like a boomerang, as I try to coil my self together. My legs have to be thrust forward and held together to ballast the rest of me. I look incredibly bad. My features have a dirt outline, there's dust in my hair, and my lower lip is swollen. Maybe I hit it on something and failed to notice in the general festival of injuries. Finally, I watch myself tip forward and music begins to play, the lights in the background begin to pulse and swim, and dancers of both sexes, dressed in sparkling white tuxedos, descend to the floor of the trench in files, chugging their arms like locomotive pistons.

Oblivious to this, myself has gathered on folded knees and droops, careful not to allow his tottering head to settle on the gravel, though he seems tempted.

"Don't do it you bastard. You'll only drive bone fragments into your brain that's messed up enough as it is. Your brain is broken already."

The eyes bug, and I only manage to catch the little mouthful I spit up behind the palm. It's a good thing the dancers have on their roller skates; they're rolling around me now, arms linked across shoulders in a series of nested orbits, gliding smiling and turning their heads this way and that. Through the music someone cries, "Chorncen-dan-tra!"

I jerk around and confront a severed head. Clamped between the hands, held high above the gushing stump, the open throat, the front rinsed with thick gore, the body engulfed to the waist in the top of the artifact. The huge globes of the Newest drop in two stately arcs and meet like a pair of complacent hands folding, directly above the tear-streaked, contorted face. My body flails backward in shock at the sight and lands on the back, jarring the head violently. He clutches the back of his skull in his hands, barking with pain.

The dancers encircle him. Their hands pick him up, and carry him to the howling head. The body struggles, shouting with pain and fright. They dredge him in the flow of silvery mirage blood that spews from the now towering giant, a stream of black and silver mirage boiling from red and gold robes and forming a stream of thick mirror froth. The last I see of him, myself that is, he is engulfed in blinding silver foam, a scream gurgling sin his throat, staring pin-pupilled into the gush ...

I'm exhausted. I've never been so tired. I'm getting more tired with the effort of noticing how tired I am.

As the head-holder in front of me gradually takes his leave, emanations from the Newest come swirling down around me like the spinning lights from a mirror ball, and the unvarying, syncopated music it makes seems to dub me out in space as it recommences its regular communion with the artifact. Atoms of clear rationality, soft and radiant as falling snow. The pale blood congeals gradually.

I'm still covered in mirror mucus that hangs on me in heavy globs and smells like grey mustard. When I happen to look, I discover a scrap of paper curled into my left hand, which has been lying ajar on my stomach. The scrap is covered in even printing:

Stay put. Getting the others down. Will come back. - Yunis.

"That's peachy," I say, and haul out my trusty bandage box. After looping the gauze around my head a couple of times, I feel drastically better and I manage to get on my feet. With my hips and knees locked under me for good measure.

Since it's possible to walk, I make my way over toward the far end of the trench. No sign of anyone. A mist has fumed up over in the direction where I saw the Newest. The mist is white, not blue like everything else.

A nameless combination of weakness and residual vitality. That's what I've got. It's ridiculous to head over toward the scaffolded side now. In my condition, I'd never make it down a nice gradual ramp, let alone that popsicle-stick highway. But, I suppose, being nearer to the path makes retrieving me easier. Assuming Yunis doesn't leave me here.

Something yanks the strap of my bag and spins me around. I nearly lose my balance, but only nearly, and the movement whips the bag around behind me as well. Loring is already trying to circle back of me too, so I keep turning.

Loring doesn't say a word. He's breathing hard, his clothes are in shreds, and his eyes are locked on my bag. He swipes at it drunkenly, and when he darts in close I can feel the heat roll from his body in waves. I'm getting ready to take a poke at him, when a high voice breaks in on us both:

"No interference with a courier."