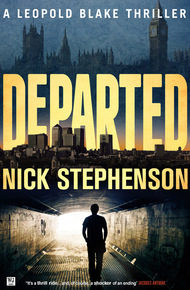 Nick was born and raised in Cambridgeshire, England. He is a fiction author and novelist, writing in the mysteries and thrillers genre. His approach to writing is to hit hard, hit fast, and leave as few spelling errors as possible. He writes mysteries, thrillers, and suspense novels, as well as the occasional witty postcard, all of which are designed to get your pulse pounding. Don't let his headshot fool you - he's actually full colour, on most days.

Expert criminology consultant Leopold Blake is having yet another bad week. While tracking a psychopathic serial killer through the streets of London, the reclusive investigator realizes with chilling certainty that history is about to repeat itself - with devastating consequences.

Where Scotland Yard and MI5 have failed, Leopold must find a way to hunt down and apprehend a ruthless maniac before he strikes again. And the clock is ticking. Now Blake and his team must face their greatest challenge yet: an unseen force, intent on wreaking havoc throughout the city, is hunting on its home turf - and Leopold is about to realize that the good guy doesn't always win.

It won’t take you more than a few chapters of Departed to uncover a stunning secret buried in the book’s subtext: Nick Stephenson is doing exactly what he was born to do. You can feel it in the writing, the flow, the tension that never stops rising. – Jason Letts

THE EARLY MORNING was colder and wetter than usual, and the moon provided only limited illumination as the hunter stalked the cobblestone paths that wound through the ancient city. London was a maze of densely packed alleyways and side streets, especially in the east of the city where he had chosen to spend his nights, and there were plenty of shadows and sheltered recesses that could be used to his advantage. It was still several hours until dawn, but only a few minutes until last call at the several dozen pubs and bars that lined the more well-lit areas, meaning his prey would venture outside soon.

The case he carried had room for sixteen knives, and it was full. He had lovingly sharpened each blade by hand earlier in the evening, placing them in the case in order of size – ranging from the tiny paring knife all the way to the butcher's cleaver. They were all strapped in tight and rolled up, making it easy and discreet to carry them around in public. Thanks to the predictable English weather, he didn't look out of place wearing the transparent raincoat, which meant there would be no need to burn his clothes afterwards. The surgical gloves would stay in his pocket for the time being.

Crossing to the end of the street, he stood in one of the pools of shadow that had formed just out of reach of the streetlights, keeping his eyes locked on the pub on the opposite side of the road. The King's Head looked dreary from the outside, but there was a considerable crowd within, all laughing and drinking away their lives, sheltered from the miserable weather outside. Within seconds, he caught sight of his prey as she passed by the window and allowed himself a smile.

Soon, her suffering would be over.

Several minutes passed and the pub's lights dimmed, signaling closing time. The front doors opened and the merrymakers began to pour out into the soggy streets, fumbling for their umbrellas and hoods as the fat raindrops caught them by surprise. His target followed at the rear, trying to catch the attention of the young men who had dawdled. She looked a little off her game tonight.

After a few minutes she gave up, slurring something inaudible at the last youth as he backed away and walked off with his hands stuffed into his pockets. Wavering slightly on the spot, the young woman leaned up against the pub's dingy walls for support. Eventually regaining her balance, she slung her tiny handbag over a bare shoulder and hugged herself against the cold.

The hunter caught her eye as she crossed the street, and she smiled at him. Stepping out into the light, he took her by the hand. She didn't flinch. After a few minutes they reached a more secluded part of the neighborhood, and he chose a sheltered spot where nobody would be able to see. She mentioned something about payment, and then began to put her hands on him. He resisted the urge to vomit in her face as the whore's skin touched his own, instead pretending to reach for his wallet. The bitch's breath stank of alcohol.

Pulling the surgical gloves out of his pocket and slipping them onto his hands, he heard the whore say it would be extra for the kinky stuff. He wanted to wrap his hands around her throat and squeeze until the larynx popped, but he knew he had to be patient. Methodical. There was an art to this that must be respected. Inhaling deeply, he pushed the thought to the back of his mind. The bitch asked about payment again.

His hand moved too quickly for her to register what happened next. The polished blade the killer carried in his pocket was light and strong, and he whipped the razor-sharp edge across the young woman's throat in one smooth motion, then again in the opposite direction. Nothing happened for a moment, and then the blood came. First in slow drips and then faster, the arterial pressure forcing the two wounds to open wider, spraying his waterproof coat with hot red liquid.

The hunter licked his lips slowly, tasting the familiar copper flavor as some of the blood coated his face. The whore's eyes were wide with shock, but there was no chance of her screaming as she crumpled slowly to the floor. The bitch even tried to grab at his raincoat for support, but it was slick with blood and no use to her. Within a few seconds she lost consciousness and lay still, her breathing shallow and weak.

He knelt and unrolled the case, selecting his favorite blade: a sturdy, six-inch knife with a carbon-fiber edge and excellent balance, and cut open her dress at the hem to reveal her naked body. Ignoring the fact she wasn't wearing underwear, he focused his attention on the exposed stomach area, using his fingers to detect where the first cut should be made. Satisfied, he slipped the knife's tip into her skin, peeling it apart with ease and opening a tear in her soft, white abdomen. There was very little blood left.

His heart pounded with excitement as her last breath drifted slowly into the night.

Now for the fun part.