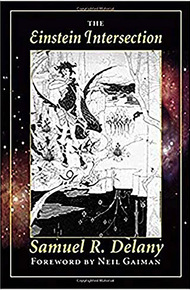 In 2016, Samuel R. Delany was inducted into the New York State Writers Hall of Fame. He is the author of Babel-17, Nova, Dhalgren, Dark Reflections, Atlantis: Three Tales, the Return to Nevèrÿon series, an autobiography, The Motion of Light in Water, and the paired essays Times Square Red / Times Square Blue. Dark Reflections won the Stonewall Book Award for 2008, and in 2015 he won the Nicolas Guillén Award for Philosophical Literature, in 1997 the Kessler Award for LGBTQ Studies, and only this year, the Anisfield-Wolf Award. As well, he has won Nebula Awards from the Science Fiction Writers of America, and two Hugo Awards from the World Science Fiction Convention. In 2013, he was made a Grand Master of Science Fiction, following in the steps of Asimov, Heinlein, and Le Guin. As e-books, paperbacks, or audiobooks, his works are available through his website at: www.samueldelany.com.

The Einstein Intersection won the Nebula Award for best science fiction novel of 1967. The surface story tells of the problems a member of an alien race, Lo Lobey, has assimilating the mythology of earth, where his kind have settled among the leftover artifacts of humanity. The deeper tale concerns, however, the way those who are "different" must deal with the dominant cultural ideology. The tale follows Lobey's mythic quest for his lost love, Friza. In luminous and hallucinated language, it explores what new myths might emerge from the detritus of the human world as those who are "different" try to seize history and the day.

•The best kind of magic tricks make it seem like they couldn't possibly be tricks. They can only be real, true magic with no sleight of hand or trap doors or false bottoms involved. The same can be said for the work of master writers like Samuel Delany. What trickery did he employ to contrive a book like this, in which an incredible premise, uniquely unhuman characters, an extraordinary setting, and deeply meaningful underlying themes unite to tell a story unlike any other you have ever read? It was good enough to win a Nebula Award for best science fiction novel of 1967, and it still seems ahead of its time today—an example of weird science fiction at its finest. In a nutshell, Intersection depicts a quest across a futuristic Earth in which alien beings have replaced humanity, a search for the lost love of a goat herder through the new world rising from the ruins of human civilization. It's an incredibly strange book, yet always grounded in those things held in common by the new rulers of the planet as well as the old: emotion, the need to survive, and the need to make sense of the chaos of life. Ultimately, it teaches us something about the power of myth and love, but it never lets up on the weirdness. In the hands of a writer like Delany, that weirdness is a joy to behold and spawns memories you will never forget. – Robert Jeschonek

There is a hollow, holey cylinder running from hilt to point in my machete. When I blow across the mouthpiece in the handle, I make music with my blade. When all the holes are covered, the sound is sad-as rough as rough can be and be called smooth. When all the holes are open, the sound pipes about, bringing to the eye flakes of sun on water, crushed metal. There are twenty holes. And since I've been playing music I've been called all different kinds of fool-more times than Lobey, which is my name.

Ugly and grinning most of the time. That's a whole lot of big nose and gray eyes and wide mouth crammed on a small brown face proper for a fox. That, all scratched around with spun brass for hair. I hack most of it off every two months or so with my machete. Grows back fast. Which is odd, because I'm twenty-three and no beard yet. I have a figure like a bowl­ ing pin, thighs, calves, and feet of a man (gorilla?) twice my size (which is about five-nine) and hips to match. There was a rash of hermaphrodites the year I was born, which doctors thought I might be. Somehow I doubt it.

Like I say, ugly. My feet have toes almost as long as my fin­gers, and the big ones are semi-opposable. But don't knock it: once I saved Little Jon's life.

We were climbing the Beryl Face, slipping around on all that glassy rock, when Little Jon lost his footing and was dan­gling by one hand. I was hanging by my hands, but I stuck my foot down, grabbed him up by the wrist, and pulled him back where he could step on something.

At this point Lo Hawk folds his arms over his leather shirt, nods sagely so that his beard bobs on his ropy neck, says: "And just what were you two young Lo men doing on Beryl Face in the first place? It's dangerous, and we avoid danger, you know. The birthrate is going down, down all the time. We can't afford to lose our productive youth in foolishness." Of course it isn't going down. That's just Lo Hawk. What he means is that the number of total norms is going down. But there's plenty of births. Lo Hawk is from the generation where the number of non-functionals, idiots, mongoloids, and cretins was well over fifty percent. (We hadn't adjusted to your images yet. Ah, well.) But now there are noticeably more functionals than non-functionals; so no great concern.

Anyway, not only do I bite my fingernails disgracefully, I also bite my toenails.

And at this point I recall sitting at the entrance of the source-cave where the stream comes from the darkness and makes a sickle of light into the trees, and a blood spider big as my fist suns himself on the rock beside me, belly pulsing out from the sides of him, leaves flicking each other above. Then La Carol walks by with a sling of fruit over her shoulder and the kid under her arm (we had an argument once whether it was mine or not. One day it had my eyes, my nose, my ears. The next, "Can't you see it's Lo Easy's boy? Look how strong he is!" Then we both fell in love with other peo­ple and now we're friends again) and she makes a face and says, "Lo Lobey, what are you doing?"

"Oh, really!" and she shakes her head and goes into the woods towards the village.

But right now I prefer to sit on the flat rock, sleep, think, gnaw, or sharpen my machete. It's my privilege, so La Dire tells me.

Until a little while ago, Lo Little Jon, Lo Easy, and Lo me herded goats together (which is what we were doing on the Beryl Face: looking for pasture). We made quite a trio. Little Jon, though a year older than me, will till death look like a small black fourteen-year-old with skin smooth as volcanic glass. He sweats through his palms, the soles of his feet, and his tongue. (No real sweat glands: piddles like a diabetic on the first day of winter, or a very nervous dog.) He's got silver mesh for hair-not white, silver. The pigment's based on the metal pure; the black skin comes from a protein formed around the oxide. None of that rusty iron brown of melanin that suntans you and me. He sings, being a little simple, run­ning and jumping around the rocks and goats, flashing from head and groin and armpits, then stops to cock his leg (like a nervous dog, yeah) against a tree-trunk, glancing around with embarrassed black eyes. Smiling, those eyes fling as much light, on a different frequency, as his glittering head. He's got claws-hard, sharp horny ones, where I have nubs. He's not a good Lo to have mad at you.

Easy, on the other hand, is large (about eight feet tall), furry (umber hair curls all down the small of his back, makes ringlets on his belly), strong (that three hundred and twenty­ six pounds of Easy is really a lot of rock jammed jagged into his pelt: his muscles have corners), and gentle. Once I got angry at him when one of the fertile nannies fell down a rock chimney.

I saw it coming. The ewe was the big blind one who had been giving us perfect norm triplets for eight years. I stood on one foot and threw rocks and sticks with the other three limbs. It takes a rock on the head to get Easy's attention; he was much closer than I was.

"Watch it, you non-functional, lost-Lo mongoloid! She's gonna fall in the-" At which point she did.

Easy stopped looking at me with his what-are-you-throwing­ stones-at-me-for? face, saw her scrabbling at the edge, dove for her, missed, and both of them started bleating. I put my all behind the rock that caught him on the hip and almost cried. Easy did.

He crouched at the chimney edge, tears wetting the fur on his cheeks. The ewe had broken her neck at the chimney's bottom. Easy looked up and said, "Don't hurt me no more, Lobey. That"-he knuckled his blue eyes, then pointed down-"hurts too much already." What can you do with a Lo like that? Easy has claws too. All he ever uses them for is to climb the titan palms and tear down mangoes for the children. Generally we did a good job with the goats, though. Once Little Jon leaped from the branch of an oak to the back of a lion and tore out its throat before it got to the herd (and rose from the carcass, shook himself, and went behind a rock, glancing over his shoulder). And as gentle as he is, Easy crushed a blackbear's head with a log. And I got my machete, all ambidextrous, left footed, right handed, or vice versa.

Yeah, we did a good job.

What happened was Friza.