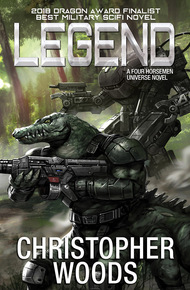 Christopher Woods, writer of fiction, teller of tales, and professional liar was born way too long ago to be talking about and has spent most of his life with a book in hand. He is known for his popular Soulguard series and creating the shared universe in The Fallen World series. He has also written several short stories and the Legend series in the Four Horsemen Universe as well as some works in the Salvage Title Universe. With books ranging from fantasy to post-apocalyptic science fiction and military science fiction. There should be something for everyone. He lives in Woodbury, TN with his wife, Wendy. As a former carpenter of 25 years, he spends his time between various building projects and writing new books. To contact him go to https://theprofessionalliar.com and send him a message or find him on Facebook at https://www.facebook.com/chris.woods.37.

Martin Quincy was a Legend. At a time when Humans were just starting to venture forth into the Galactic Union as mercenaries, Martin Quincy survived long enough to do something no one else had—he retired.

There was only one problem. He got bored.

After battling aliens for many years—killing aliens and getting paid—retirement didn't suit him, and he decided to strap on the combat armor and go back to the stars. Along with his old friend Kal, Martin joined Cartwright's Cavaliers, humanity's best merc company. Life was exciting!

But he got bored. Again.

What does a 'Legend' do when even the merc life gets boring? He starts his own company! Can Martin form a merc company out of non-merc races and stand up for the downtrodden of the galaxy, or has his long string of good luck finally run out? One thing is for sure—with Torvasi and Andori troopers, and a Sirra'Kan princess as his partner, he won't get bored again!

"I think the Cavalier should buy the next round!" Kal Turner yelled to a roomful of cheers. "Tommy! Set 'em up!"

"Thanks for volunteering me for that," I said with a grin.

"What are you worried about? You got plenty of credits."

"Just wait till you get your first payday from the Cavaliers," he said. "Lancer uses that 'court appointed' thing so he can set the pay rate wherever he wants to put it. I bet you make more in a year with them than he paid you for in ten."

"I'd bet on it. Lancer picks up cannon fodder from the courts. Occasionally, he gets something he didn't expect. That bonus you picked up at the ceremony was probably enough to make your pay what it should have already been."

"In a manner of speaking," I answered. "Couldn't stand the thought of ten years in a cage."

"It'd probably have been a lot safer," he returned. "Of course, you wouldn't have learned you were so good at killin' aliens."

"What have they got lined up for the 'Legend?'"

"Quit with that crap."

"You were right there with me through most of it."

"Yeah," he laughed. "In the safest place I could find—right behind you. No one was worried about me, they were all shootin' at you."

"I think every one of us got hit at some point," he said after a moment. "You hear about Goros?"

"He retired about five years ago."

"Couldn't take it," he said. "Came back about three months ago. Lost him and his whole platoon. Bad contract. Ran up against another merc unit. Some elite group from out in the Peco arm. It was rough."

I was silent for a moment, then raised my glass, "Here's to the Sarge."

"To the Sarge," he said as our glasses touched. "The man was fearless."

"Learned a lot from Goros," I said with a nod. "Sad to hear he's gone, but I guess he went out doin' what he loved."

"They said the mercs that took him down contacted Lancer and told him his forces were buried with honor after the battle was finished. He'd done better against them with a platoon than many had done with three times their number."

I raised my glass again, thinking of the Sarge. He'd come back after being given a way out of that life. Was I following in his footsteps? It was possible. But what else was there for someone like me? I specialized in a skill useless on Earth; killing. I didn't have any family left, being raised in an orphanage here in Wichita. There wasn't much to hold me here, and it wasn't the credits that drew me back. Half of the pay I'd earned over that ten-year span with Lancer had been donated to various orphanages around the country.

"I don't know about you," he said. "I plan to die in my nineties. I figure I'll have a heart attack while doing a twenty-year-old."

I motioned for Tommy. "Another round for the room! Let's all raise a glass to the toughest merc I ever worked with! Sergeant Jasper Goros!"

After the toast, Kal turned back to me. "Don't go and get yourself killed like that."

"I'll try my best," I said. "On my way to the Cavalier Compound tomorrow."

"Shit, Kal," I returned. "This is the Cavaliers, one of the Four Horsemen; they're all 'Legends.'"

"Then you'll fit right in, Brother."

I looked at the behemoth he was pointing toward. I had heard Cartwright had a hand in the design of a combat suit. This was the brainchild of Jim and a young robotics expert from London named James Taylor, with backing from several of the Four Horsemen. This was the first one I had seen, and it stood a little over ten feet tall, with a bulky body. The canopy was open, and we could see where the driver would mount the beast.

"This is what our Illustrious Potentate has given us to equalize things, just a little," he continued. "Some of you have been recruited after serving with other mercs, and we all know how overmatched we've been at times."

I nodded when he looked in my direction. There were three of us new to the platoon who had already been out in the thick of it. Most of the newcomers were young and fresh from the recruiting stations.

Devereaux pointed to the shoulder of the CASPer. "That is a swivel-mounted .50 cal with thirty rounds. The other side is graced with a 7.62 mm, rotating six-barreled machine gun that fires up to 6,000 rounds per minute."

I recognized the minigun as similar to the ones used on helicopters some years ago.

"I bet you do, Quincy," he said. "Considering what you ground-pounders were carrying before."

He turned back to the CASPer, "It can be equipped with various weapons where the mini is mounted, but they all come with the Fifty. There are reasons; some of the things we come against need to be hit with something a little bigger."

"Under the arms," he continued, "you can see the swivel that releases the blade you see here."

He pointed to a six-inch wide, three-feet-long blade mounted on the underside of the forearm that looked to swivel about six inches behind the "fist" of the mech. The "fist" was a solid chunk of steel at the end of a long arm that would reach the ground, if straightened alongside of the mech. It looked like it would make a hell of a club.

"Now, with all these advantages," Deveroux said, looking at all of us, "it also comes with some significant weaknesses. The battery pack will last about six hours with normal usage—half that in serious combat. Most of our time on the ground will be unmounted, with the CASPers on the charging vehicle you see over here."

He pointed to a vehicle that looked quite intimidating on its own—thirty feet long with an armored front compartment. There were six platforms, three to a side, that obviously held the charging stations for the CASPers.

"If we're on a short op, you'll drop in the CASPers. Longer ops will require the charger," he continued as he rounded the rear of the mech. "Here is another weakness inherent to the CASPer."

We followed to look at the back.

"Due to the design, if this beast ever ends up on its back, it's bad; the damn thing is hard to get back upright without help. Some of us have dubbed, them "the turtle," so try to keep them upright."

"That could be an issue," I muttered.

"What was that, Quincy?" Devereaux asked. "You said you want to be the first one to try it? Well, all right."

I chuckled. "Teach me to run my mouth."

The captain laughed. "Come on over, and we'll get you strapped into Eleanor."

"Eleanor?" I asked as I approached the CASPer.

"A lot of men have been inside Eleanor, Quincy," he said with a grin. "And even a good many women. She's used to it."

I heard several chuckles and a snort from the watching recruits.

"Step on up and have your turn."

I laughed, climbed up the front of the CASPer into the open compartment, and strapped myself in with the harness.

"Grasp the bar to initiate docking once you are in position," Deveroux said, pointing at the handle next to where my hand rested. "Then pull it inward."

The straps snapped tight around my body as the clamshell closed around me. Once the access was closed, cradles moved inward to settle against my skin.

The inside lit up as ports opened, and I could see the outside through a mirror system and an LED viewer in front of my face.

"Brackets operate the legs," came Deveroux' voice through speakers. "Forward for ahead movement and backwards for reverse."

I rested my feet into brackets that closed around my legs and pivoted forward and back. Simple enough, I thought.

"The joysticks operate the arms and the thumb controls on the top of the sticks will aim the guns."

I swirled my thumb across the top of the right stick and saw a red target box travel across the LED viewer; the left thumb moved a blue target box across the viewer. The triggers on the sticks seemed obvious as to their purpose.

"Well, Quincy," Deveroux said. "Now you're inside her, let's see what she can do."