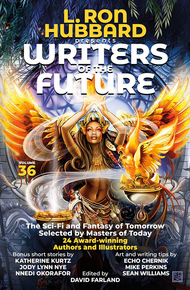 Writers of the Future Volume 36 edited by David Farland

The sci-fi and fantasy of tomorrow selected by masters of today: 24 award-winning authors and illustrators

Enter brilliantly realized worlds of dystopian politics, magical realism, post-apocalyptic adventure and romance, dark fantasy and more. Explore universes of unlimited possibility in which a cereal box becomes a Pandora's box of good and evil … a troupe of artistic androids risk everything to catch the eye of a critic … and the foundation of a family, the very key to their existence, is not only inhabiting a home, but becoming it. Discover the writers who push the boundaries—and break beyond them … the illustrators who envision the impossible—and render it real … the stories that challenge the way we see ourselves—and see the world in a new way.

Writers of the Future 36 Story Descriptions

How does one interpret the word of God so that an alien can understand? —A Word That Means Everything by Andy Dibble

The cereal-box toy looked like a TV remote, but the children discovered that it could fix anything, heal anyone—or change everything. —A Prize in Every Box by FJ Bergmann

A troupe of mobile drama androids risk everything by transforming during a play, desperate to win their way into the Moto-Odeum theater tour. —Automated Everyman Migrant Theater by Sonny Zae

Robo actors over-step their marks to win a spot in the Moto-Odeum theater tour and save their troupe. —Automated Everyman Migrant Theater by Sonny Zae

Know there is nothing here to harm you. Only your choices. Only yourself. The educational tapes will prepare you for your choice, "I accept" or "I decline." There are no other options. —Educational Tapes by Katie Livingston

On the outskirts of a war zone scarred by endless conflict, a lonely landmine decommission expert struggles to connect with his nonhuman partner. —As Able the Air by Zack Be

An alien invasion leads to a suicide epidemic on Earth, and years later one of the survivors, a hotel clerk, struggles to make sense of the events and reconnect with the world. —Molting Season by Tim Boiteau

Whether you catch a good death or a bad one determines the course of your life, unless you find a way to break free of the cycle. —Catching My Death by JL George

A house is supposed to protect its family, not turn on one of its own. —Foundations by Michael Gardner

An artist leaves her homeworld to perform for humans across the galaxy, but finds that everything the humans have given her people may pale in comparison to what they've taken. —Stolen Sky by Storm Humbert

An alien visits the International Space Station to provide a potential solution to climate change, for a price! —The Trade by C. Winspear

A guilt-ridden cargo captain on a remote mining colony decides to help a fallen angel who desires to die. —Trading Ghosts by David Elsensohn

Nathan Reed steals the opportunity to repeat his life and prevent his wife's untimely death. —Yellow and Pink by Leah Ning