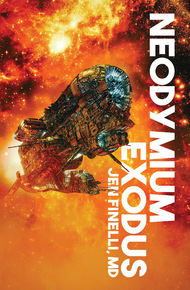 Jen Finelli is a world-traveling scifi author who's ridden a motorcycle in a monsoon, swum with sharks, crawled under barbed wire in the mud, and hiked everywhere from hidden coral deserts and island mountains to steaming underground urban tunnels littered with poetry. She was once locked inside a German nunnery, and recently had to find her way through swamp-filled Korean foothills dotted with graveyards on Friday the 13th under a full moon without a flashlight. On her quest to rescue stories often swallowed by the shadows, she's delivered babies, cradled the dying, and interviewed everyone from prostitutes to Senators. If you want cancer-fighting zombie fiction, dinosaur picture books, scientists jumping into volcanoes, or talking cars and peyote legislation, you might like Jen. You're welcome to download some of her stories for free at byjenfinelli.com/you-want-heroes-and-fairies, or join her quest to build a clinic for the needy at patreon.com/becominghero. Jen's a practicing MD, FAWM candidate, and sexual assault medical forensic examiner—but when she grows up, she wants to be a superhero.

Lem's a mace-wielding teen space-ninja in a universe of sentient insectoids, purple jungles, and insane electromagnetic fields. She solves most problems by hitting harder, and never plays by her enemy's rules—until Jared Diebol captures her.

Diebol is the rising leader of an army uniting the galaxy by force. He believes that the violent energy being Njande has "contaminated" Lem and her friends from another dimension to conquer the matter-based universe. Diebol's army usually kills contaminated people—but he vows to cure Lem.

When Diebol kidnaps Lem's family, he forces her to choose between the matter beings she loves and the energy person she adores. If Lem rejects Diebol's cure, her family dies—but if Lem cuts out Njande's energy, she opens our universe to a much darker thermodynamic attack.

A blend of hard biomedical science fiction with multicultural fantasy, Neodymium Exodus combines the introspection of classics like Perelandra with the vibrant boldness of modern best-sellers like This Alien Shore and Space Opera.

Everyone in the ice cream parlor froze when Lem Benzaran grinned.

Everyone except the meat man: the literal lizard in a suit, consummate businessman who dealt in favors and pounds of flesh—he didn't notice. His ruby-scaled claw left a streak of something like sweat on the plastic parlor table as he leaned over and cooed at Lem's little sister. Lem stirred the dregs of her milkshake, her eyes never leaving her glass: in its reflection she watched the string of drool drip down onto the monster's business suit. Lem was listening...listening to his heavy breathing.

"She ain't for sale, Skins," Lem said. She said it for everyone in the ice cream parlor to hear. She wasn't a big fan of warnings herself, but the people who ran her life required them.

The businessman's green hair puffed in offense; his slit eyes gleamed in the sunlight filtering through the wide storefront windows. "Mind yourself, witch," he sneered.

Witch, huh? Lucky for him he didn't call her crazy.

A loud slurp silenced the whole parlor as Lem finished off her shake, savoring the cool sweet cream on her bitter tongue.

Four seconds later Lem had chopped down the businessman like an overgrown holly bush. No one interrupted. No one helped, either. The space-lemur policeman in the corner stared at the phone in his paws, ears perked as he pretended not to see; the Wonderfrog server behind the counter tapped his bulging fingertips on his skull as if truly worried about dessert.

Lem tightened her grip on the meat-man's wrist, spitting through her teeth as she ground his face harder into the plastic table. "Whatever I am, everyone in here knows you're selling little girls to the greys, and one day I'll prove it and get Officer Scritch there off his duff for a change." Her voice dropped to a husky whisper. "But the day you talk to my sister again? Officer Scritch won't be lookin' for you. Won't be a you to find."

Meat-man grunted. He got it. A'ight. Lem straightened, wiping her brow on the sleeve of her rough brown civvies. She yanked the guy to his feet. He wheezed hard—she whacked him on the back. "Go, get outta here. See a healer about that asthma."

The ruby-scaled businessman stumbled between the cafe tables and out the wooden door, huffing and crying. Lem smirked after him—man, if only all problems could get solved like this. If they'd just let her off her leash, she'd turn the entire town upside down.

Lem's wristband lit up with an incoming message; she groaned. See, this, this was exactly the problem! I didn't violate any treaties this time, man, just roughed him up a little. How'd Captain Rana catch her so fast anyway?

"When rules matter more than people," Lem grumbled. She waved at her little sister: "Hey, Juju. We gotta go."

Juju slid out from the booth, eyes wide in her mahogany face as she licked the purple lechichi fruit topping her frothy cream-shake. Her hair, strangely-blondish for its tight, kinked texture, stuck out like a halo as she trotted head down, mouth shut and eyes open while Lem guided her, hand on this warm, bony little shoulder, out of the cool shadows of the parlor into the tropical heat of the Luna-Guetala sun. Good little girl. Pretty little girl—exactly what the meat-markets wanted alive and the greys wanted dead.

Lem's stomach knotted as she glanced at the message on her wristband again, then scanned the crowded black-earth street for someone on their phone or transmission screen. Who'd reported her? Man, she was always in trouble, but this was record time from beating up the perv to the "in-my-office-now."

The civilians stared back. Lem slowed her swagger to pretend she didn't care, shoulders back and chest out. Her military issue "civilian clothes" looked like she'd raided a tablecloth factory, and people liked to pretend there wasn't a war on.

That wasn't why they were staring, though.

It stung, you know. When people you protected feared you for the one thing that made life sweet.

Lem counted her tense paces along the blistering street, and took a deep breath of relief when she and her sister finally slipped into the shade of the jungle beyond the town. This, the soft velum of the leaves against her skin, the playful vines tugging at her ankles, the gentle give of the earth under her soles, this was home. Her toes longed to sprout claws and clamber up the bark of the nearest trees to hide from it all.

But she was human, and she had a human family now. Gone were the days of freedom in the treetops, hunting peacock-feathered guinea pigs and wrestling with her space-lemur brother. Lem set her jaw and unchained her sparrow-shaped air-rider from its roost, checking the camouflage engine for sabotage, small explosives, tracking devices…

"Why'd he call you a witch?" little Juju asked, shifting from one foot to another with a little ice cream slurp as Lem knelt to check the air-rider's undercarriage.

"Because I talk to an invisible guy," Lem said. "Same reason the greys want me dead."

"Well I noticed something," Juju said. Lem's fingers dug into a groove under her seat, tapping the gritty metal as she felt…

"Lieutenant Seria, and Dr. Patty—they don't talk to invisible people. But the Growen still want them dead, too."

Lem grinned. "Yeah, the greys kill anyone who don't like to be told what to do." She didn't bother to tell her sister that sometimes the other freedom fighters struggled to keep "witch" off their tongues, too. Juju didn't need politics yet. Lem hefted her up over the swooped wings onto the long bike-seat of the air-rider and swung herself up behind her.

"I wish we could go north to the city next time," Juju sighed. "I heard they got pretty birds, and glass airships like gems."

Lem laughed gently. "Quit tryin' to get me in trouble with your wishing." She revved up the engine—

Whoosh! Lem's stomach jumped backwards and Juju squealed as the air-rider zipped off into the woods. Lem leaned into the wind, oh, she delighted in the speed, the chill on her cheeks, the warmth of the little back pressed against her chest, the pure unfiltered joy—!

"I don't care if they saw you're crazy!" Juju yelled into the wind. "You're not!"

"I know!" Lem called back, laughing as the air-rider soared towards the treetops and then dove again—oh, a smile, in the ripples of air around her! Invisible fingertips brushed her forehead. "Njande, where are you?" Lem whispered.

Me? Her invisible friend's laughter tickled in the wind and flapping jungle leaves, and something like words, but not quite, flooded Lem from her spine to her fingertips. Me? Said the something. I Am Now. Where are you?

"I'm here on the double-planet, in the woods," Lem whispered back. "You know that, right? You mean, where in time, or something?" She didn't catch his answer. "Man, I can't hear you. Hey, what if I could race into your dimension? Go so fast I just bust through this thin reality, open a barrier in space time..."

I love your thoughts, Njandejara said. Look! I got you a surprise. Left, as you come around this bangla tree.

Lem hurtled around the trunk and looked—and leaned waaay back to slow the air-rider down hard. "Whoa!" she mouthed. She tapped her sister's shoulder in lit-eyed excitement, pointed left, and then let that finger dart to her lips to signal silence.

They'd have missed it if they hadn't been looking for it. A grove of thin trees rose lik a fence between the sisters and a sunlit clearing, and in that clearing grazed an enormous long-necked beast as long as a small skyship. Live butterflies covered every inch of its hide; if you knew what you were looking at, you could squint between the butterflies' wings and just barely make out green and yellow flowers growing from the creature's nose to its long tail. It was a reptile, a Behemoth—the tree-trunk-limbed giraffe-like jungle monster, sparkling like living gold with all those dainty wings.

The girls watched for a few minutes before the thing slunk off into a darker grove.

"Wow, I never saw one of those before!" Juju clapped as they started off again.

"They're shy," Lem smiled, crossing her arms across her chest. "Even when I lived out here I only saw one or two. Cool, huh?" To Njande, she mouthed: "Thank-you—I wouldn't have seen that."

I know! I saw you coming, and checked in the Back Then, and there I set up an airfield that pushed Tomorrow's storm south, so it broke early and drove the Behemoth up here!

"Wait...you saying you went back in time just to set up a view for me?"

Well, and a sister moment. She'll remember this one for a while.

Don't worry about Back Then. I Am Now, remember? Where are you?

Yeah, this Now, racing through the cool purple, red, green canopy with her sister, no bombs, no screams, no one shooting at her—this was as good as it got. Screw command, and the other soldiers, and the explanations and standing at attention that made her so nervous she got straight up silly—screw them all. This was the Now she was fighting to defend: her planet, her sister, her invisible best friend.

Maybe she could talk Captain Rana down to just two weeks scrubbing the slop chute after meals.