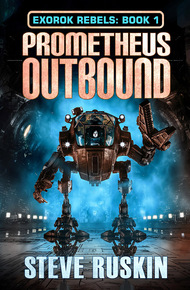 Amazon bestselling author Steve Ruskin writes science fiction with an hint of rebellion, and historical thrillers with an element of magic. Reviewers recommend his space opera series, the ExoRok Rebels, to "fans of The Expanse," while his supernatural thriller The Newton Cipher has been called "Dan Brown meets J.K. Rowling."

Steve is also an award winning historian, with a PhD in History of Science from the University of Notre Dame. His book America's First Great Eclipse is a bestselling account of the the total solar eclipse of 1878.

Noemi never wanted to be a rebel leader...

...but like any spacer, she rarely gets what she wants.

It's hard enough being the only female cargo foreman—make that forewoman—on Aikkan Station. Sure, she can pilot a mech with the best of them, and her team is made up of the finest mech pilots she could find. But when their boss runs afoul of the most ambitious Council Prince in the system, the repercussions are deadly—and they land squarely on Noemi's shoulders.

Accused of murder and in possession of an impenetrable secret, Noemi and her team are suddenly rebels on the run. Trapped on a stolen freighter and surrounded by the enemy fleet, their only hope is to plan a daring rescue right into the heart of enemy territory: the planet Aquitania.

With only their mechs as weapons, they must stage a daring rescue. If they fail, they're as good as dead. But if they succeed, they could alter the balance of power throughout the system—and maybe even the entire Empire.

A rebel leader, her unlikely team, and a handful of modified cargo mechs are all that stand between a chance at freedom... and certain death.

Armed marines formed a wide perimeter around the ExoRok bay. Noemi recognized them instantly—dark-blue, armored techsuits, round helmets with opaque faceplates, and the tell-tale red-star insignia of the System Council emblazoned on their chests.

Council Forces. The Aquitanian military. The name sounded benign, even benevolent. But they weren't there to protect anyone other than the Council itself, and to enforce their decrees across the system. And the recent changes to the Council's power structure meant that the Council Forces was now Jotheront's private army.

They were armed with plasma-pulse rifles, all pointing at the center of the bay, where a dozen or so of the Broker's crew cowered—men and women in techsuits of different colors, according to their jobs: lifters, engineers, cooks… even a man in a pilot's uniform. Noemi saw Lilia among them, and the two nurses she'd been walking with.

Takko, Kaiya, and Luuk stood among them too. Luuk and Takko looked sullen. Kaiya looked downright pissed off, with her hands on her hips and an icy, don't-touch-me glare on her face. Their empty mechs were nearby, the crates they had been moving now scattered on the metal floor at their machines' feet.

The bay wasn't so big that Noemi couldn't use her voice instead of the mech's built-in speaker. She still had to shout. "What's going on in here?"

A marine with red sergeant's stripes on his sleeve stepped forward. She couldn't see the face, but his voice was amplified by his helmet's built in speaker. "Foreman Noemi Ochana?"

"You are in currently in charge of this bay?"

"I am. Now what the hell are you doing with these people?"

"By order of the System Council, all ExoRok employees currently on Aikkan Station are to be taken into custody."

A chorus of voices erupted from the Broker crew. "What? Why?"

"Remain calm," the sergeant snapped. "This is a Council matter, affecting only the ExoRok employees. One hour ago, Prince Truum Aedar forfeited his seat on the Council. All his personal and corporate holdings are being placed under Council control, awaiting redistribution. All ExoRok employees are to remain in custody until their contracts are transferred."

"Bastards!" Teeni's voice crackled over the private comm. She'd shifted her Mastodon to one side of the docking ring so Noemi's Aurochs could enter the bay, and now they stood side by side in their mechs.

The sergeant crossed the floor to Noemi's mech and pointed up. "I need that crypbox you're carrying," he said. "Release it immediately."

"This is ExoRok property," she said.

"It's got a biometric lock keyed to a specific person. Even if I release it, you can't open it."

"That's no longer your concern, Foreman Ochana." The impatience in the sergeant's voice was growing. "Carry the crypbox to our shuttle docked on the far side of this bay. You will be escorted by one of my men—or two, if you need more encouragement. After you deposit the crypbox, you will return and join your former ExoRok employees for reassignment."

Noemi didn't want to leave her team. She also didn't know what to do. She needed time to think.

There was a pause, and Noemi could imagine the sergeant's teeth grinding behind his opaque face shield. "Fine," he growled, then began tapping at a small pad on his wrist.

Seconds later, a long legal document scrolled down her mech's control screen. She couldn't make sense of the legalese, but it looked legitimate. She pretended to read it, buying time.

The sergeant spoke again. "I assure you, we are perfectly within our rights to take everyone in this bay into custody, and to take possession of any and all ExoRok property. Or the ExoRok Corporation's former property." Former—that word again. Noemi didn't believe it. Didn't want to believe it. "Now please, take your mech and follow my men to our troop transport shuttle."

"That would be unwise." The threat in his voice was palpable. Two of the marines stepped out of their semi-circle and approached her Aurochs, their rifles aimed up at her cockpit.

"Don't do it, Noemi!" Kaiya's outburst was startling, in no small part because she'd always had such an easy-going, almost passive demeanor. Everyone turned. "These assholes don't have the guts to shoot you."

Takko reached for Kaiya's arm. "Easy, Kai… I don't want you or the boss to get hurt."

Kaiya shrugged Takko off. "Bullshit. We're citizens too! They can't do this to us." She left the cluster of ExoRok employees and walked toward the marines.

Takko gaped, watching her as she approached one of the armed men.

"You!" she said, pointing at him. The marine took a hesitant step back but pressed his rifle tighter against his shoulder.

Kaiya ignored him, jabbing her finger at the marine, poking his armored chest. "You think I'm afraid of you just because you have a gun? Well, I'm not. You're a thug." She turned in a wide arc, pointing. "All of you are! What are you going to do, shoot a defenseless spacer? A girl?"

"Shut her up!" commanded the sergeant.

Noemi assumed the sergeant was talking to her, because she was Kaiya's boss. But apparently, the marine thought the command was directed at him.

Before Noemi could tell Kaiya to back off, the marine turned his rifle around and slammed the butt into Kaiya's stomach. The girl doubled over, gasping, her hair tumbling over her shoulders. Looking as if she were trying to catch her breath, she rose up. The marine, perhaps thinking she was coming after him, brought his rifle down again—on Kaiya's head.

Noemi had a hard time remembering everything that happened next.