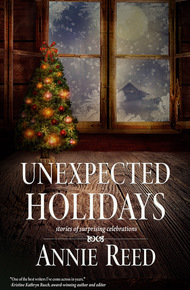 A prolific, versatile, and award-winning writer, Annie Reed's written more short fiction than she can count. She's a frequent contributor to Fiction River, Pulphouse Fiction Magazine, and Mystery, Crime and Mayhem. Her stories appear regularly on Tangent Online's recommended reading lists, and "The Color of Guilt," originally published in Fiction River: Hidden in Crime, was selected as one of The Best Crime and Mystery Stories 2016 (another one of her stories, "The Flower of the Tabernacle," also received an Honorable Mention). She's even had one of her holiday stories selected for inclusion in study materials for Japanese college entrance exams. Her Unexpected series of short-story collections showcase some of the best of her work.

Annie's a founding member and contributor to the innovative Uncollected Anthology series of themed urban and contemporary fantasy anthologies. She writes mystery, science fiction, and fantasy novels under her own name and suspense novels as Kris Sparks. She also writes sweet romance under the name Liz McKnight. She can be found on the web at https://anniereed.wordpress.com/

Christmastime, but with a twist.

That's what you'll find in the five stories in Unexpected Holidays. Celebrations that will surprise you while they warm your heart in the very best way. Feel-good stories to cozy up with on a cold winter's night.

And stories of the best possible starts for a brand New Year.

Christmastime, but with a twist.

That's what you'll find in the five stories in Unexpected Holidays. Celebrations that will surprise you while they warm your heart in the very best way. Feel-good stories to cozy up with on a cold winter's night.

And stories of the best possible starts for a brand New Year.

(excerpt from "The Old Guy")

Nick tried to get a job at a video store. He liked watching movies and knew quite a lot about classic gangster films, modern action-adventure flicks and feel-good romantic comedies. He even liked the independent dramas that put everyone else to sleep. The store smelled like buttered popcorn, and large windows at the front and along the sides made the place feel light and airy. Nick thought a job like that might be a perfect fit for him.

The manager told him she wanted someone who could clean used movies at factory speed so the store could put them up for sale, and she asked if his eyesight was good enough to see scratches on the discs. He assured her that his glasses worked just fine and he had decades of experience meeting deadlines so he was sure he could work fast enough, but she said she thought he was better suited for something slower paced.

He applied for a position at a used bookstore. He'd always liked to read during his summers off. Fat fantasies and over-sized thrillers, cozy mysteries and slim westerns, and romances that made his cheeks blush rosy red. He imagined days filled with the comforting smell of well-read paperbacks and the familiar task of sorting names in alphabetical order.

The pinch-faced bookstore manager spoke of a company philosophy based on continual criticism, and she gave him written tests with incomprehensible questions and illogical answers. For example, since when did a person's repeated inability to win a game mean the game was fixed? The manager assured him that was the right answer, but in Nick's experience, some people just didn't have an aptitude for games and there was nothing sinister about it.

The manager's thin face pinched even tighter when Nick shared his own philosophies about life and work and games with her. Even though Nick could calculate discounts in his head and recite the alphabet backwards, she thanked him politely and told him perhaps he should try placing a freelance ad as a life coach on Craigslist.

When Nick saw a Help Wanted sign at a self-service car wash, he stopped in to apply. He enjoyed being outside even when it rained or snowed, and the foamy, pink-tinged soap that bubbled up from long-handled scrub brushes reminded him of peppermint-flavored whipped cream. He assured the manager he knew how to make change and that he'd have no problem monitoring the equipment. The manager had him fill out a simple application, thanked Nick, and said he'd try to get back to him.

He applied for every position he thought he was remotely qualified for. As part of his job hunt, he took a number of increasingly bizarre online employment tests for which the Internet assured him there were no right answers but which he seemed only capable of answering wrong given the lack of response to his applications.

He even applied at Wal-Mart. They never called him back either.

It seemed like no one on the planet wanted a man with Nick's experience, his patience, his willingness to work, and most likely, his age. He thought about shaving his beard, or at least covering the bushy whiteness of it with a manly brown dye, but that felt too much like lying. Lying was a bad thing no matter how much psychobabble spin a person put on it. Nick wasn't a bad person. He just wasn't in high demand.

Well, no use crying over spilt milk, as his wife, god rest her soul, used to say. If no one on the planet wanted him, he'd just have to expand his search.