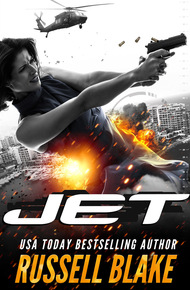 Featured in The Wall Street Journal, The Times, and The Chicago Tribune, Russell Blake is the NY Times and USA Today bestselling author of over thirty-five books, including Fatal Exchange, The Geronimo Breach, Zero Sum, King of Swords, Night of the Assassin, Revenge of the Assassin, Return of the Assassin, Blood of the Assassin, Requiem for the Assassin, The Delphi Chronicle trilogy, The Voynich Cypher, Silver Justice, JET, JET - Ops Files, JET II - Betrayal, JET III - Vengeance, JET IV - Reckoning, JET V - Legacy, JET VI - Justice, JET VII - Sanctuary, JET VIII - Survival, Upon A Pale Horse, BLACK, BLACK Is Back, BLACK Is The New Black, and BLACK To Reality.

Non-fiction includes the international bestseller An Angel With Fur (animal biography) and How To Sell A Gazillion eBooks In No Time (even if drunk, high or incarcerated), a parody of all things writing-related.

Blake is co-author of The Eye of Heaven, with legendary author Clive Cussler. Blake's novel King of Swords has been translated into German by Amazon Crossing, The Voynich Cypher into Bulgarian, and his JET novel into Spanish, German, and Czech. Having resided in Mexico for a dozen years, Blake enjoys his dogs, fishing, boating, tequila and writing, while battling world domination by clowns. His thoughts, such as they are, can be found at his blog: RussellBlake.com

Twenty-eight-year-old Jet was once the Mossad's most lethal operative before faking her own death and burying that identity forever.

But the past doesn't give up on its secrets easily.

When her new life on a tranquil island is shattered by a brutal attack, Jet must return to a clandestine existence of savagery and deception to save herself and those she loves. A gritty, unflinching roller-coaster of high-stakes twists and shocking turns, JET features a new breed of protagonist that breaks the mold.

Fans of Lisbeth Salander, SALT, and the Bourne trilogy will find themselves carried along at Lamborghini speed to a conclusion as jarring and surprising as the story's heroine is unconventional.

This is the first* novel in the JET series. The series is composed of the following books:

At this point Russell Blake is nearly a household name, largely because of the success of his JET series. Expect breakneck pacing, twists that hit hard against the back of the head, guns blazing, and exotic locales. Masterful. – Jason Letts

The rainy gray of the morning had grudgingly relented to a patchwork of blue peeking between the clouds. Moisture dripped from the dense vegetation onto the encroachment of asphalt, evaporating within seconds of contact. Humidity was a constant this far inland – the nation's seat had been relocated to this position of relative safety following the hurricane that destroyed the seafront capital forty-something years before.

The bus station at the main junction was a sad affair, as were most of the nearby structures, surrendering to entropy even before the paint had dried on their shabby walls. The terminal was surrounded by a group of ramshackle booths fashioned from tarps and cast-off wood, a squalid tent city that housed vendors hawking tacky artifacts and articles of second-hand clothing.

A retired Greyhound coach creaked as it entered the muddy lot, carrying a handful of intrepid tourists and commuters from the coastal suburbs. The tired air brakes hissed their protest as it pulled to a stop and disgorged its cargo, the rusting, graffiti-covered sides shuddering in time with the idle of the engine.

In the near distance, hulking concrete bunkers, ugly and indifferent, held back the jungle's creep. Lethargic bureaucrats in shirtsleeves seeped steadily across the expansive open plaza, mopping their brows with hand towels as they shuffled to their offices for another long day of doing nothing.

Three men emerged from the largest building and stood on the steps by the heavy glass entry doors, shielding their faces from the shafts of sun piercing the overcast. After a few parting words, they shook hands, and two of them headed to the parking lot. The third man watched their departure, his coal-black skin glistening with sweat that already threatened to ruin his lightweight navy-blue suit. He glanced at his watch then walked toward a multi-story edifice across the common. The fountain in the middle of the square, thick calcium deposits crusting the pitted centerpiece, hosted a squabble of sparrows intent on bathing in the rainwater accumulated in its base. Drawn by their raucous chirping, he slowed to watch them enjoy their brief reprieve from the oppressive heat.

A sharp crack startled the birds, causing them to take noisy flight as the lone man's skull exploded in a bloody splatter. His body crumpled to the concrete, dead before what was left of his head hit the ground with a melon-like thud. The few witnesses nearby froze in their tracks, eyes darting around in alarm.

On the top floor of an abandoned motel three hundred yards away, the shooter edged from his vantage point, cradling his rifle as he padded down the deserted stairs that led to the waiting Ford Expedition.

The driver put the vehicle into gear as the rear door opened, scrutinizing the chaos at the government buildings in his rearview mirror. The shooter slid the rifle into a compartment under the cargo mat and gave the vacant parking area a quick scan before climbing into the passenger seat. After fastening his seatbelt, he fumbled a cigarette from a pack in the glove compartment and lit it, adjusting the air vents to direct cold air on his sweating face as the driver pulled onto the road leading out of town. He exhaled in satisfaction, then lowered the window a few inches, and made a hurried call on his cell phone, speaking in a harsh, heavily-accented whisper before hanging up.

With a practiced motion, he flipped the phone's case back off and tossed the single-use sim chip and the battery through the open window, into a tangle of brushwood. The driver eyed him without comment and then returned his attention to the wheel.

The shooter took another drag and cracked a feral grin.