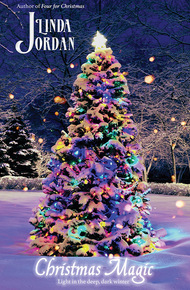 Linda Jordan writes complex characters, visionary worlds, and imaginative fiction. She creates both long and short fiction, serious and silly. She believes in the power of healing and transformation and many of her stories follow those themes.

She lives in the rainy wilds of Washington state with her family, a glaring of cats, a cluster of Koi and an infinite number of slugs and snails.

Her most current series is The Islands of Seattle. Set in the future after our world has been devastated by too many things and magic returns.

Four stories of hope, healing and magic to light up the darkness of winter.

A daughter trying to cope with her father's illness. A man dealing with his broken heart and money struggles. An older woman suddenly alone. Lastly, an Amore who's stuck until she can discover how to grow.

Includes the stories: The Christmas Mug, Sexy Santa, Marta and the Christmas Cat, and Stuck.

Readers in search of comfort during the cold months, should settle in with a hot cup of tea, a warm blanket and this book.

Beatrice sat in the near-empty coffeeshop across from the hospital, hands wrapped around the paper cup of strong mint tea with honey. It warmed her hands but the rest of her felt cold and numb. The sound system played jazz which barely kept her awake and annoyed her with its dissonance, all at the same time.

She should have ordered black tea, but her stomach couldn't handle it. The awful burger she'd had at the hospital cafe last night still roiled around in her stomach.

She smoothed her wrinkled jeans. She hadn't been home to change since the ambulance came. This was the first time she'd left the hospital.

Dad was dying. Beatrice had spent the last two years taking care of him, not out of duty, out of love. She'd taken a leave from her high paying tech job and moved back home into the house her family had lovingly tended since before her birth. Watching Dad's slow decline in health, she took technical writing jobs and worked at home.

She'd watched his gradual painful descent into Alzheimers. For the last few months he'd had no idea who she was, and kept calling Beatrice by her older sisters' names, Meredith and Hannah. She'd been able to mostly let that go, and not take it personally. She had chosen to take care of him, while her sisters lived in other cities far from Seattle, mostly ignoring her reports on his health.

Until the accident two days ago.

She'd been in the shower. He tried to go up to the second floor of the house and fell, hitting his head on the wood bannister.

She'd stayed at the hospital, sleeping on a cot in his room. Feeling terribly guilty until the doctor said, "You do know, he's been rapidly declining for the last six months. There was not much you could do, short of clone yourself. You might have been using the toilet and the same thing could have happened. At worst, what you did was speed up his decline by a month or two. At best, you shortened the amount of time he will spend in very severe decline, completely unable to relate to the world."

Finally, Beatrice had gotten hold of both her sisters.

"You should come. The doctor says he's not going to recover."