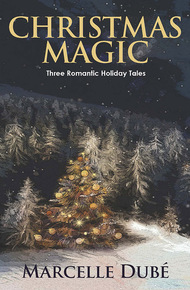 A Yukon Christmas: After her 20-year marriage collapses from inertia, Beatrice Talsma sets off on a year-long, cross-Canada journey to discover where she truly belongs. In a complete break with the past, she rents out a cabin in the Yukon wilderness. It's a wonderful spot, except that her closest neighbor, Henry Pekarik—also her landlord—seems determined to help Beatrice out, whether she wants it or not. It's becoming harder and harder to resist the man but the real test comes when he invites her to Christmas dinner with his family.

McKell's Christmas: Deputy Chief of Police Rob McKell doesn't trust Christmas. Two of his ex-wives left him at Christmas. Besides, bad guys don't take time off during the holidays so why should he? But when the chief orders skeleton crews at the detachment for Christmas Eve and Christmas Day, he has no choice but to comply. Not that he minds, really. He has a Christmas Eve date with the lovely Jillian for the all-important meeting of her friends.

But before the evening ends, Jillian's dangerous past will put both their lives and their fragile new relationship at risk… and prove that McKell's misgivings about Christmas are well-founded.

Running Away from Christmas: When Faith decides to escape Christmas and her friends' matchmaking efforts by spending the holiday alone in the big city, she never expects to find Christmas waiting there for her.

"Where the heck is she going?" asked Gaby.

Henry looked up from the six hundredth potato he was peeling—he loved hosting his sister Gaby and her family, but they ate a lot, which was why she had come over early to help him. Except that she was spending way too much time spying on his tenant. He glanced past her shoulder to the window in the living room. From there, he could see the side of the cabin and Beatrice Talsma putting on her skis. His gaze automatically went to the heavy sky and he frowned.

None of your business, he reminded himself. She's made that pretty clear.

"I expect she's going skiing," he said calmly. "Are you going to help me with these potatoes?"

Gaby watched Beatrice ski away before turning back to him. "She's a good-looking woman, you know."

Henry kept peeling but kept his head down. Gaby would never change. She had been trying to fix him up with his new tenant ever since Beatrice Talsma moved in. He had to admit that she was a fine-looking woman. With those long legs, she was almost as tall as his six feet, and she was lean but with enough curves to keep a man's interest. What he liked best about her was her eyes—deep, deep blue, with laugh lines around them. Not that she smiled much. Only when she was rebuffing his offers to help.

But the woman wasn't interested. She'd made that clear in dozens of little ways.

She wants to be left alone, he reminded himself. Leave her alone.