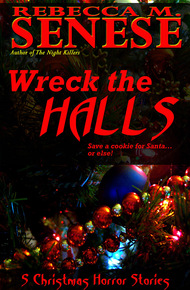 Add some horror to your ho-ho-ho with these five gruesome Christmas tales: A boy waits for Santa… with an axe! Who is the man in red and why is he stalking Randy? Sinister reindeer cause trouble for Billy. Santa finds more than presents under the tree. Forget shopping, try to escape the mall alive this Christmas Eve!

Boy, the axe was heavy, thought Timmy as he dragged it up the basement stairs. It had never looked that heavy when Daddy raised it above his head, swinging it down to chop wood in the backyard or when he waved it at Momma as she cowered in the corner of the kitchen, her nose dripping bloody snot onto the worn yellow tiles. Daddy must be as strong as Superman to be able to lift it so high, thought Timmy.

He reached the top of the stairs and had to lean against the wall. His seven year old arms ached from dragging the axe. Each time it lifted and then bumped on the next step, the reverberation shuddered up his arms into his shoulders. He wanted to let go of the axe and stretch, but the one time he did that, it fell down three steps and he had to run to stop it before it fell all the way back to the basement. It was hard enough drag it up to the top, Timmy wasn't gonna do it again.

While he paused, he pressed his ear to the closed door and listened. No sound came from the kitchen on the other side of the door. Earlier, Daddy had passed out in the living room, forcing Momma to drag him to bed again. He always got angry if she left him in the living room. Sleeping in the recliner gave him a kink in the neck and if he got a kink in the neck, she was gonna get one too, he always said. So Momma would drag him to bed.

Normally, Timmy would help her as much as he could. At seven, he was shorter than most boys and rail thin, so even lifting one of Daddy's massive trunk legs was hard. But tonight was Christmas Eve and Timmy had to wait for Santa.

Keeping one hand tight on the axe, Timmy twisted the door knob and pushed. The door swung open behind him. He stepped up into the kitchen and yanked the axe up over the doorway. It thudded onto the tile. Timmy froze, listening. Had Daddy heard that thud? He hated being woken up in the middle of the night for no reason. Even if Timmy had a nightmare, he had to stifle his screams so he didn't wake up Daddy. Daddy had important work to do in the morning and needed his sleep. He got angry if he didn't get it.

He got angry most of the time.

Timmy heard only silence. He let out a sigh. His shoulders drooped. In the dim light from the back window, he thought the axe had maybe dented the tile but he couldn't help that. He set it down to close the basement door, careful to make sure it closed with a quiet click and not a slam, then he picked up the axe by the handle again. He wished he could lift it, wished he was strong enough, but it was just too heavy so he dragged it along the tile. It seemed to hiss as it scraped along the floor until he reached the carpet then it was quiet but harder to drag.

He had to make more effort, yanking it along in short bursts. Sweat trickled down his sides under his pajamas. His fingers cramped on the handle but he didn't let go. Through the worn feet of his pajamas, his toes dug into the carpet, giving him traction as he heaved the axe along. Finally he made it into the living room. He dropped the handle and sagged against the olive colored couch.

In the corner, the Christmas tree tilted against the wall. Lights hung haphazardly around it, mostly on the left side. They blinked in a random fashion, half of the bulbs burned out, the other half twinkling merrily. Daddy always hung the lights and never brooked any suggestions. If Momma ever tried, she got a back hand to the face.

Once the lights were up, Daddy lost all interest so Timmy could add the Christmas bulbs and tinsel as he wanted, as long as Daddy wasn't in the room. But with the TV in the same room as the tree, there weren't too many times that Daddy wasn't in the room, so Timmy had to be fast when he got the chance. The result wasn't as neat as Timmy would have liked. He couldn't reach too high up on the tree and Momma was always too scared to help. She had to be ready when Daddy wanted something so she was always hurrying to the kitchen. This left the top of the tree rather sparse and the bottom heavily decorated with tinsel and bulbs. Timmy did try his best, reaching up as high as he could on tiptoes. Once he tried to drag chair over but Daddy had been coming so Timmy had to abandon the effort.

Timmy hoped Santa understood and didn't expect it to be perfect.

In the pale, blinking light, Timmy noticed the stockings on the mantle weren't straight. Better fix that. He left the axe leaning against the couch and hurried over. Daddy had hung them the night before while drinking egg nog. "More nog and less egg," he kept telling Momma and then laughing. Momma had laughed too as she handed him the stockings. He'd bowed before taking them and pinning them to the mantle. Timmy had noticed right away they were crooked but Daddy's seemed so happy and Momma was smiling so he didn't say anything. It seemed so magical, that brief moment of joy.

Timmy finished with the stockings and stepped back. Much better. Daddy wouldn't even notice they'd been moved. Timmy felt a tiny burst of pride in his chest that squared his shoulders. Daddy would like the look of those stockings, thinking he did it himself. Maybe it would make his mood more pleasant on Christmas morning.

If he woke up. If Santa didn't come.