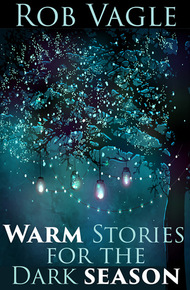 Rob Vagle is a writer of the weird and fantastic, of crime and noir, of wonder and imagination. His short stories have appeared in venues such as Realms of Fantasy, Strange New Worlds, Heliotrope, Fiction River, Pulphouse Fiction Magazine, and others.

He was born and raised in Minnesota, lived over a decade in Oregon, and now lives in Arizona. All these places (besides the more fantastical ones) can be found in his fiction.

You can find more information about his stories and books at www.robvagle.com.

Warm Stories for the Dark Season by Rob Vagle

In the darkest time of year you need hope and stories of wonder and light.

What you have in this collection are flights of fancy, friendship and love, and even a couple of holiday stories. However, this collection is not without darkness. After all, light is at its brightest in the darkest moment.

Hold on tight. The days are growing brighter and the daylight is lasting a bit longer. Here are eight tales to brighten the season. Stories, like warm burning lights, charm you and illuminate the dark.

Gordon had done an extraordinary thing when he was six and I was eight. From my bed I watched him sitting on the floor of our bedroom when he picked up the G.I. Joe—the classic foot tall kind with the fuzzy beard and painted one-dimensional eyes—and held it in front of him. Gordon puffed out his chest as he took a deep breath, and he kissed the Joe, his chest shrinking as air left his lungs.

Joe convulsed, arms and legs bending, head shaking. Gordon placed Joe standing in his black combat boots on the floor and watched me watching Joe. Joe turned around slowly, jaw dropped in awe. When he faced me, he blinked. His eyes looked at me with a light so intelligent, so alive with wonder and curiosity, I ran screaming from the room.

That was almost fifteen years ago. Countless numbers of toys received the breath of life from Gordon. And I was no longer afraid of it. In fact, I had become attached to many of the toys when they had life pulsing through them.

But all toys eventually left the house, filled with a curiosity for the outside world. We never saw them again

Until now, this Christmas Eve.

"What's out there, Sam?" Gordon called from the other room.

Looking out the window in the front door, I saw the snow in the front yard glow from the strange light above our house. It was bright as moonlight, but the sky was dark with cloud cover. Figures as little as mice and some as large as small dogs trudged through the snow. I knew then why the light had mysteriously appeared above our house.

I walked through the living room and went into the study that had become Gordon's new room because he had become too weak to climb the stairs. Six months of this "illness" had left twenty-year-old Gordon thin and his skin paper white. His hair had thinned and lost its luster.