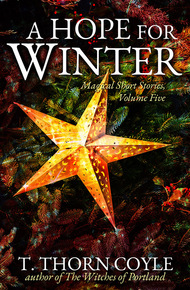 T. Thorn Coyle worked in many strange and diverse occupations before settling in to write novels. Buy them a cup of tea and perhaps they'll tell you about it.

Author of the Seashell Cove Paranormal Mystery series, The Steel Clan Saga, The Witches of Portland, and The Panther Chronicles, Thorn's multiple non-fiction books include Sigil Magic for Writers, Artists & Other Creatives, and Evolutionary Witchcraft.Thorn's work also appears in many anthologies, magazines, and collections.

An interloper to the Pacific Northwest U.S., Thorn pays proper tribute to all the neighborhood cats.

A Hope for Winter by T. Thorn Coyle

The icy cold of a winter's day. The darkness of the longest night. The brightness of lights, reflected in puddles on a city sidewalk.

These five magical stories reach deep into our hopes and rattle the walls of old fears. They open us to the places where magic lives, where we risk our hearts, heal our memories, celebrating the warmth of shared experience, and the promise of the sun.

Come, light a candle in the darkness. Mix some hope with a little dash of love.

The knife of wind sliced through Lucinda's wool coat as she walked up the hill in the gathering dark, body slightly canted toward the sidewalk, pushing against the slope.

More rain scented the air, and dark clouds hovered above, but for now, the day was dry. Bing Crosby sang about sleigh bells, the music piped from expensively kitted out store fronts into a city with no snow. A cable car clanged by. Festooned with golden garlands and a green wreath, it chugged upward past the St. Francis Hotel doormen in their ridiculous Beefeater costumes. Glittering people exited and entered town cars and limousines. Bundled up shoppers thronged the sidewalks. Half a block away, the temporary ice skating rink filled Union Square, lit by a towering Yule tree.

The voice was a quiet puff of breath in the midst of the winter clamor. So soft, Lucinda almost didn't catch it.

Her warm boots paused on the sidewalk, as if of their own accord. She slid an errant dark curl beneath her wool cap and looked down.

The woman's brown eyes shied away from Lucinda's gaze, like a skittish deer. Sitting on a battered milk crate, and swathed in layer upon layer of scarves, hats, coats, and gloves, the woman's age was as indeterminate as Rex's, but for a different reason. Rex was ageless because he was so well cared for, and so long lived.

This woman? She could have been in her mid-forties, like Lucinda, or younger, or in her sixties. Time stole from the poor. Time and hardship.

Lucinda smiled. "Let me see what I can do."

She fished through a leather bag that cost more than this woman probably lived on in a month, and found her wallet. Even though Lucinda almost never used cash, she kept a few bills tucked away, just in case. You never knew when you needed to tip someone, or when you'd encounter a person like this.

Her gloved hand hovered over the green scraps of paper.

Pulled out the fifty.

The eyes between the hat and scarves widened.

"Thank you." The woman's face tilted upward, brown eyes clear. "And a Good Yule to you, as well."

Lucinda blinked. Then nodded. That reply was not what she had been expecting. Most people trotted out a "Merry Christmas" without thinking, no matter what greeting Lucinda offered.

"Well. All right then," Lucinda stammered, a too-bright grin affixed to her face. "I'll be on my way. Keep warm!"

She continued the press upward. Rex was likely wondering what had made her so late. They were meeting in an antiquarian bookshop, so at least he was well occupied.

"Ma'am! Ma'am!" the woman's voice caught in the wind behind.

Lucinda felt a frisson run up her spine. It wasn't from the wind. It wasn't fear. It tasted slightly of the same, uncanny essence that Abraxas carried.

That was it. It was something so old as to be barely recognizable. Older than a human lifespan. Older than a woman, asking for spare change on a milk crate in the middle of the San Francisco Christmas shopping rush.

Frozen on the sidewalk, Lucinda didn't want to turn. Didn't want to face whatever caused the feeling that set the small hairs at the back of her neck on end.

"Excuse me!" A woman shoved passed her, bags and packages colliding with Lucinda's coat. Lucinda hadn't even realized she'd stopped in the middle of the sidewalk, next to a restaurant with bright, steamed-up windows.

The moment was a simple one, yet felt momentous somehow.

"You're being ridiculous," she muttered to herself. "She probably wants to ask you something." Then slowly turned around.

The bundled-up woman had vanished.

But there, something shone on top of the battered milk crate.

Lucinda picked her way back down the hill, that strange feeling building beneath her skin.

On top of the crate was a woven band of red and green wool, strung with nine shining bells, wrapped around a branch of gleaming holly.