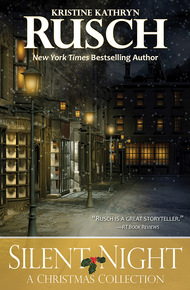 The ten stories all appeared at Christmas time. Kristine Kathryn Rusch, called one of the best short story writers of her generation, has compiled ten of her favorite Christmas stories into one volume. These stories run through a variety of genres from fantasy ("Nutball Season," "Doubting Thomas," "Substitutions") to mainstream ("Stille Nacht") to science fiction ("Boz," "Loop," and "A Taste of Miracles" to mystery ("Rehabilitation," "Snow Angels," "The Moorhead House"). Some dark, some funny—all touch upon the holidays in one way or another.

When I met Dean Wesley Smith, the man who would become my husband, neither of us had any money. It was 1986 and we were both struggling writers. I was a working nonfiction writer, and Dean had published quite a few short stories. He made his money as a bartender. I gave up nonfiction to try my hand at fiction and got a part-time job as the world's worst secretary. (The ad didn't ask for the world's worst secretary; I just ended up with the title.)

As the holiday season approached, we tried to figure out how to be festive while broke. We had a lot of writer friends who also had no money, except for the handful who had Real Jobs. So we wanted an equitable division of presents. We didn't want one person to spend five times the funds that someone else did, even if the first person could afford it. We both knew from personal experience that such differences in gift giving felt awkward at best.

The first Christmas we didn't give any gifts. But the next year, we figured out what we wanted. We wanted a festive, writerly Christmas. So we invited a group of our writer friends. We had turkey and pie and cookies and all kinds of yummy treats. We had to buy gifts for everyone who came but—and here was the catch—we couldn't spend more than one dollar per person.

And then, when the feasting and the gift giving ended, we sat around the fire (or a makeshift fire, if no one had a fireplace) and read Christmas ghost stories to each other, ghost stories we had written.

Some years, the stories were horribly gruesome. Some years, the stories were amazingly sweet. One year, Kevin J. Anderson wrote a tremendous Christmas story about Charles Dickens (which he later sold), but the room was so hot as he read that Dean fell asleep. And snored. Kevin, being Kevin, read blithely on, while various people around the room tried (and failed) to wake Dean up.

Eventually, people got married and developed their own family Christmases. Dean and I moved to the Oregon Coast, so the drive back to Eugene, Oregon (where the festivities were held) was simply too burdensome to do in one day. (We made that decision after driving back in freezing fog one Christmas Eve—and we were the only people on the road.)

The holiday tradition continues in Eugene, but Dean and I are no longer part of it. We have our own tradition with our friends here on the Coast, writers and non-writers. We no longer read Christmas ghost stories to each other. But every year, I try to write a Christmas story anyway.

Four of the stories in this volume were written for those Christmas Eve ceremonies, although not a one of them has a proper ghost. "Loop" is a science fiction story in which a woman appears ghostly. And "Stille Nacht" is haunted by the ghost of my mother, who was dying as I wrote the story.

The others were written because I got into the habit of writing something Christmasy for the holiday season. Sometimes the stories only have a whisper of Christmas about them. Sometimes they're just set at Christmas time. Some are sweet and saccharine. Some are bloody and violent. I guess, for me, the season can encompass all of those things.

I don't have quite enough stories to do a big Christmas collection every year, but I'll do one whenever I have at least ten stories to share. So this is the first: The Christmas 2010 collection. You'll find something to fit your mood here, no matter what your mood may be.

Enjoy the collection, and enjoy the season. I do find it magical and I hope you do as well.