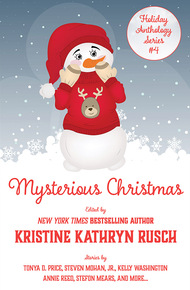 Murder, mayhem, and all manner of crimes set during the holiday season give this anthology a bite that serves as a delightful change from the sweetness that often dominates this time of the year.

This volume contains an abundance of thieves, a few murderers, a wannabe murderer, and one or two stories in which the crime lurks on the periphery. With a host of unreliable narrators, a few psychopaths, and one acrobat, who could resist?

From a search for the perfect Christmas tree that turns deadly to a reformed thief who wrestles with the better angels of his nature when temptation arises during the holidays, these marvelous mysteries prove the perfect distraction for even the stormiest winter evening.

Includes:
"Christmas Chase" by Tonya D. Price
"For The Win" by Stephannie Tallent
"Into the Good Night" by Rob Vagle
"A Different, Better Red" by Michael Warren Lucas
"The Art of Waiting" by Kelly Washington
"Christmas in the Ruins" by Mary Jo Rabe
"The Magi of St. Michael's" by Annie Reed
"Pungent Justice" by Kari Kilgore
"Targets of Opportunity" by Stefon Mears
"All The Bells and Whistles" by B.A. Paul
"Not A Cozy" by Steven Mohan, Jr.

When I asked some of the best writers I know to write for this anthology, I didn't realize I had given them a tough task. For some reason, writers hear the word "mysterious" and they think Agatha Christie and the Golden Age puzzle mystery, also known as the cozy.

I loathe cozies. I really do. I don't like the idea of a crime being minimized into something that becomes an intellectual game, which often results in making light of the crime. Perhaps this is because I am a crime victim myself (multiple times, I'm afraid), and because I worked for a forensic psychologist, where I saw the ravages of crime firsthand.

Being the victim of a crime has an impact on your entire life. It changes the trajectory of your life. One moment you're going forward, and the next you're on a road you don't even recognize.

And then there are all the fraught issues of dealing with authority, which has become a theme in 2020. Criminals, crime victims, the police, the lawyers, and everyone else in the justice system…well, they're not stereotypes or tropes.

Okay. I'll climb off my soapbox now. Writers who've worked with me have heard this lecture, even more in depth.

But here's the thing: Sometimes I like Christmas cozies. Even I'm at a loss to explain that. Mostly, I like what's known of as a soft-boiled mystery, one that is gentle and treats things seriously (in my opinion) but doesn't get into the blood and guts of the hard-boiled crime story.

I knew with the word "mysterious" in the title I would get a lot of gentle and the occasional cozy. So I tried to waylay that.

Here's what I told the writers when I asked them to submit to this anthology:

Murder, mayhem, and all manner of crimes set around the Christmas holiday season. I am not a big fan of cozies, so if you write one, realize it'll be a harder sell than a crime story. I do like romantic mysteries, though, so if you combine mystery, romance, and the holidays (with a happily ever after), then I'll be happy. I want only contemporary or historical mysteries. No fantasy or sf, please.

Because I limited the anthology, I got fewer cozies than expected, but I still got too many. And I didn't buy a one. (I'm relatively consistent that way.)

I did get a lot of crime stories that were not about murder, which pleases me. Mostly, thieves propagate this anthology. We have a few murderers, a wannabe murderer, and one or two stories in which the crime is peripheral to the story. We have unreliable narrators, a few psychopaths, and one acrobat.

Yeah, I know. An acrobat. In a story that's titled "Not a Cozy," which I saved for last. You'll understand when you get there. After reading this introduction, you'll also understand that the story was probably written with me in mind. Go figure.

For the most part, though, I don't think there's anything in here that will scare away the easily frightened or the squeamish. This is a relatively gentle mystery anthology…at least one edited by me.

So gather your loved ones around you, keep a wary eye on your presents and purchases, avoid mall Santas, and settle in for a long winter's read.