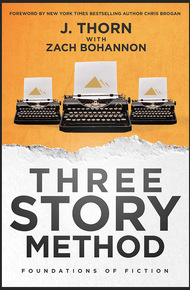 J. Thorn has published two million words and has sold more than 185,000 books worldwide. He is an official member of the Science Fiction and Fantasy Writers of America, the Horror Writers Association, and the Great Lakes Association of Horror Writers.

Thorn earned a B.A. in American History from the University of Pittsburgh and a M.A. from Duquesne University. He is a full-time writer, part-time professor at John Carroll University, co-owner of Molten Universe Media, podcaster, FM radio DJ, musician, and a certified Story Grid nerd.

Storytelling isn't complicated. We'll prove it to you.

Do you have an amazing idea for a novel but you struggle to get words on the page? Maybe the problem isn't writer's block. Maybe you need a writing process.

Publishing veterans and bestselling authors Zach Bohannon and J. Thorn share their proven system for developing a plan that will bridge the gap between a collection of random notes and a cohesive first draft.

This comprehensive book will teach you the foundations of fiction: Plot, Structure, Genre, Theme, Character, and World.

Developed over 10 years and applied on millions of words of fiction, Thorn and Bohannon will show you how to layer your approach and build a fantastic story from the ground up.

No more staring at a blinking cursor when you sit down to write!

Become a master storyteller today. Three Story Method will transform you from a struggling writer into a career author.

Downloadable worksheet and full list of resources included! Get it now!

Check out the workbook, value-priced so you can use a new one for each project. Search "Three Story Method Workbook" on Amazon and get the workbook companion today!

The introduction of Three Story Method poses the great question that all fiction writers ask themselves at some point in their careers: "How do you turn an idea into a novel?" The authors are forthright when they state that there is no magic formula; however, the solution provided is far superior. Three Story Method is a process for creative development based on the most effective storytelling methodologies in history going back to the principles of Aristotle. J. Thorn holds is a full-time author, a part-time professor at John Carroll University, a co-owner of Molten Universe Media, as well as a podcaster, FM radio DJ, and musician. Co-author Zach Bohannon writes post-apocalyptic sci-fi, horror, and fantasy fiction. He is a co-owner of Molten Universe Media, a hockey fan, a drummer, and an avid gamer. – Melissa Snark

"How do you turn an idea into a novel?"

It sounds simple enough. You have a great idea. You sit down at the computer. Type. Sell your book to an agent, and ultimately, to a publishing house, or self-publish it. Royalties roll in. But it doesn't work like that. In fact, most brilliant ideas die somewhere between inception and the creation of that blank document titled, "Chapter 1."

When I asked Seth Godin how he decides on which project to begin, he told me, "I don't have a method. I simply know that I must choose. Most people don't embrace that." Pure Seth. Once you've embraced that reality, how do you move forward?

Systems work. Even for creatives. I came to that realization when I started writing in 2009, continuing to develop a system with Zach Bohannon since 2015, because you can't collaborate without a system. A lone artist can sit down at a computer and tell a story in whatever manner she wants, something you can't do when co-writing. But we quickly discovered that our system wasn't just for collaborating. It made our individual writing process more efficient, but more importantly, it made our stories better.

I knew from my days in the classroom that creativity is most vibrant when it has boundaries. We hate deadlines, but the quality of our stories would suffer without them—we know this even though we don't like to admit it.

But those boundaries don't need to be restrictive or formulaic. Three Story Method is a process, not a formula. It's been developed by using the best story methodologies ever created, and you'll hear from some of those creators throughout the book.

Once we started refining our process, we knew others just like us would benefit from it.

I'm excited to share what I've learned with you, but before we get into the methodology, let's cover a few basics about this book and how it was written.

You'll notice that there are two author names on the cover and yet, I'm speaking to you in the first person as J. Thorn.

Zach Bohannon has been my co-writer and business partner for years. We've written and published hundreds of thousands of words together, and our process has remained generally the same—he does the first drafting, and I do the revisions. But we knew right from the beginning that Three Story Method would have to be different.

I started my publishing journey in 2009 and have also spent the past 25 years as an educator. I've taught kindergartners how to read and graduate students how to write. Also, I attended an intense training to become a certified Story Grid editor in 2017 and have been working with clients ever since. I'm a student of Story, having read dozens of books, and consuming countless classes on the craft.

Zach started on his path in 2014, and he came from the corporate side. He doesn't have the same educator experience or training as me, and we concluded (at the same time, although separately) that I needed to be the one to write the first few drafts of this book.

But make no mistake. Three Story Method is our process. We've developed it together over the past several years, having published over a dozen novels we've co-written, and it's what we use with our authors in our publishing company, Molten Universe Media.

Rather than trying to write in a plural first person ("we"), the decision was made to write this book in my voice with Zach's help in revisions. I wrote the first draft and then went through several revisions before sharing it with Zach, who helped to refine all aspects of it.

We believe Three Story Method can help all authors, fiction and nonfiction alike. But in case you're reading the sample and trying to decide whether or not this book is for you, it's worth debunking a few common misconceptions.

"But I don't write fiction."

Although the majority of the foundation work of Three Story Method has been done for creating fiction, it works for nonfiction as well. The most effective sales copy and persuasive writing does so through Story and therefore, knowing how to build to a draft will make all of your storytelling better, from sales copy, to email blasts, to narrative nonfiction. Even in the corporate and small business world, modern branding is all about storytelling.

We're all plotters. We're all pantsers. This is a false dichotomy that has been the source of many heated debates between writers. As you'll see in the next section, I believe that some level of planning is the best approach, although that doesn't mean you must plot out every single moment of your novel before you begin drafting.

"I don't follow formulas. I'm a creative, an artist."

Another major misconception that exists in the author community is that a process and a formula are the same thing. They are not. A formula is like a recipe. You do this, you get that. A process is a method, a workflow, or a way of doing something. You already have a process even if you think you don't. If you always sit down at a blank page and stare at it until words come into your head, that's a process—not a productive one, but it's a process, nonetheless.

Three Story Method is designed to be flexible, allowing you to go as deep or as shallow as necessary. For example, if you're a discovery writer, you could still write 85% of your novel without beats or an outline. And if you're a plotter, you might only need 50 words to create a story beat for a chapter of 2,000 words, which means that you're "pantsing" 99% of the words written for that chapter.

You can still be creative with Three Story Method because you already have a process. We're here to help you make it better.

"I've read all the books on Story. There's nothing more to learn."

Imagine if Joseph Campbell had believed that? Or Christopher Vogler? Or Kim Hudson? Or Robert McKee? Or Shawn Coyne?

What if Mark Zuckerberg had believed that MySpace was already the established social media of choice?

What if Chipotle had decided that the fast-food marketplace was too saturated for yet another chain?

There have been methodology books before Three Story Method, and there will be more that come after. I've read dozens and continue to read them because each author brings something new. I'm a student of Story. I believe that mastering the craft is a lifelong pursuit and anyone who tells you they have it all figured out is not being honest.

To be the best writer you can be, you must constantly be improving, learning. Three Story Method isn't the best or definitive storytelling methodology, but it's one that we've proven works, over and over again.

One quick grammatical note: You'll notice that the word "Story" is capitalized throughout this book because I hold it in such reverence. Story deserves that capital "S" even when it doesn't start a sentence.