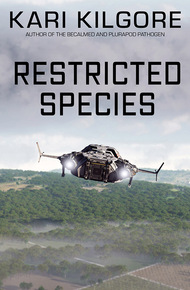 When the Worst Thing Goes Wrong

Pollinator drones never sting or bite. They simply do their jobs.

Then crops all over Mossera 4 begin to fail.

Will Jim discover the cause before starvation, or worse, turns his dream life into a nightmare?

A Dispatches from the Galaxy Novella

Jim Turhan couldn't quite remember why he'd started his nighttime habit of strolling around his cadet training lab on Mossera 4. He rarely saw another living creature, human or otherwise. No one wandering through empty xeno-botany classrooms or huddled in front of a holo-comm, homesick and lonely. Even when he looped outside into the crop supply planet's dim twilight, Jim was alone.

Jim had no doubt the rotating groups of ConSpace recruits got homesick all the time. Most were so young, humans still in their teens, aliens in the same awkward, confusing life stage. None of them were from the neighborhood or within a month's travel. Even with great clusters of stars close enough to leach darkness from the night sky, the Mossera System was as far from habitable worlds as you could get without a few years of hyper-sleep.

The structure and schedule for first year cadets at the Mosslea Academy focused on one thing. Keep them just overwhelmed and exhausted enough that they won't have time or energy to get into trouble. Sure, they'd retain a good bit of what they learned in their weary brain cells, and they'd make lifelong friends along the way. Those were side benefits.

Keeping them out of mischief until they grew some common sense was the only way to end up with graduates rather than washouts. Or worse.

Passing the outermost rows of octo-triticale, Jim brushed his hand across the waist high plants, faintly brown and green in the twilight. Wispy tassels and spiky rows of seeds tickled his palm and wrist. The nutrient-packed wheat seemed to thrive no matter where humanity scattered their seeds, even on a planet with no native pollinators or any other kind of insect.

Jim was mostly glad they only had the pollinator drones he specialized in, ranging from barely visible midge-bots to metallic hummingbirds. He'd read about the biting, stinging kind that died out on Earth before he was born.

Mossera 4 had no life forms that weren't firmly rooted in the ground. And everything turning this formerly wet but lifeless hunk of rock into a lush farmworld came from somewhere else.

He followed the faintly glowing plas-rock path that crunched under his feet, back toward the academy's domes powered down to essential lighting and systems. Jim could easily make out the rounded roofs of greenhouses and square classrooms. A breeze funneled between buildings carried the scent of rosemary bushes after the day's rainstorm. He hardly ever worked in the herb sector, but Jim never grew tired of those surprise bursts of aroma.

Mosslea wasn't a lively entertainment region, not like Mosserrania, the leisure continent around the warm equatorial zone of Mossera 4. ConSpace usually did their best to pair up supply and leisure when they sent miners into less than hospitable conditions.

Mossera 5, the ore- and energy-rich planet every operation on 4 supported, fit that definition better than most. Well below freezing, almost non-existent atmosphere, no water to speak of.

Jim had never set foot on the arid, treacherous orange and black surface, much less beneath in the kilometers of mines. He had no desire to change that. All he needed to know about 5 was ConSpace needed those resources enough to dedicate an entire planet to supporting those miners.

A faint, bluish light inside the pollinator drone lab pulled Jim out of his visions of the hellish landscape barely two hundred million kilometers away. Every light system in the lab complex powered down automatically for evening, powering up only if someone triggered it.

Only one other resident would possibly be wandering around so late into sleep hours. And working, at that.

Sure enough, a head full of spiky blond hair was visible in the drone assembly and maintenance section. Rob Martinez leaned over one of the oval tables adjusted as high as it would go, elbows sunk into the pale blue moss surface just like when he was a raw cadet more than ten years ago. He'd finally grown into his lanky arms and legs, and into his quick and sometimes troublesome mind, turning into the natural xeno-farmer Jim suspected he'd be.

Not that it wasn't a near thing for a while there. Rob's struggle to believe in himself had been long and painful to watch.

"You authorized to be in here alone, kid?" Jim said, smiling when Rob's head popped up.

"Someone's gotta keep the place organized. The old man in charge keeps wandering off in the middle of the night."

Jim snorted as he joined Rob at the table. Seemed silly to call a man in his early thirties a kid. Looking back from pushing eighty himself made just about everyone seem like a kid. Lifespans and medical advances, not to mention living several decades on such a pure, clean planet meant he likely had a good forty years ahead of him.

The kilometers added up though, especially from when he was younger than Rob.

"Night's the only time I can get some peace and quiet around this place." Jim glanced at the drifts and piles of disassembled drones covering the flat blue surface. Moth, fly, maybe a honeybee or two. "Did the cadets break more than their usual quota today?"

"No more than usual, no. I doubt any of them could come close to my personal record." Rob ran his hands through already messy hair, a habit from his challenging cadet years. "Wish it was something that easy to deal with."

Jim brushed the surface of the moss, smoothing some of the divots his former troublesome student still made. The moss not only helped keep the air clean and smelling more like a hardwood forest after the rain instead of nervous sweat. All the pollination drones, from nearly invisible midges up to dive bomb hummingbirds, were programed to land there in case they got away.

They always got away from new cadets. Every single time.

Rob picked up an empty pollen sack from one of the mechanical honeybees. The rice grain-sized pouches were soft transparent poly-plas. Or at least they should have been transparent. Some careless cadet, combined with careless supervision, had left these dusted with yellowish powder.

"These were last used a few days ago." Rob held the sack up toward the overhead grow-lights. The rubbery black wrist-mag he wore created the static field he needed for a good grip. "Put away a mess, as you can see."

"I know you're not out here late at night cleaning up after a bunch of sloppy cadets."

"Nope. I checked out the summer squash vines this afternoon. The ones we got a few years ago from old Earth stock? The plants look great, growing like wildfire. And not one blossom is setting fruit."

Jim scowled. "That can't be right. We ran those drones…well, a few days ago, just like you said. I watched your sloppy cadets load up the pollen myself."

"Same way you watched me load it up way back when, I know. I took the cadets out that day to see the drones in action since the squash blossoms are so big. Everything seemed normal. No heavy wind, no rain until yesterday."

"From the looks of these pollen sacks," Jim said, "they used up most of it out there. Even if they didn't bother to clean up." He picked up several of the sacks and shook them in his palm. The rattling motion rewarded him with a fine coating of yellow dust. "Anything strange about this batch?"

Rob straightened to his full height, several hands taller than Jim, stretching his arms above his head.

"Not that I can see. We collected it last season from the male blossoms. Standard procedure with a new strain."

Jim shivered, remembering his grandparents' tales of failed crops back on Earth. How they thought it was isolated at first, but the problem continued and spread. How waves of shortages and starvation led to conflicts that lasted long enough to catch Jim up in their final gasps of violence. Rapid colonization, and ConSpace developing the drones scattered in front of him, turned humanity's descent into triumph.

"We need to check the other crops," Jim said, dropping the cleaner pollen sacks and rubbing his palms on the table moss. "Have we sent any of this pollen out to other xeno-farms?"

"Not yet. We hadn't established our own supplies enough. This strain has grown true on at least a hundred other planets and moons. Think it could be a local problem? Soil or water, maybe?"

"That or some kind of problem we haven't seen before. Much as we screen out cadets from disease-prone planets and sterilize everything, we know something could get through. Got enough to keep the kids busy tomorrow?"

Rob grinned. "Already got it planned. Every single drone gets broken down and cleaned. Perfect opportunity to explain how problems spread without letting anyone know what's going on. And to watch the cadets who left this mess do it the right way."

"They won't soon forget you looming over their shoulders. Glad to help if you need it. It's been a while since I got to intimidate a bunch of lazy kids." Jim helped Rob sort the drones back into their proper bins. "Good call on keeping this quiet, too. If this is a simple fix, we don't want ConSpace breathing down our necks or causing a panic for no good reason."

"If it's not, we'll have done everything we can on this end." Rob clapped Jim on the shoulder. "Let's get them started cleaning first thing, then we'll check the rest of the new crops. Get some sleep, old man. Long day ahead."