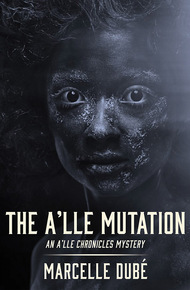 The A'lle Mutation by Marcelle Dube

In the early 1700s, an A'lle generation ship crashed in the woods of Lower Canada. Survivors stumbled out of the wreckage to find French settlers working the land. While many of the colonists sheltered the injured A'lle, some reacted with fear and loathing. Two centuries later, nothing much has changed.

Two months after the events in Backli's Ford, Constance A'lle, first A'lle investigator for Lower Canada, and Chief Investigator Desautel still haven't identified the cabal responsible for the kidnapping and murder of so many A'lle.

While they pursue their investigation in Montreal, Constance is sidetracked by family and the threat of an epidemic—an epidemic for which the immune A'lle might be responsible, intensifying the already simmering human resentment against the A'lle.

With A'lle and human hostility spiking, Constance and Desautel must navigate the increasingly brittle peace to find the head of the cabal threatening the A'lle in Lower Canada and keep their own fragile trust from shattering.

Set in 1912, The A'lle Mutation follows Constance A'lle and Chief Investigator Desautel as they navigate the fraught relationship between humans and A'lle while trying to find those responsible for the deaths of so many A'lle.

They were in the small morgue in the Hôpital Dieu. The doctor had a private practice on Ste. Catherine but was also one of six Montreal doctors on retainer for the constabulary. Something twisted in Desautel's gut. The doctors had been exceptionally busy of late.

He risked a glance at the body. It was covered up to the neck by a stained sheet. The face was bloated, unrecognizable as male or female.

"I can't tell you when she died," said Dr. Pronovost before Desautel could ask. "She's been in the water too long."

And with the ice finally out of the river, the water was only now releasing its dubious gifts accrued during the winter. Spring was always welcome in Lower Canada, but it brought with it the terrible odors of the thawing outhouses and heaps of household garbage that had accumulated over the winter. And it was the time the river gave up its dead.

"Was anything taken?" he asked softly.

Docteur Pronovost had pale hair and a pale complexion, with freckles making him look younger than his forty-two years. Only the deep groove between his eyebrows hinted at his true age. He was short, with broad shoulders and big hands. Now he looked up at Desautel, a troubled look in his eyes.

"Her womb," he said softly. "Her heart. Her endocrinal glands, or what I think are her endocrinal glands." He sighed with frustration. "We know remarkably little about the A'lle physiology," he said. "Or at least, I know little. I know some other organs are also missing, and I think they correspond to the human liver and gall bladder, but I can't be sure."

Desautel took a deep breath and immediately regretted it.

The doctor shook his head. "We will have to rely on the constabulary for identification," he said grimly. "And there are no scars or other identifying marks."

He left the morgue and its unpleasant smells behind, walking down the gloomy passageway toward the loading dock at the far end. He knew the list of missing A'lle as well as Constance did, and there was only one woman who might fit this woman's description.