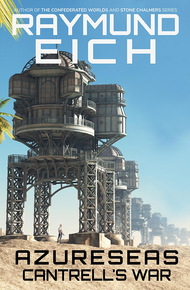 Raymund Eich is an author of science fiction and fantasy whose Middle American upbringing is a launchpad for journeys to the ends of the universe.

His short fiction has appeared in Analog and the anthology Surviving Tomorrow. His twenty book-length works include The False Flag War space opera series, military science fiction series The Confederated Worlds, and the Stone Chalmers series of science fiction espionage adventures, along with standalone novels, short novels, and story collections. In addition to writing, he earned a Ph.D. in biochemistry, works as a patent agent, and lives in Houston with his family.

Ross Cantrell joined the animal control mission on the newly-discovered planet Azureseas to earn the money to start married life together with his girlfriend.

Then Ross discovers the truth about the planet's "animals."

Ross Cantrell stood with the ocean before him and the cluster of huts on the beach behind him. He didn't look back.

The boxy deployment boat squatted in waist-high water twenty meters out. He could see a slice of the men at the front corner turrets through the machine gun slits. The ocean was so clear and the orange-yellow sun so bright he could see beach sand heaped up where the front end had pushed in.

Prow. The word sneaked into the top of his mind like an infiltrator passing barbed wire and sensor drones. The front end of a seagoing boat was called the prow.

He shook his head, like a cow back home twitching its tail to shake off a fly. No need for fancy words.

The line of human soldiers splashed into water warm as a bathtub and the shade of blue that gave the planet the name Azureseas. For a reason he couldn't fathom, Cantrell sounded it out in his mind. A-zhoor-sees. To avoid any discharge of the boat's reactive armor, they followed a looping path to the boat's open ramp at the back. Cantrell sucked protein goo from the straw inside his helmet and trudged along. He got deeper and the water seemed to make his legs heavier inside the boots and the shin plates of his battle armor. Little blue crawly things burrowed away from his feet.

He tried not to step on them. They didn't threaten people so why not leave them alone?

He didn't look back at the cluster of huts. He didn't need to. From behind came the smells of fire and smoke. Just like being around the burn pile in a field just cleared of brush back home. There was another smell, like roasted meat, but different. Something fruity in its smell too, like a banana or that yellow thing like a banana his buddy Armando talked about from his homeworld. Plant- something?

This time, the defenses in Cantrell's brain kept the word from reaching him.

Whatever the word was, funny how a creature looking like a cross between a dinosaur and a six-legged chicken could smell like both meat and a piece of fruit.

Cantrell shrugged shoulders bearing his slung rifle and thirty-kilo pack. His platoon had been given its orders. The creatures in the village—

He blacked out for a second or two. His legs carried on without him, brought him another sloshy step toward the extraction boat. Fear followed for a moment, but just a moment. The civilian contractors at the island base told them blackouts were normal, a side effect of hypno training and the trauma care nanobots deployed in their bloodstreams. Nothing permanent. They'd go away after their tour of duty on Azureseas.

The creatures were a threat to human visitors to this planet. He'd been told that but couldn't remember where. They'd built the cluster of huts from palm-like fronds and bark by instinct. Like beavers and dams. Burning the huts and killing the creatures was pest control. Just like plinking tree cats threatening the chicken coop, back home.

And he'd get the same hug and kiss from Nanette when he got back.

And maybe this time, as a man and a soldier, she might give him a little more.

But he wasn't home yet. He trudged on through the water. The boat's engines idled. The gunner at the front right corner kept his medium machine gun trained on the beach but turned most of his attention to the line of soldiers. A thumbs-up. Over the radio, he said, "Good hunting?"

In front of Cantrell, Armando laughed. Ravi said all boastful, "No, more like neo—!"

An explosion on the shore. The gunner jerked his head up. All the soldiers in the water twisted around. Cantrell's rifle ended up in his hands without him noticing how.

No creature stirred on the low dunes fifty meters behind the beach. Flames still devoured what was left of the rounded huts. Now, where the biggest hut had stood in the middle of the cluster lay a hole clouded by a lot of white smoke. Little pieces of leaves and bark floated in the hot air of the fires. The smoke spread quickly, like a fog. It hid the sensor drones watching the perimeter. It reached over the beach and the shallow water.

Cantrell sniffed with his mouth open. His helmet allowed some of the smoky air in so the air must be free of toxins.

He remembered his dad grilling hamburgers over charred wood. And for a moment he thought his suit's waste management system leaked, because he picked up the smells of rotten eggs and pee.

He relaxed. Amazing the six-legged dinosaur chickens could combine saltpeter, charcoal, and sulfur in the right proportions, by inst—

Another blackout. He couldn't tell how long, but short enough that nobody in line moved.

A voice as young as any soldier's spoke over the platoon's radio net. Lieutenant Liebrandt. "Sensors pick up evidence of an accidental explosion… of…. Proceed with remount."

The soldiers swung back to face the boat. Not in unison, because they weren't robots, they were free men. Cantrell turned only when the man in front of him took his next step toward the boat.

As he turned, a little piece of something drifted down, no longer held up by the cooler air near the boat. An air current made it hover for a moment about half a meter in front of his face.

Cantrell reached up and grabbed it and took a step toward the boat, all in one motion.

He glanced at the thing in his palm.

A piece of bark. Dried and crinkly. Blackened edges where it had burned a little. Markings on it a darker shade of the yellow of the berries growing on their island base that gave men diarrhea if they broke standing orders and ate them.

He looked closer. The stroke of the markings reminded him of fingerpaintings made by his baby brother in kindergarten. But what was—

Cantrell saw it. The head and upper body of a dinosaur chicken. One front paw raised. Crude lines but he could see it. Wise eyes, like an old dog wanting to herd with its master once more. Face upturned. Long and pointy ears perked. It reached up for something. Not toward a thing. Toward….

But he only held a picture of an animal. A picture made by instinct by another animal.

Even after the next blackout ended, his thoughts stayed fuzzy. Getting too hot in his suit? He sipped water through the straw and told his battlesuit to run a self-check on its climate control system.

Despite the blackout, his grip held tight on the piece of dried bark.