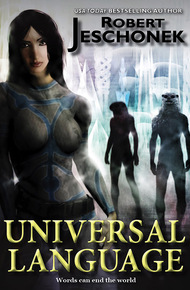 One mistake by space linguist Jalila could cost an alien species their lives. The crew of the starship Ibn Battuta has 24 hours to prepare the people of planet Vox to face an approaching invasion fleet. But when Jalila mistakenly uses a forbidden slur, the Vox locals attack their supposed saviors. Drawn into a violent revolution, a "war of words" to decide language dominance, Jalila must rely on other resources when deprived of communication technology and even the power of speech. As revolution and invasion collide, only Jalila can save her shipmates and the planet Vox by revealing the secret behind the slur that started it all, the dark secret linking Vox and invaders in an ancient cycle of slavery, suffering, lies, and death.

When Nalo the Vox led the away team from the Ibn Battuta into one of the soaring towers, Xeno-Linguist Jalila bint Farooq bin Abdul Al-Fulani gazed upward...and realized that her view was unobstructed by even the tinted, transparent walls and ceilings that honeycombed other buildings. She could see all the way from ground level to the distant pinnacle, seemingly a mile above. It was all one vast cathedral, walled in light and color, lined with a ring of slender, glassy pillars that corkscrewed into the heavenly heights.

As Jalila peered up into the otherworldly steeple, she half expected to see a host of angels drift downward, so she was startled when she noticed faraway figures descending from the upper reaches. At first, they were so distant that they were little more than specks, but even then, Jalila could see that they were acrobatically inclined. The five figures moved fast, zipping down the slender pillars, leaping from one pillar to another at high altitudes with perfect ease and grace.

As the figures drew closer, she realized they were Vox, and they were climbing down headfirst, like squirrels descending tree trunks. They scurried downward fearlessly, skinny bodies twisting around the corkscrew pillars, making heart-stopping dives from pole to pole with no more visible effort than kids playing on monkey bars.

Jalila's shipmates craned their necks to watch the spectacle. Major al-Aziz whistled softly in amazement. Stern Colonel Farouk said nothing, which was no surprise, but there wasn't a peep out of Nalo or the mob who had followed them into the tower, either. If even the chatterbox locals maintained a respectful silence here, Jalila supposed the team was indeed in the presence of some kind of leadership.

Leaping and zipping down the pillars, the five acrobatic Vox closed the distance from the pinnacle in a twinkling. As they approached, Jalila could make out differences in their coloration: two had black fur, one silver, one gold, and one red. Like all Vox, they wore no clothing, though their fur coats were daubed with colorful designs on the scalp, back, and belly—circles, spirals, triangles, and starbursts in white and green and pink and black, whatever color showed up best on their coats.

The five Vox dropped further, then stopped a few yards overhead. They twined themselves around the pillars and hung there, peering down at the visitors with gleaming opal eyes.

Jalila was so dazzled by the wonders she had been witnessing, it took a moment for her to remember she had a job to do. When al-Aziz cleared his throat, she snapped back to reality and activated the Voicebox.

"Jalila," said al-Aziz. "Ask our friend here," and he indicated the brown-furred guide, "if these are the leaders of the Vox."

Touching keys, Jalila found the words she was looking for, then turned to Nalo and repeated the question in his language. Whiskers twitching, the brown-furred

otter-like being answered, speaking slowly and without clicks and smacks for her benefit.

Jalila watched the translation on her device, though she had picked up enough of the language to get the gist of what he had said. "Nalo says they are planetary ministers, and the red one is Regent Ieria. You should speak to her."

"Anything else I should know?" al-Aziz combed his fingers through his thick brown hair and looked up at the red-furred Vox wrapped around one of the pillars.

"Use her title when addressing her," said Jalila. "Don't talk with your hands. I'll take care of the rest."

al-Aziz nodded and stepped forward, turning his attention to the regent. Jalila posted herself alongside him, raising the Voicebox so its pickups could best catch the words of the Vox leader.

Clasping his hands behind him, al-Aziz spoke to the red-furred Vox. "Regent. I am Major al-Aziz of the starcraft Ibn Battuta."

Jalila read the translation from the Voicebox's display, taking care to speak loudly and clearly enough for the leaders to hear and understand. Though the Voicebox could have broadcast the audio itself, Jalila felt more comfortable doing the talking in this delicate situation. She was paranoid about making a mistake like on Pyrrhus VII and didn't want to rely too much on anyone or anything but herself.

al-Aziz nodded at Jalila. "This is my translator, Corporal Jalila Al-Fulani."

Jalila told Regent Ieria what al-Aziz had said, then smiled and bowed.

The red-furred Vox stared down at them, blinking her black pearl eyes...then fired off a storm of syllables, clicks, smacks, and gestures that baffled Jalila and the Voicebox alike.

Fortunately, Nalo came to the rescue. Appearing at Jalila's side, he let loose a sequence of chatter, noises, and hand signs of his own, directed at Ieria. It must have been an explanation of Jalila's conversational limitations, for when Ieria spoke again, it was without gestures or non-pulmonic sounds. The Voicebox resumed normal function, displaying its conversion of the leader's speech.

"Welcome," Jalila read from the screen to al-Aziz. "What brings you to Vox?"

al-Aziz considered his next words carefully. "A fleet of vessels is headed toward your world. Many ships, heavily armed."

"No," said al-Aziz. "We don't know who they are...but we know they are hostile. They disabled our own ship, the Ibn Battuta, and left it for dead."

Jalila translated. She was startled when the gold-furred Vox minister flung himself onto Ieria's pillar, interjecting his own streak of chatter. Apparently, the minister had caught on to the need for conversational simplicity, for his speech, though quick-fire, was free of extraneous sounds.

"The other Vox called you a liar," translated Jalila. "He says this is a distraction to hide your own dishonest intentions."

"Our only intention is to warn you," said al-Aziz. "We can provide you with the coordinates of the invasion fleet, and all the data we have on it." Casting his green eyes upward, he gazed into the dazzling heights of the tower. "Your world is filled with beauty. We will do everything in our power to help you preserve it."

For an instant, there was silence as the regent, ministers, and onlookers absorbed what she had said. Then, all at once, the assembled Vox erupted into chaos.

The outcry was deafening. All around Jalila, Vox were chattering, clicking, smacking, whistling, screaming. They gestured wildly, signing so fast and emphatically that their hands were blurs. Even Ieria and her fellow leaders howled and flailed, diving from pillar to pillar in a frenzy.

The uproar swelled and cascaded in the vast chamber, echo building upon echo with growing force. There must have been at least a hundred Vox in the tower, and every single one of them cried out at once.

For some reason, her eyes fell to the Voicebox in her hands. Somehow, amid the tumult, it must have miraculously tuned in one voice among many, or many voices saying the same thing. Or maybe it was a malfunction.

One word flashed on the display, again and again.