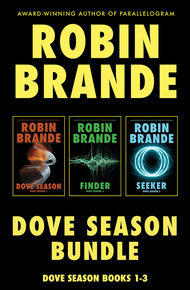 Robin Brande is an award-winning author, lawyer, black belt in martial arts, and wilderness medic. Her outdoor adventures range from the Rocky Mountains to the Alps to Iceland. She writes a wide variety of fiction, from fantasy to science fiction to young adult, romance, and mystery. Because everything is interesting. All the time.

Before turning to science fiction and fantasy, her science-focused young adult novels won numerous state and library awards and were named Best Fiction for Young Adults by the American Library Association. She was the Judy Goddard/Libraries Ltd. Arizona Young Adult Author of the year. Her debut novel Evolution, Me & Other Freaks of Nature was included on the prestigious Amelia Bloomer List of the ALA Feminist Task Force and received a citation from the Notable Children's Trade Books in the Field of Social Studies from the National Council of Social Studies/Children's Book Council.

The truth is already here, for those who are brave enough to find it.

Meet the heroes of Dove Season, from those with mysterious gifts to the UFO investigators, scientists, and government agents trying to solve the mysteries of the universe. This science fiction and fantasy action adventure series will take you on an unforgettable journey—both here on our home planet, and to the galaxies beyond.

What happened in New Hampshire last fall changed what they all thought they knew.

These visitations weren't one-offs after all. Not necessarily. A husband and wife, the Fullers, were driving home from a party one night on the isolated dirt road that led back to their farm, when suddenly their truck lifted off of the road.

Just rose into the air several feet. Not because it went over a bump or for any other natural reason. The couple had driven that same road a hundred times, and it was always as straight and solid as the Fullers themselves. But now they were suspended in the air, lifted by some unseen force. Mrs. Fuller screamed. Mr. Fuller might have, too.

The truck floated forward about a quarter of a mile, then bounced back down to the road. Mr. Fuller pressed his foot hard against the gas, trying to outrun whatever just happened, but then the truck floated up again and the two of them clutched each other and shrieked.

Mr. Fuller stuck his head out the driver's side window and looked above them. A round object, flat on top with a sort of dome in the center of the bottom, hovered above them, an eerie blue light shining down from it onto the Fullers' truck.

The truck bounced down again. This time the Fullers were silent.

Mr. Fuller drove slowly, carefully, while he whispered urgently to his wife about what he saw.

"No, don't look!" he shouted, but too late. Mrs. Fuller stuck her head out to see.

The blue light hit her straight in the face. Mrs. Fuller howled with pain. Her eyes felt like someone had stuck them with burning pokers straight from a fire.

Mr. Fuller turned the truck around and raced his wife back to town. The unconventional aerial object, whatever it had been, disappeared and left them alone.

The ophthalmologist who was called to the hospital said he'd never seen injuries like that in all his thirty-four years of practice.

The skin around Mrs. Fuller's eyes was so swollen he could barely pry them open even a little to look.

When he was finally able to shine a light on them, he said her pupils looked like blood-filled marbles. They took two weeks to return to normal. Mrs. Fuller was blind that whole time. They weren't sure she'd get her sight back, but she did.

And then the Fullers, intrepid husband and wife that they were, spent the next seven weeks driving up and down that same dark, lonely road hoping it might happen again.

It did. One night around midnight they felt the familiar lift again of their truck. This time both of them had the sense to keep their heads inside.

Four more people met with the mysterious craft and had their vehicles plucked off the ground.

And that's when the Agency sent out a new directive to all its teams urging them to be patient and send someone to stick around known sighting locations to see if it might happen there again.

The glowing white UAO—unconventional aerial object—here in Cortez, Colorado had been seen by multiple witnesses a week ago. They said it descended toward the ridge with a strange jerking motion and then settled there for over an hour.

The next morning Sheriff Hoyt found indentations that might have been from the base of the craft.

All the vegetation around those indentations had been burned in a perfect circle ten feet around.

Like maybe a craft had touched down or lifted off.

Locals talked about coming up here the day after and scooping up handfuls of the alien dirt to keep for themselves. They started showing it around. More people climbed the ridge to collect jars of the dirt.

Investigator Travis Baird had no hope that by now there would still be any samples worth collecting.

He would have to sit in the dark on this mountaintop and wait for a second visitation.