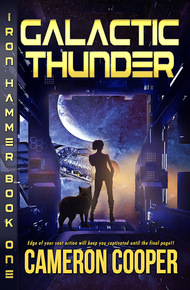 Cameron Cooper is the author of the Imperial Hammer series, an Amazon best-selling space opera series, among others.

Danny and her crew learn that humans may not be alone in the galaxy.

Thirty years ago, Danny and her crew on the Supreme Lythion were instrumental in the defeat of the sentient array, the crumbling of the Empire and the development of crescent ships.

Now wildcat crescent ships are opening up the known galaxy, finding more worlds to be settled and new resources. When the wildcat ship Ige Ibas goes dark and silent, Dalton comes to Danny for help, because his son, Mace, is on that ship. Despite their history, Danny agrees to try to find Mace.

But the Ige Ibas has gone dark for a reason, and Danny's investigation rouses the ire of a new enemy, one that emerges from beyond any worlds known to humans…

Galactic Thunder is the first book in the Iron Hammer space opera science fiction series by award-winning SF author Cameron Cooper. The Iron Hammer series is a spin off from the acclaimed Imperial Hammer series, and features many of the characters and situations from that series.

I looked up as I heard Vara's happy yip. She was vocal, for a wolf.

She charged up the slope from the river, her jaws open in her version of a smile. She was not heading for me. Rather, she was angling up the slope, heading for the section of the reserve where the big sliding doors gave access from the dome's public concourse.

I sat up, the numbness in my rear forgotten, as I spotted a golden explosion of thick fur, tail, nose and ears race toward Vara, bristling with pleasure.

It was Darb, Dalton's parawolf.

My breath caught. I kept my gaze on the two parawolves as they rubbed faces and sniffed at each other, then licked their welcomes, while everyone nearby watched them with indulgent expressions.

The last time I had seen Darb in the flesh had been when he was a pup. He was fully grown now, just like Vara.

I tore my gaze away from the pair and back to the public doors, scanning the people entering the reserve, looking for a tall man with brown hair.

My heart picked up its already unsteady pace.

Then I saw the white blonde woman beside him, with a sunburnt nose and long legs.

I sank back upon the plaid blanket, my confusion swirling in my gut, making me feel nauseous. All during this long, drawn out week, not had I once anticipated he might bring her with him. He never had, before.

Dalton picked out my tree with his gaze. It was easy to find. It was the biggest and oldest oak on the reserve. It stood out.

He saw me under the tree, but he didn't smile. He touched Fiori's arm and pointed to the oak.

She focused upon the tree. Her expression was pinched. When she spotted me, she didn't scowl.

I got to my feet and headed toward them. Halfway there, I gave the soft whistle that Vara knew not to argue with. She trotted toward me, bringing Darb with her.

We all met in the middle, which was directly beneath the hot lights, and therefore thin of grass and short on people.

Vara and Darb settled beside us, both panting happily.

I cut to the chase. "What's happened?"

Dalton opened his mouth to speak, swallowed, then tried again. This close, he looked wretched.

"Mace is missing," Fiori said simply. The pinched look I'd noticed from afar was the product of a deep furrow between her brows. She looked like someone had sucker-punched her in the gut.

"Missing?" I repeated blankly. Only, in my heart, I knew. Dalton's expression, Fiori's battered look, told the story they could not.

"The ship he was on has gone dark." Dalton's voice was strained. "Three days now."

Their beacon could have gone down. Or they were on the wrong side of a flaring star. A dozen other reasons why a ship might go silent ran through my mind. But none of them would cause a ship to stay silent for three days.

Now I knew why Dalton was late, and why he looked the way he did. If something bad had happened, Mace would be the second son lost to him and he'd never properly got over the loss of the first.