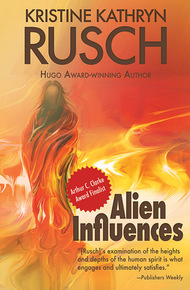 On the sun-scorched planet Bountiful, human colonists live peacefully alongside natives known as Dancers until an unspeakable disaster devastates the colony. Six children found dead, their bodies marked in a bizarre parody of a Dancer ritual. The crime's solution makes the situation worse, sending ripples throughout the sector, shattering lives.

One man tries to heal those lives. But can he heal everyone involved, and still save himself? A finalist for the prestigious Arthur C. Clarke award, Alien Influences shows the talents that make Kristine Kathryn Rusch one of the most popular authors working in science fiction today.

THEY BROUGHT HIM IN after the fifth murder.

The shuttle dropped him on the landing site at the salt cliffs, overlooking the golden waters of the Singing Sea. Apparently something in the shuttle fuel harmed the vegetation near the small colony, so they developed a landing strip on the barren cliff tops at the beginning of the desert. Winds and salt had destroyed the plastic shelter long ago, so he wore the required body scarf and some specially developed reflective cream. Before she left, the shuttle pilot pointed out the domed city in the distance. She said she had radioed them to send someone for him. He clutched his water bottle tightly, refusing to drink until he was parched.

A hot, dry breeze rustled the scarf around his face. The air smelled of daffodils, or so it seemed. It had been so long since he had been to Earth, he was no longer sure what daffodils smelled like.

Everything around him was golden, or bright, dazzling white. The sun felt like a furnace; the heat reflected off all the nearby surfaces. He had read that in some seasons, temperatures went beyond human endurance.

The desert spanned between him and the domed city. A narrow footpath wove its way over the slight dunes, appearing to lead to the city itself. The dome reflected the sunlight. From this distance, it looked small, about the size of his thumbnail, but he knew it housed over a thousand people, homes, and the Salt Juice plant.

He took a deep breath, feeling the dryness in his throat. It had been a long time since he had been off Minar Base. Even longer since he had been hired to do any on-site evaluations. He had prepared by meditating and by reading everything he could find on Bountiful—which was very little outside the production figures for Salt Juice. Still, he woke each morning in a panic, afraid that he was not up to the task they had hired him for. He had tried to be taken off the case, but Bountiful had insisted. They wanted him, a fact that bothered him more than anything else.

To his left, salt continually eroded down the cliff face, little crystals rolling and tumbling to the white beach below. The Singing Sea devoured the crystals, leaving a salt scum that reflected the harsh light of the sun. Perhaps this was where, decades ago, the miners had begun their slaughter of the Dancers. The Dancers were a protected species now, about one one-hundredth of their original numbers.

This place had quite a few protected species, but most lived far away from the colony. The only known Dancer habitat was at the edge of the domed city. All the materials sent to him on Minar Base pointed to the Dancers as the cause of the murders. The colonists wanted him to make a recommendation that would be used in a preliminary injunction, a recommendation on whether the Dancers had acted with malicious intent. That idea left him queasy and brought the dreams back.

Justin glanced back at the barren whitish-brown land leading to the dome. Colonists who escaped this place called it the Gateway to Hell. He could understand why, with the endless heat, the oxygen-poor air, and the salt-polluted water. Just before he left the base, he had spoken with an old man who had spent his childhood on this planet. The old man's skin was shriveled and dried from too many hours in an unkind sun. He ate no salt, and he filled his quarters with fresh cool water. He said he was so relieved to become an adult because then he could legally escape the planet. He had warned Justin to stay away.

He turned. A woman stood at the edge of the trail leading back to the dome. Her body-length white sand scarf fluttered in the breeze. She had dark skin and wide brown eyes. "I'm Netta Goldin. I'm taking you to the colony."

She smiled. "The ecology here is fragile. We have learned to accept a number of inconveniences. Be sure to stay on the path."

His fingers tightened around the water bottle. He hoped they didn't have to walk far. He was already breathless from the poor air, and he was out of shape. He had neglected his body in the years since Minar.

The reflective white cream gathered in the lines on Netta's face, making her appear creased. "I hear they brought you in from the base near Minar. Minar is supposed to be lovely."

"It is." A shiver went through him. Minar had been lovely, and he hated it. "Your name is familiar."

He remembered now. The scratchy female voice on the corded message. "Then you're the one who sent for me."

She adjusted his scarf hood. The heat increased, but the prickling on his scalp stopped. "You're the best person for the job."

"I deal in human aberration. You need a specialist."

"No." She threaded her arm through his and walked down the trail. The salt crunched beneath their feet. "I need someone who knows human and xeno psychology. You seem to be the only one left on either nearby base."

"I thought you were convinced the natives are doing this."

"I think the deaths have happened because of interactions between our people and the Dancers. It's clear that the Dancers killed the children, but we don't know why. I want you to investigate those dynamics. I also want this done fast. I want to do something about the Dancers, protect my people better than I am now. But I understand that you need to investigate the natives in their own environment, so we have taken no action."

The wind played with his sand scarf. A runnel of sweat trickled down his back. Small white plants he had never seen before—with prickly spines and a tough look—grew in small clumps in the salt and sand mixture. "I'm not licensed to practice xeno psychology."

"That's a lie, Dr. Schafer. I researched you rather heavily before I went to the expense of bringing you here. The Ethics Committee suspended your license for one year as a formality. That was nine years ago. You're still licensed and still interested in the field."

He pulled his arm from hers. He had sat by the sea on the first morning in Minar, too. He had been thirty years old and so sure he could understand everything human or alien. And he had understood, finally. Too late. "I don't want this job."

"You're the only one who can do it." She clasped her hands behind her back. "All the other xenopsychologists in the quadrant have specialized in one species or refuse to do forensic work. Besides, no one is better at this than you."

"They charged me with inciting genocide on Minar."

"And acquitted you. Your actions were logical, given the evidence."

Logical. He should have seen how the land encroached, poisoned, ate away human skin. He later learned that Minaran skin oils were also acidic, but didn't cause the same kind of damage. The original colonists had died first because of land poisoning, not because the Minarans were acting on an old vendetta. All the work the natives had done, they had done to save the colonists. He had ascribed a human motive, the ultimate sin in xeno work. It had been the wrong human motive and it had decimated a sentient race. "I don't want to make the same mistake again."

"Good," she said. The wind blew her scarf across her face. She brushed the cloth away with a cream-covered hand. "Because then you won't."