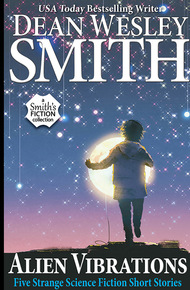 Dean Wesley Smith, famous for being one of the most prolific and wide ranging authors working today, draws on his library of science fiction short stories to produce this strangely twisted collection, Alien Vibrations.

From two androids falling in lust on an alien planet to a story that spans generations, Dean's science fiction reads like no other. Here he takes you along on an alien first contact to a movie, then jumps you a thousand years into the future to take a peak at a basic university class. The collection ends with a multi-generational story of looking for a lost gold mine and what finding it really means.

I am known to be one of the most prolific writers working in modern fiction, writing across many genres. But still most people would know me from the thirty-plus Star Trek novels I wrote back in the 1990s.

And a few people might notice I also wrote Men in Black novels and gaming novels and comic books novels, all solidly based in science fiction.

Now forty-some years later, I am still writing science fiction along with mystery and thrillers. But my one true love will always be science fiction.

So I figured I would put five of the stranger science fiction stories I have written lately in this single volume you now hold in your hands.

So starting off this collection is, in romance terms a "meet cute," where two people in a far-distant future meet while in android bodies. "Don't Rust on Me Now" combines a number of things not normally seen in modern science fiction.

"The Great Alien Vibration" takes the idea of first alien contact or sort of twists it. Well, not sort-of, it really twists it. And that's why I thought the title for this collection should be Alien Vibrations. All these stories are twisted away from the normal forms of science fiction.

In the very short story "For the Delusion that Waited" I took a modern invention and asked the simple question all science fiction writers ask: "What if this goes on?"

For the next story, I was given an assignment from an editor to write a story that extrapolates what the future would be like in one thousand years. Almost impossible to do, but I gave it a shot and the story "Nostalgia 101" came from that assignment.

"Playing in the Street" comes from my love of the history of Idaho. I was born and raised in Boise and still love the city and the state even though I haven't lived there for almost fifty years. I set my time-travel Thunder Mountain novels in Idaho because of that love of the history.

The governor of the state at one point was assassinated because of his stand on a mining dispute in Northern Idaho. I took that fact and tried to figure out what would be worth killing a governor? And as a science fiction writer, things got twisted and this story is what I came up with.

So I hope you enjoy these five samples of my science fiction short stories. At least as much as I did writing them.