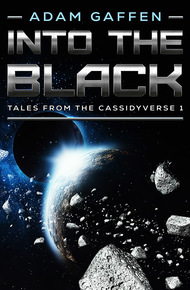 Adam Gaffen is the author of the near-future science fiction series The Cassidy Chronicles. Five volumes have been published to date, with additional stories appearing in anthologies and on Kindle Vella. A sideways prequel, Memories of Aiyana, was recently released by one of his main characters and he's not sure how he feels about that.

He lives in Colorado with his wife, five dogs, and five cats and wonders where all the time goes.

Into the Black - Tales from the Cassidyverse 1 by Adam Gaffen

Welcome to the Cassidyverse, the wider world of the Cassidy Chronicles, where life will take you in unexpected directions.

Kendra Cassidy's dream was to drag humanity to the stars. Along the way she invested her fortune, her sweat, and her blood to make the Terran Federation real. But she wasn't the only one; her crew struggled alongside her to bring it to life. These are their stories:

In "Recruiting Kendra, " a younger Kendra learns first-hand what it takes to turn an actress into an assassin.

In "A Dream Made Flesh," Diana, an AI and a leader of the Federation, wonders what it might be like to be human.

In "When 'cats Fly," Daniela is challenged to solve the problem of making a space fighter suitable for cat-sized sentients.

In "Murder on the Missouri," a cadet is murdered, Alyssa calls in the only human who can solve the case.

In "Hell Hath No Fury," A jealous, vengeful Admiral discovers that Ashley is the wrong Captain to exile to the frontier.

In "The Martian Gambit," Mikall and the crew of the TFS Nike face a last-gasp attempt to overthrow the Terran Federation.

And in "Thrown For A Loop," a story that spans centuries, Kendra and her wife, Aiyana, confront a threat to all of space and time.

Welcome to the Cassidyverse, the wider world of the Cassidy Chronicles, where life will take you in unexpected directions.

I met Adam through our LimFic.com website. He's a one-man machine, writing, publishing and selling his own books, especially his Cassidyverse series. This one serves up eleven tales of " bravery, love, creativity, and…staplers?" that provide a great entry point into the series. – J. Scott Coatsworth

Kendra declined to answer, knowing it would piss Talbott off more than replying. She swiped a gloved hand across her sweat-slicked blonde hair before moving forward again.

Orders, she thought. Creep around an abandoned nuclear power plant, and not even a fusion plant, no, an old-fashioned atom-splitter. I'll be lucky if I don't glow in the dark. Why am I doing this?

It was a frequent question in recent weeks since Talbott dropped the hammer on her. On the surface, the answer was simple: she'd been tricked into becoming a courier for a company called OutLook. Well, maybe not tricked. Coerced? Backed into a corner? She'd gotten there on her own, through her own blindness and naiveté, and so probably could have gotten out. If she'd turned them down, it might have been a personal disaster: bankruptcy, shame, her name muddied, all that. But she would have started over, rebuilt, survived.

But she'd chosen the "easy" route.

Being a courier? Sure! Go from point "A" to point "B" and drop something off?

Do that for a few years, part-time, and she'd be free of her obligation?

She could live with it.

"Living" wasn't guaranteed as a courier.

In OutLook, a courier didn't just bring a package from point to point. No, they were expected to go through any opposition or obstacle to make their delivery. This meant Kendra was learning all sorts of dirty, nasty, and dangerous tricks, as well as placement into training scenarios that tested her in ways she'd never dreamed.

Enter the Waterford 3 plant, retrieve an item within the command center, and return. Neutralize opposition as necessary; guards are not OutLook employees.

There was more, but that was the gist. Simple.

Until she was smacked with the reality of it.

And so here she was, completely unarmed and sitting in the dark. At least she was adequately dressed for the mission, a black outfit with some armored patches on the arms, legs, and chest. She sighed and peered at the main entrance. Four guards, pretty heavily armed and looking alert.

No problem; there were a half-dozen alternates. She faded back into the encroaching brush and made her way around the perimeter to the next.

Two more guards, just as heavily armed and standing in a pool of light.

Worse. Damn. She slapped at a mosquito trying to burrow into her neck and moved again.

Third entrance. Fourth. Fifth. Sixth. All guarded, all looking alert, and her task was looking more and more impossible. She slunk into the dark to think. Pout. Whatever.

Fine. I'll sit here until this stupid 'exercise' is over, and they can do what they want. Fire me. I don't care.

Her attitude lasted until the flashlight shone in her face and a harsh voice grated, "Get up."

Her hesitation brought the sound of a round being loaded into the chamber, and a growled, "Now."

Kendra slowly extended her hands before her. She had to appear harmless, and now she was regretting her outfit. Harmless? In a skin-tight black suit? Well, if it was easy, anyone could do it, and getting out of this with her skin intact wasn't going to be easy. She had an incentive: the local goons wouldn't have any hesitation about bruising, using, and abusing her.

"Thank Zeus you found me!" She put as much innocent relief into her voice as her years of acting could manage while studying her erstwhile captors. There were three: one to the left, leveling a rifle at her; one in the center, shining the flashlight; and one to the right, speaking. They wore the same style uniforms as the plant guards. Either they were connected to the plant, a roving patrol, or they seriously lacked imagination.

This means I'm blown if they've already called it in. Then again, nothing ventured…

She drew on her talents again and gave her body a shimmy, turning the skin-tight suit to her advantage. The guard with the light, a woman a couple centimeters shorter than herself, was the only one to react.

Got her attention. Now what?

Kendra opted for the bold play and reached for her. "Thank you! I've been out here for hours and hours and I didn't know where to go and I was gonna wait for the morning but now I don't have to!"

The surprised guard reacted as Kendra hoped, lowering the light and returning the embrace. "We've found you," she said.

"You did," she agreed with a hitch in her voice. Her fingers clamped around the light and wrenched it from the guard's hand. "Too bad for you."

The barrel bashed the back of the unsuspecting guard's head on the upswing, knocking her out and into Kendra's grip. She spun towards the armed guard and lashed out with a foot, catching his knee and forcing it sideways with a craaack. He fell, grasping the knee, rifle forgotten, but Kendra was already finishing the spin. The last guard's jaw proved as vulnerable to the heavy flashlight as the first's skull. She followed up with a blow to his head for good measure, snatched the rifle, and ran for the plant.

There was one last potential entrance: a cooling water outlet pipe, and she headed there now. The grating over the meter-wide duct was rusted and came away with a screech. She ducked her head and crawled in.

Later, she would decide the hundred-meter slog was a memory she didn't need to keep, between the sludge-filled water and the rusticles descending from the curved ceiling. For now, she endured.

I'm definitely going to glow after this.

She peered out. In the dim light, she could see across the bottom of a nearly empty concrete pool, fifty meters across and probably half that deep, and she gratefully scrambled out. She recognized where she was; the control room ought to overlook the pool. No point in concealment now. With any kind of luck, and Zeus knew she deserved some, all their protective measures would be outward-facing. She didn't have much choice in the end, so up the creaking rungs dripping slime, a dash across the tile and into the darkened room.

The package was small but heavy, sealed into thick plastic. She dropped the rifle, kept the flashlight, and retraced her murky way out. Once clear of the pipe, she sprinted in random directions, planning to reorient herself when she'd put some kilometers between her and the plant.

As the first fingers of dawn lit the sky, a haggard Kendra dragged herself into the rendezvous.

"Here," she said, dropping the package in front of Talbott.

"It's my favorite," Talbott said.

The right cross, which knocked Talbott on her ass and nearly got Kendra fired, was perfect.