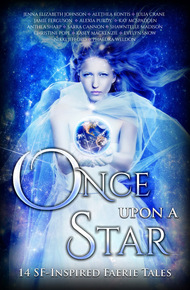 Fourteen talented authors bring their skills to SF retellings of fairytales, with stories running the gamut from pure fun to chilling dystopian futures. Prepare to journey to new and adventurous realms!

Once Upon a Star by Anthea Sharp, Alethea Kontis, and more!

From the bestselling authors of the award-winning Once Upon Anthology Series - revisit your favorite faerie tales, masterfully retold in science fiction settings with delightful (and sometimes chilling) twists. What if the Twelve Dancing Princesses were undead clones? What if the witch in Hansel and Gretel was an AI-sentient house? Are you ready for the Three Little Pigs… in space? These fourteen tales will entertain and inspire you, and you'll never see your favorite faerie tales quite the same way again.

Sharp charmed me with her beautiful, whimsical music at the north pole tale that I bought for the Fix the World anthology. Here she helms her own collection of short stories by fourteen gifted authors, each retelling a fairy tale in a science fiction setting. Three Little Pigs… in space? Sign me up. Just hoping that Miss Piggy is one of them… – J. Scott Coatsworth

The smell of hyperfuel hung in the air as Liza Roth waited to board the shuttle from Turmeric Central to the inner system spaceport.

She was bound… well, she wasn't actually sure where. Just that her time of sanctuary in the Temple of Vishnu was over.

Amethyst-colored eyes looked up at her through the plas-mesh bag she was carrying.

"Mrow," the cat inside said, as though in agreement that it was time they moved on.

"At least I don't have to smuggle you under my shirt this time," Liza agreed. That hadn't been a comfortable trip—for either of them.

But the priests of Vishnu, in addition to being devout holy men, had some of the best nanotech in the galaxy. Through their connections, they'd procured traveling documents for Shade as a licensed animal companion, with all the required shots and scans.

It helped that Shade was no ordinary cat. Once, she'd been the pet of some pampered lady of Quality. The genetic modification of her feathery wings—as smoke-colored as the rest of her—was evidence enough of that. Nightshade, as Liza had named her, was a high-class feline.

In addition to papers for Shade, the priests had given Liza several holo-IDs, with identities ranging from scullery maid to mid-level noble. For this trip out, Liza had chosen that of a tourist; one of those slightly eccentric lady travelers who took a notion to travel unaccompanied about the star systems.

Well, unaccompanied other than their pets.

"All passengers, proceed up the ramp," a tinny voice announced. "Shuttle A-4, enroute to Starhub Station. We depart promptly at half past the hour."

The British Galactic Empire ran on a strict schedule, and woe to anyone running late. Promptness and efficiency were prized, and transports waited for no one. A fact that had enabled Liza to escape from Earth, jumping on a ship at the last possible moment, ahead of her pursuers. Even her father's status as the Duke of Albany and Xersis-9 hadn't been enough to turn the shuttle around.

Now, though, she was Mrs. Rothbotham (a silly name, in her opinion, but the priests had chosen her false identities without consulting her) traveling about the system with her feline companion.