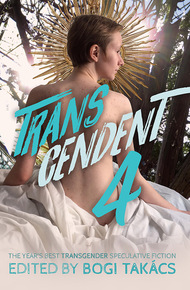 Bogi Takácsis is a Hungarian-Jewish agender trans person living in the Midwestern US for for the past few years. Married to author R.B. Lemberg, e is part of a cheerfu,l neuroatypical family.

The Trans Space Octopus Congregation was a finalist for the Lambda Literary Award.

An uplifted octopus finds a strange capsule in the water and wonders if one of the long-vanished humans might be found inside; witness the aspirations and failures of a strange society built around an enchanted archive; a team of scientists perform some reverse-engineering on a space station and shapeshifting becomes political; and other tales of AI, hybrids, and the far future. Author Takácsis tackles such issues as religious devotions, colonialism and migration, technological body modification, and queer identities. Features an introduction by Charlie Jane Anders.

I met Bogi at WorldCon in San Jose in the Before Days, on a panel about queer families in sci-fi, a topic near and dear to my heart. As the owner of QueerSciFi.com, diversity in speculative fiction has always been hugely important to me, and I am thrilled to be able to showcase some fantastic up-and-coming authors here who just happen to be trans. – J. Scott Coatsworth

It was also a year that saw much upheaval around the globe, so I realize this statement needs some explanation. Trans and intersex speculative fiction is booming. For Transcendent 4, I had the honor to consider 198 stories from 2018; this is a large positive change, and it makes me very hopeful for the future. I opted to write a shorter introduction this year, because there are so many good developments this year that I wanted to list, and so many longer-form works that I wanted to highlight. But I do want to tell you about this year's stories I picked from those 198.

I feel 2018 represented not just a year of numerical expansion for trans literature, but also a year of deepening. The stories I chose engage with related experiences thoroughly and unapologetically. This also means that there is some heavy work in the bunch, examining topics such as domestic abuse, sexual violence, family conflict and medical trauma. (Please make sure to take a look at the author-provided content notices at the end of the book!) But there is also plenty of love, acceptance, and exuberance. The works in Transcendent 4 often discuss complicated, difficult topics, but end with hope and solidarity. This has been characteristic of 2018 stories overall, not just the ones I picked; and I think this tells us a lot about what stories non-cis people—and also cis allies—would like to tell at this point in speculative fiction. We can go through great hardships, but we often survive, and hopefully thrive…even when nothing goes as planned.

The anthology begins with Nino Cipri's "Ad Astra Per Aspera," a story of losing your gender in Kansas (who will find it?). But it's not just gender that can go through all kinds of transformations, but also genre. The authors of Transcendent 4 engage in genre-bending with great joy and determination. José Pablo Iriarte offers a reincarnation-themed murder mystery story in "The Substance of My Lives, the Accidents of Our Births," and Izzy Wasserstein plays with cyberpunk in "Ports of Perceptions." "The Sixth World" by Kylie Ariel Bemis takes on apocalypse tropes and ages-old traditions simultaneously, with a sprinkling of anime voice acting.

Mental health in an often-hostile world has always been a major trans theme, but this year some of the stories like "Ghosts" by Blue Neustifter and "Assistance" by Kathryn DeFazio specifically focus on mental health support in a speculative context: by a friendly ghost or an assistive robot, among other possibilities. Everett Maroon's "Therapeutic Memory Reversal" presents a futuristic memory manipulation technique, with unexpected results.

Bodily transformation itself can also provide a focus: in "Nuclear Disassociations" by Aqdas Aftab, it's not only trans people who are experiencing sudden bodily changes; while in "Of Warps and Wefts" by Innocent Chizaram Ilo, people shift between two bodies and identities every night and day. Vampires are also a perennial favorite trans theme, and Tori Curtis provides a new take in "You Inside Me" by examining disability and organ donation.

People can be trans while doing practically anything, and the stories in Transcendent 4 show us some fascinating possibilities: like building robot dinosaurs in "Sphexa, Start Dinosaur" by Nibedita Sen, falling into the watery underside of the world in Sonya Taaffe's "The Face of the Waters," or finding dragons in Singapore in "The God of Small Chances" by L Chan. (If it sounds familiar: this story is a loosely-interpreted sequel of L Chan's previous deity-themed piece in Transcendent 3.) Watery themes also appear in Margaret Killjoy's "Into the Gray," where the protagonist finds prey for a carnivorous mermaid.

The stories also do not shy away from the more grim side of trans lives. In "Control" by Davian Aw, a body-swapping business venture goes terribly wrong, while in Andrew Joseph White's "Chokechain," the protagonist tries to find a way out from family conflict by all means necessary, including violence. Matthias Klein's protagonist in "The Art of Quilting" chooses a different path to deal with abusive family: running away, to the outer planets if need be. Catherine Kim's "Apotheosis" also shows that trans people can abuse each other, and that mythical beings sometimes eat humans. But sometimes it can be hard to determine who exactly is out to hurt us, as in H. Pueyo's "When the South Wind Whispers," where humans and artificial intelligence interact in sometimes-terrifying ways, and where allies are found in unexpected places.

I wish you a hopeful and resonant reading experience, and many more stories in the years to come!