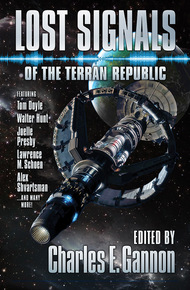 Dr. Charles E. Gannon's Caine Riordan hard sf novels (Baen Books) have all been national best-sellers and include four finalists for the Nebula, two for the Dragon Award, and a Compton Crook winner. In 2020, the "Caineverse" expanded into an exclusive imprint, Beyond Terra Press, under the aegis of Chris Kennedy Publishing. It has already brought the essential side series Murphy's Lawless to readers, has a second "season" in process, and is also reissuing the anthology Lost Signals of the Terran Republic.

Gannon's epic fantasy series, The Vortex of Worlds, debuts in 2021. He collaborates w/Eric Flint in the NYT/WSJ bestselling Ring of Fire series, has written two solo novels in John Ringo's Black Tide Rising world, and co-authored three volumes in the Starfire series. He's also worked in the Honorverse, Man-Kzin, and War World universes. His other writing credits include lots of short fiction, table-top roleplaying games (Traveller, 2300 AD, Twilight: 2000, Dark Conspiracy) and years of work as a scriptwriter/producer in NYC.

As a Distinguished Professor of English, Gannon received five Fulbrights. His book Rumors of War & Infernal Machines won the 2006 ALA Choice Award for Outstanding Book. He is a frequent subject matter expert for national media venues (NPR, Discovery, etc.) and for various intelligence and defense agencies. He resides in Annapolis, Maryland, with his wife and four living children.

Welcome to the Twenty-Second Century!

Ever-turbulent humanity has reached out to the stars and found itself challenged by several "exosapient" species whose motivations are as unusual as their physical forms. Troubleshooters like Caine Riordan must contend with both humans and aliens during this epic plunge into the high-stakes exploration, statecraft, and warfare that churn and change our post-contact world.

But no world is defined just by the characters who occupy center stage. "Lost Signals" digs deep into the lives—and struggles—of those beyond the spotlight by bringing together twenty new voices and new stories in a format that blurs the line between fact and fiction in the Consolidated Terran Republic.

Charles envisioned a universe where the Consolidated Terran Republic holds sway, against a backdrop of exosapient species, warfare, and exploration, and then invited twenty new writers to come play in it. If you love "shared universe" tales, this one is for you. – J. Scott Coatsworth

From his vantage point at eighty meters altitude, Wilder saw the Chrysler Cargomax's front left tire blast apart, streaming black tatters. The boxy van—a new hydrogen-oxygen fuel-cell model—lurched, swerved, slewed around to a broadsided stop in the middle of the road. Wilder slowed the cutting-edge government aircar; the whine of the lateral thrusters faded, the growl of the verticals increased. The aircar dumped velocity, shuddering into a slow forward crawl.

Wilder nodded at the Cargomax as they passed over. "Blow out—but a damned odd one. Tire went flat too fast. See if you can raise Security back at Picatinny; maybe they've—"

The commo pager toned once, twice: incoming message on a secure channel. Chu raised a hand to his headset, toggled open the circuit. A wash of static was supplanted by: "Juliet Delta Bravo Niner, this is Picatinny Security. Be advised: real-time analysis of local ambient audio indicates possible gunfire, your current sector. Repeat: possible—"

Chu interrupted. "Negative, Picatinny: not gunfire. Have observed truck with single tire blowout. Repeating: not gunfi—" and then Chu stopped. Wilder was accelerating, pulling the aircar into a tight, about-face loop. Chu took his hand away from the headset. "Colonel?" he asked, "Is something—?"

"Relay the truck's coordinates to Security, Mr. Chu." Wilder's eyes were back on the truck as they swung to reapproach it. "Security's right about the gunfire. That tire didn't blow out; it was shot out. That's why it flatted so fast. And given our proximity to the fusion reactor complex, I wouldn't be surprised if—"

The Cargomax's rear doors swung wide; two tongues of stuttering brightness licked out of the dark maw of the cargo bay. Considering the conditions, the marksmanship was impressive: two rounds of six millimeter caseless drilled into the aircar's fuselage. The rest of the autofire spray went wide and low.

Wilder accelerated, climbed, banked hard, came around for another pass. "Relay the coordinates," he repeated, as he leveled off and activated the nose cameras—which began tightbeaming directly to Picatinny Security and uplinking to the Pentagon. The muzzles of two assault rifle stared up at them, elevating slightly as they tracked the approaching aircar. Wilder grimaced: being shot at by terrorists had not been on the day's agenda.