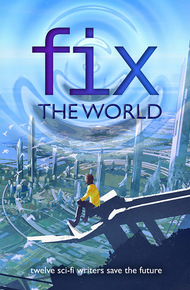 Bryan Cebulski is a rural California-based journalist from the Midwest who writes quiet queer speculative and literary fiction.

J. Scott Coatsworth lives with his husband Mark in a yellow bungalow in Sacramento. He was indoctrinated into fantasy and sci fi by his mother at the tender age of nine. He devoured her library, but as he grew up, he wondered where all the people like him were. He decided that if there weren't queer characters in his favorite genres, he would remake them to his own ends. A Rainbow Award winning author, he runs Queer Sci Fi, QueeRomance Ink, and Other Worlds Ink with Mark, sites that celebrate fiction reflecting queer reality, and is a full member member of the Science Fiction and Fantasy Writers of America (SFWA).

Rachel Hope Crossman grew up in Athens, Greece and Berkeley, CA as the child of a linguist and an actor. Her imagination, marked by the stones of the Acropolis, the granite slabs of the Sierra Nevadas and the blues of the San Francisco Bay, is the all and everything that fuels her engine. A preschool teacher, then substitute teacher, Rachel ultimately followed her Montessori bliss to teach elementary. Mother of four grown children and author of Saving Cinderella: Fairy tales & Children in the 21st Century, (2014 Apocryphile Press), Rachel currently writes eco-fantasy and science fiction stories.

Jana Denardo is Queen of the Geeks (her students voted her in) and her home and office are shrines to any number of comic book and manga heroes along with SF shows and movies too numerous to count. There is no coincidence the love of all things geeky has made its way into many of her stories. To this day, she's still disappointed she hasn't found a wardrobe to another realm, a superhero to take her flying among the clouds or a roguish star ship captain to run off to the stars with her.

J.G. Follansbee is an award-winning writer of thrillers, fantasy and science fiction novels and short stories with climate change themes. An author of maritime history and travel guides, he has published articles in newspapers, regional and national magazines, and regional and national radio networks, including National Public Radio. He's also worked in the high-tech and non-profit worlds. He lives in Seattle.

Ingrid Garcia helps selling local wines in a vintage wine shop in Cádiz and writes speculative fiction in her spare time. For years, she was unpublished. But to her utter surprise—after years of receiving nothing but rejections—she's sold stories to F&SF, and the Ride the Star Wind and Sword and Sonnet anthologies. She tweets as @ingridgarcia253 and is busy preparing a personal website and—dog forbid—even thinking about writing that inevitable novel

Jennifer R. Povey was born in Nottingham, England, but she now lives in Northern Virginia, where she writes everything from heroic fantasy to stories for Analog. She has written a number of novels across multiple sub genres. Additionally, she is a writer, editor, and designer of tabletop RPG supplements for a number of companies. Her interests include horseback riding, Doctor Who and attempting to out-weird her various friends and professional colleagues.

Mere Rain is an international nonentity of mystery whose library resides in California. Mere likes travel, food, art, mythology, and you. Feel free to reach out on social media. Mere Rain has published speculative short fiction with The Mad Scientist Journal, Mischief Corner Books, Things in the Well, and Mythical Girls.

D.M. Rasch writes feminist speculative fiction for LGBTQ+ young adults and adults, exploring where the social and political meet the personal. Her characters are often found doing their best in worlds that challenge them to become their best selves. Queer representation and reaching out to LGBTQ+ youth drive her writing, informed by her MFA in Creative Writing from Regis University and two bossy sister kittens who like to edit. She identifies as a genderqueer lesbian, currently writing and working (remotely) in the Denver, CO area as a creative mentor, coach, and editor in her business, Itinerant Creative Content & Coaching LLC.

Holly Schofield travels through time at the rate of one second per second, oscillating between the alternate realities of city and country life. Her stories have appeared in Analog, Lightspeed, Escape Pod, and many other publications throughout the world. She hopes to save the world through science fiction and homegrown heritage tomatoes.

Anthea Sharp is the author of the USA Today bestselling Feyland series, where a high-tech game opens a gateway to the treacherous Realm of Faerie. In addition to the fae fantasy/cyberpunk mashup of Feyland, her current novels are set in the shadowed enchantment of the Darkwood, where dark elves and fairytale elements abound. Anthea lives in sunny Southern California where she writes, hangs out in virtual worlds, plays the Irish fiddle, and spends time with her small-but-good family.

Alex Silver (he/him) grew up mostly in Northern Maine and is now living in Canada with a spouse, two kids, and three birds. Alex is a trans guy who started writing fiction as a child and never stopped. Although there were detours through assisting on a farm and being a pharmacist along the way.

We're a world beset by crises. Climate change, income inequality, racism, pandemics, an almost unmanageable tangle of issues. Sometimes it's hard to look ahead and see a hopeful future.

We asked sci-fi writers to send us stories about ways to fix what's wrong with the world. From the sixty-five stories we received, we chose the twelve most amazing (and hopefully prescient) tales.

Dive in and find out how we might mitigate climate change, make war obsolete, switch to alternative forms of energy, and restructure the very foundations of our society.

The future's not going to fix itself.

We all need a little hope. With so many things going wrong in the world – war, flood, famine and disease – I asked a bunch of writers to come up with ways to fix what's wrong. The twelve stories in this anthology tackle climate change, police brutality, food production, war, environmental destruction, and much more, and envision worlds where things have been made better. I'm very proud of this collection and these authors and will be releasing the sequel – Save the World – in June. – J. Scott Coatsworth

From "From the Sun and Scorched Earth," by Brian Cebulski

The glint of the mech's armor drifted across Lukas's room and hit the monitor on his desk sometime mid-morning.

He'd been sitting at his computer since before dawn. He stood and stretched, looked out the window to relax his eyes, relieve the screen burn.

The mech kneeled on its platform, the deep greenish-black armored body shining against a clear blue sky. Lukas wondered when the uncanny humanoid shape towering over the horizon had normalized.

On hot days like this, villagers would set up picnics beneath its shade. Upon request the boy who piloted the mech would spread its wings, rotate the body if need be.

It used to be called an angel of death. Marketed as one. Propagandized through an anime-influenced American franchise funded by the military. Now its ammunition, its missiles and bombs, were exhausted. The boy said he'd discarded the close-range weaponry long ago. He dismissed rumors that his machine was capable of manifesting a beamsword or laser cannons or using martial arts. These ideas were conjured up by creatively overstimulated minds, he assured them.

His eyes enlivened by the bright natural light, Lukas pulled the shade down, stood in the dark breathing in and out a few times as his eyes readjusted, and got back to work.

He pulled out another hard drive from the stack of storage devices—CDs, iPods, old mp3 players, flash drives—in a plastic box at his feet. He popped it into the drive dock, let the device do its work as it brought up old, potentially corrupted data.

The hard drive popped up as a folder on his old boxy rig. The monitor was functional but flickered, the color balance poor. It was still heartier than the flatscreen or projection-based monitors he had piled up around the shack, most of which needed a server connection to even boot up, a connection that no longer existed.

He double-clicked, sifting through corrupted folders, hoping for any data that might still be whole. He found one labeled "Music" and began to click through the files.

Against all expectation, he found it.