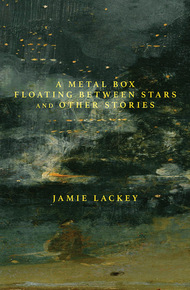 Jamie Lackey lives in Pittsburgh with her husband and their cats. She has over 160 short fiction credits, and has appeared in Daily Science Fiction, Beneath Ceaseless Skies, and Escape Pod. She has a novella and two short story collections available from Air and Nothingness Press. In addition to writing, she spends her time reading, playing tabletop RPGs, baking, and hiking. You can find her online at www.jamielackey.com.

A Metal Box Floating Between Stars by Jamie Lackey

Jamie Lackey's collection of 19 science fiction stories, A Metal Box Floating Between Stars and Other Stories will make you think, wonder, and hope. Journey within and away to find love across time, friendly and fearsome aliens, alternate realities, fungal zombies, and more.

I first met Jamie through SFWA, where she volunteers and runs the organization's Net Galley program. I first read her work in the lyrical and enchanting novella The Forest God, a fairy-tale about strong women and handsome princes. I was thrilled to see her submit a collection for this bundle – you'll love her beautiful prose and writing style. – J. Scott Coatsworth

Viscous suspension fluid sloshed in the bottom of the pod as Tanuma Futaba stirred. Her whole body ached and shuddered, and thick sludge gummed her eyes, nose, and mouth.

A warm hand cupped the back of her neck, under her mass of wet hair. "You awake?"

Futaba coughed up some suspension fluid and managed to nod. The hand helped her to a sitting position.

"Do you think you can stand? A hot shower will do you a world of good."

Futaba nodded again, and another hand grasped her elbow and pulled her upright. Her knees trembled, but held. "How're we doing?" she asked. The sound of her own voice surprised her—it sounded as thick and heavy as the suspension fluid that still pooled around her ankles. She coughed again.

"All systems green, all mission stats within expected parameters."

Relief washed away her exhaustion. Futaba scrubbed her free hand across her eyes and managed to force them open. The tidy gray interior of the suspension bay swam in front of her. She squinted and managed to recognize Dr. Alison Fugazzi, the crew's lead biologist.

"I'm not looking forward to it again, myself."

The shower was heavenly, and afterward Futaba managed to get into her uniform without any assistance. Alison waited in the mess with a cup of coffee and a squeeze package meal. "You're an angel," Futaba said.

Alison laughed. "Just remember how you feel right now when it's time to wake up your replacement."

"How was your shift?"

"It was a little lonely, but I got a lot of reading done and my research has been going well. I've been looking forward to some company."

A chime sounded. "It's time to check the instruments," Alison said. "Are you up for tagging along?"

Futaba nodded. They left the spinning crew section and climbed into the zero-g command station. Alison settled into the single chair and belted herself in. Futaba clung to the handholds behind her and watched as she went through the general checks. Everything did seem to be running smoothly.

Futaba itched to get started on her diagnostic checks, but reminded herself that she had her whole three month shift—there was no rush. "Are all of the maintenance bots working correctly?"

Alison nodded. "It's been smooth sailing for each shift so far."

"That means that we've made it through almost a complete rotation without any trouble."

The 20-person team was mostly scientists, but they had two doctors and two engineers. Their shifts were positioned in the middle and end of the rotation allow regular checks on the status of the ship and the health of the crew.

Futaba had never met the other engineer, except during the briefing before they were all loaded into their suspension pods. She was pretty sure that he was the tall black man—one of the four Americans on the crew, along with Alison. Dr. Batten hailed from England, and Futaba was the crew's sole Japanese member, not that national boundaries meant all that much, since global unification. Still, Futaba was proud to represent her country, and pleased by the diversity of the crew—the 20 of them represented 13 separate nationalities.

Competition for crew slots had been brutal, even though the mission was a one-way trip and had required sterilization surgery and extended periods in cold sleep.

But Futaba had been determined to come. She'd dreamed of travelling through space since she was a little girl. She spent her childhood building model mecha, and had quickly moved up to constructing robots. The maintenance bots on the ship were based on her designs.

After the systems check, she and Alison chatted over a game of chess.

"It's going to be odd when everyone is awake," Alison said. "When we finally get there, I mean. It's so quiet in here now, but with 20 people moving around it'll get crowded fast."

Futaba laughed. "Hopefully we'll get our fill of alone time before we get there."

"Yeah, I'm sure we will. Well, I'm gonna call it a night," Alison said. "My room is the third door on the right—I'm not sure which one is yours, but there will be a nameplate on the door."

She found it without any trouble—it was the seventh door on the left. An engraved nameplate read Tanuma Futaba in English, then in Kanji.

She hadn't packed many personal items—a calligraphy set, a glass fūrin painted with sakura blossoms that had hung in her grandmother's bedroom window, and a few physical books. She hung the fūrin near the vent. The paper tanzaku fluttered, and the wind bell chimed.

Futaba recovered from her stasis sickness within a few days. She helped Alison pack up her personal experiments and put them on ice and learned the simple things she had to do to keep the long-term experiments going.

She helped Alison into her suspension pod and watched as the opaque gray fluid surrounded her. When the sequence was complete, the beep sounded just like Futaba's rice cooker.

Days slid by. She monitored the instruments, performed basic maintenance on the ship's systems, monitored experiments, and filled out weekly status check-ins meant to monitor her mental wellbeing. She spent a few hours each night reading or watching shows on her tablet—the crew had each been allowed to request specific items for the ship's digital library, and there was an impressive amount of material.

As she set to work on the maintenance robots that scurried around the crew quarters, she noticed that one, D7, didn't return to its pod when it was inactive. Instead, it tucked itself in a corner in whatever room she was in. It rolled after her when she moved like a silent puppy.

She checked the robot's hardware, and found it to be in perfect working order. She tapped its round metal head. "Something odd is going on in there, buddy." She pulled up the other engineer's notes to see if he'd noticed anything odd with the bot.

Apparently, he was experimenting with limited AI. He'd introduced subprograms into a handful of the maintenance bots—he was hoping that the 60 year runtime might net some useful results.

Futaba decided to write him a note to let him know that D7 was showing results. The ship's system already had internal messaging set up.

Hello! I just wanted to let you know that I've noticed that D7 has been following me around instead of returning to his pod. There are no issues with his performance, and his hardware all seems fine. It looks like this might be the result of your research, so congrats! It looks like it's going well.

I hope your shift goes as smoothly as mine has!

She spent that evening in her room, working on her calligraphy. D7 sat in the corner, and her fūrin chimed. It felt like home.