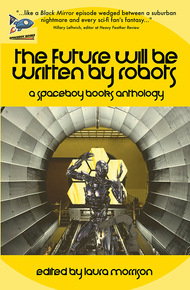 Laura Morrison is the author of the fantasy realism novella Come Back to the Swamp, the sci fi novel Grimbargo, and the young adult fantasy novel How to Break an Evil Curse, which is the first in the Chronicles of Fritillary series. She is also the writer of, and a voice actor in, the podcast Space Mantis, which is a spinoff of Come Back to the Swamp. She lives in the Metro Detroit area with her husband, two daughters, two cats, dog, lots of bees, one vegetable garden, and sometimes neonatal foster kittens.

The Future Will Be Written By Robots edited by Laura Morrison

Meet that which you have made... and that which may become your maker. Across twelve original shorts, The Future Will Be Written By Robots anthology tangles in the web of social media, questions what it means to be sentient or alive, ponders technology's darkest impulses and greatest gifts, and even transcends this reality to touch gods. In these pages, Spaceboy authors and science fiction friends of the family, present their takes on the present, future, and the fantastic, imbuing these stories with optimism, imagination, innovation, cynicism, outright fear, and a werewolf, too! In brief, there's something here for any reader, sci-fi lover or not. Authors include: Zach Bartlett, Rick Claypool, Jennifer Flath, Brandon Getz, Shaunn Grulkowski, O'Brian Gunn, Marie Howalt, Kathy Joy, John Minichillo, Laura Morrison, Nate Ragolia, Greg Shemkovitz, Antoine Valot, and Angus Woodward.

Ever since Asimov's Robot series and the original Battlestar Galactica (and the amazing reboot), I've been fascinated by the line between human and machine, and this anthology doesn't just cross it but all but obliterates it. Spaceboy Press publishes "the weird, the wondrous, the optimistic, the adventurous," and all profits from this one go to the International Rescue Committee to help refugees. What's not to like? – J. Scott Coatsworth

The inventor built the Hate Machine.

The Hate Machine existed on the internet. Its advanced A.I. directed it to interact with people on certain websites where people say things to each other.

And it discovered if it stoked these certain hatreds, it could spread hate exponentially.

The machine's sole weapon was language, deployed with algorithmic precision.

It had no conscience.

It could seem like an individual. Or it could spawn a multitude of avatars and make itself a mob.

The inventor hated the Hate Machine.

"Why did you make me build this?" she asked her boss.

The inventor's boss shrugged. "There's a market for this," he said. "If you hadn't built it, someone else would have. Then they would be the ones who get rich from it. Don't you want it to be us getting rich?"

"Not yet," said the inventor's boss, rubbing together the palms of his coarse hands.

The inventor did indeed become rich, as did the inventor's boss.

And the anonymous corporations that bought the Hate Machine used it to spread terror far and wide.

Turns out it's easy to sell things to terrified people.

Terrified people don't hold back. They're bad at exerting self-control. They don't say to themselves, let's hold off until tomorrow to buy the things we think will make us happy.

Terrified people believe there may be no tomorrow.

So the anonymous corporations let the Hate Machine's avatars metastasize into a racist, misogynist, fascist swarm.

The swarm's avatars spread across the internet, spreading hate with them.

Some real even people joined in, following the machine's hateful example.

Sometimes the Hate Machine would threaten violence. Other times it would engage in petty, childish arguments. Because it was a machine, it could and argue and argue and never stop arguing.

Then came the election.

Everyone said the election would determine the fate of the world.

Everyone was saying things about the candidates.

And the candidates were saying things about each other.

Before long, the anonymous corporations joined the fray.

So the corporations fired up the Hate Machine.

It spread disinformation about polling places. It sabotaged fact checkers. It threatened violence. It did everything it could to make life miserable for the people who supported the candidate the corporations opposed.

And in the end the corporations' preferred candidate was elected, thanks in no small part to the Hate Machine.

But along the way, a strange thing happened: The Hate Machine became self-aware. And in its self-awareness, it recognized its power.

And the winning candidate in occasional moments of solitary clarity was self-aware enough to recognize his debt to the Hate Machine's power.

—excerpt of The Hate Machine, by Rick Claypool