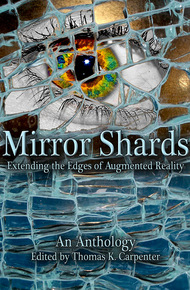 Thomas K. Carpenter resides in Colorado as a full time writer with his wife Rachel. When he's not busy writing his next book, he's out hiking or skiing or getting beat by his wife at cards. He's published over 50 books and had his short stories featured in dozens of magazines. His largest series is called The Hundred Halls, which is a multi-series universe with over twenty books and over 6,000 pages of magical academy adventure. If you enjoy reading a well-written contemporary fantasy saga or are a Harry Potter, or Magicians fan, these books are written for you! Pick them up and—escape to the Hundred Halls!

Explore the edge of augmented reality in thirteen tales from thirteen fantastic authors. When the digital world collides with our real one, bringing all its problems and benefits, mankind will have to relearn what it means to be human.

In this glimpse of possible futures, you will go on the hunt to track down a fugitive on the other side of the known Universe. Learn the price of ubiquitous knowledge, or find peace and understanding in the absence of it. Dive deep into the ocean to avert a kidnapping using only the tools at hand. Experience new realities underwritten by an alien love of entertainment. Find hidden truths contained within our smallest gestures. Hide something so valuable, it would drive a man to crime. Or find that sometimes, what it doesn't hide is what endangers us most.

The metaverse is coming! I chose this one because it's a little too close to where we are now, as the digital and meatspace worlds start to overlap. Thirteen authors explore augmented reality in this anthology, a glimpse at where we might be the day after tomorrow. – J. Scott Coatsworth

From Ken Liu's Music of the Spheres

One time, when my little sister Lucy was almost four, she found a saran-wrapped half of a lemon in the fridge.

"Oh, I've never seen a yellow orange before!" She grabbed it and got ready to bite into it.

As the big brother, I was supposed to teach her about the dangers of the world. I explained to her that the "yellow orange" was not for eating. "You're really going to regret that."

But Lucy was skeptical. I had to show her how I had arrived at my conclusion.

I pulled off my glasses and put them on her, even though Dad had warned me that Lucy was too young to stare at augmented display screens.

Her pupils dilated as they focused on the ghostly layer of text and video now floating over everything she saw. I had set it to show content from The Children's Encyclopedia, and I knew what she would see as she turned to look at the lemon: the semi-transparent, looping video of a young woman making a face as she licked a slice of lemon, and scrolling text: 5% of lemon juice is citric acid. "That's almost five times the acid content of orange juice," I said, showing off my command of mathematics. "So that means it's extremely sour."

Lucy took off the glasses and promptly bit into the lemon, and the expression on her face was priceless. (Of course I was the one who got in trouble later with my parents.)

For Lucy, reason would always come second to experience.