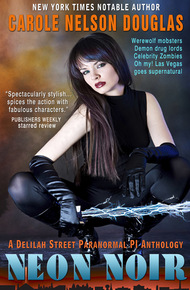 Delilah, who walks the mean streets of a paranormally post-apocalyptic Sin City fighting supernatural mobsters with wit and grit, "is a character who will enchant you from the very first page…Douglas's world-building is excellent…[Vegas] is glamorous with a filthy underbelly where zombie traffickers exploit the dead and humanity hides the horrors it inflicts upon the innocent. Her cast of zombies, vampires, demons, were creatures, humans...are interesting and exciting…beautifully detailed and most importantly all play a great role."—Bitten by Books

"Douglas has populated her Post-Millennium Las Vegas with the most outrageous and outlandish cast of supporting characters this side of The Wizard of Oz. Every character, every situation has a mystery surrounding it... Each proceeds logically from the last dishing out of surprise after surprise…rich details and inventive mysteries completely submerge you in the story. [You'll find] dire straits and grave consequences...an unexpected twist, an action-packed cinematic finish. Powerful stuff."—SciFi Guy

So prowl post-monster apocalypse Vegas from Delilah's retro office, courtesy of Sam Spade...to the Strip's Inferno Hotel Bar, where Nick and Nora Charles and Asta the dog hang out, thanks to the lucrative magic of Cinema Simulacrums. Meet the Invisible Man in "Snow Job," the Lon Chaney & Son roster of classic film roles from the Wolf Man to the Phantom of the Opera in "Monster Mash," and watch feline PI Midnight Louie help Delilah solve a vampire murder case in "Butterfly Kiss." Humphrey Bogart turns up in a freakish role reversal in "Bogieman" and Delilah battles an egotistical demon with a bloodthirsty edge who is wreaking havoc on an albino vampire's rock band in "Snow Job."

I see Carole Nelson Douglas almost every year at DragonCon, and she always has one project or another up her sleeve. She had just read my Dan Shamble series (was even kind enough to give me a quote for the cover), and she pointed out her Delilah Street urban fantasy series. Obviously, the wheels started turning in my mind! She put together Neon Noir for this bundle, and it is not available anywhere else. – Kevin J. Anderson

Everyone has family issues, but my issues are that I don't have any family. My fresh new business card reads Delilah Street, Paranormal Investigator, but my old personal card could read Delilah Street, Unadoptable Orphan.

I grew up in Wichita, Kansas, and was supposedly named after the street where I was found abandoned as an infant. I've Googled and Groggled (the drinking person's search engine) the World Wide Web for Delilah Streets. All I know is that not a single bloody one of them is to be found in Kansas. Whoever my forebears, they gave me the Black Irish, Snow White looks—corpse-white skin and dead-of-night black hair—that turn out to be batnip to vampires.

My striking blue eyes are my best feature, but that only IDs me as the most wanted woman on the planet. Not that I'm vain about that, because the way I'm wanted is Dead or Alive. More on that later.

Of course it is now the unlucky teen years of the Millennium Revelation, What arrived after 2001 came and went were a slew of unexpected illegal-alien residents. The threatened religious apocalypse didn't happen, but the turn of the 21st century brought all the bogeymen and women of myth and legend out of the closet and into human society.

My unwanted orphan childhood is history now that I'm twenty-four and on my own. A jealous weather-witch forecaster forced me out of a good reporter job covering the paranormal beat for WTCH-TV in Wichita, Kansas. Now I'm a freelance investigator in wicked, mysterious post-Millennium Revelation Las Vegas, which is crawling with daylight vamps and werewolf mobsters and celebrity zombies and who-knows-what-else.

I have a few driving ambitions.

One is staying alive. Without turning vampire.

Two, tracking down my missing spitting image to find out if she is a twin, double, clone, or even alive. Seeing her/me being autopsied on a CSI V: Las Vegas one rerun TV night in Wichita brought me to Sin City in the first place.

Lucky me, she turned out to be the most desirable corpse ever featured on the internationally franchised show. Apparently, CSI corpses are the new It Girls.

Bad news: This "Lilith Quince" supposedly had an early exit contract to kill herself, which would make her star turn as a CSI corpse into a reality TV dissection. Good news: You can't believe anything you see and hear in the post-Millennium Revelation era, especially in its quirky and commercial capital city of Las Vegas. So Lilith could still be alive.

Then there's ambition number three: having my first serious relationship with non-vampire, fully human (so far) Ricardo Montoya. We met in Vegas's Sunset Park just after I hit town and just before it hit me back, hard. And, yes, Ric—ex-FBI guy, a.k.a. the Cadaver Kid—is tall, dark, handsome, and Hispanic.

I have other allies. One has heavenly blue eyes and is seriously gray and hairy. That's my 150-pound dog, Quicksilver. He's a wolf-wolfhound cross I saved from death at the pound. He returns the favor with fang, claw, and warm, paranormally talented tongue. I have a soft spot for dogs, especially since Achilles, my valiant white Lhasa Apso in Wichita, died from blood poisoning after biting a vampire anchorman who was trying to fang me. Lhasas are long-haired little dogs with terrier grit who were bred to guard the ancient Tibetan Dalai Lamas. Achilles' ashes rest in a dragon-decorated jar on my Las Vegas mantel, so I haven't given up the ghost on a reincarnation.

Oh, yeah, where that mantel is might be of interest. I rent an Enchanted Cottage on the Hector Nightwine estate because he says he's guilty about offing my possible twin on national TV. He produces the many worldwide CSI franchises, but the ghoulish Hector doesn't have a conscience, more like a profit motive. He's banking on my finding Lilith, or becoming her for his enduring benefit.

The only thing Hector and I have in common is a love of vintage black-and-white films. The Enchanted Cottage is the setting from a 1940's movie of that name, where an unattractive couple's true love made them see themselves as the glamorous movie stars who played them. So the place is a mix of Ugly Duckling Central and Cinderella's unhappy home. I also suspect it's supplied with the gabby mirror from Snow White. Although it's been mum with me (so far), I see dead people in it.

A shy (to the point of invisible) staff of who-knows-what supernaturals run the joint.

The most complicated beings in my brave new world are the CinSims. Cinema Simulacrums are created when fresh zombie bodies illegally imported from Mexico are blended with black-and-white film characters. The resulting 3-D "live" personas are wholly owned entertainment entities leased to various Vegas hotels.

Hector and Ric are sure the Immortality Mob is behind the brisk business in zombie CinSims, but can't prove it. I'd like to help them both out, because I'm the classic crusading reporter who's against human and unhuman exploitation. And because my own freedom is threatened by several merciless and downright repellent factions trying to make life after the Millennium Revelation literal Hell.

Luckily, I seem to have some off-the-chart abilities simmering myself, involving the silver from mirror backings, the silver nitrate in black-and-white film strips, and reflective surfaces.

And I have one more sorta sidekick…a freaky migrating, shape-changing lock of hair from the albino rock star who owns the Inferno Hotel, who goes by the names Christophe for business, Cocaine for the Seven Deadly Sins rock band, and Snow to his intimates, which I no way want to be.

I made the mistake of touching the white lock of his hair Snow sent me as a sardonic bow to my Biblical namesake's history in literally curtailing male power. It reminded me of Achilles' long white coat… My touching that albino tress turned it into a morphing sterling-silver familiar that can play decoration or weapon. It has a permanent lock on my body no jeweler's saw or torch can remove. I consider it a variety of talisman-cum-leech, not fondly.

I've been called a "silver medium," but I don't aim to be medium at anything, most of all finding out who I really am and who's been bad and who's been good in my new Millennium Revelation neighborhood. When things go wrong, who ya gonna call? Me. Delilah Street.