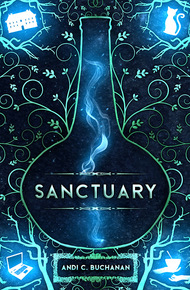 Andi C. Buchanan lives and writes just outside Wellington, New Zealand. Winner of Sir Julius Vogel Awards for From a Shadow Grave (Paper Road Press, 2019) and their short story "Girls Who Do Not Drown" (Apex, 2018), their fiction is also published in Fireside, Mermaids Monthly, Cossmass Infinities, and more. Their novel Sanctuary (Robot Dinosaur Press, 2022) tells the story of a queer, neurodivergent found-family who live in a haunted house.You can find Andi at andicbuchanan.org or @andicbuchanan on Twitter.

Morgan's home is a sanctuary for ghosts.

The once-grand, now dilapidated old house they live in has become a refuge for their found family. From Morgan's partner Araminta, an artist with excellent dress sense, to Theo, a ten-year-old with an excess of energy, to quiet telekinesthetic pensioner Denny, all of them consider this haunted house their home. In a world that wasn't built for their queer, neurodivergent selves, they've made it into a place they belong.

Together they welcome not just the ghosts of the house's former inhabitants, but any who need somewhere to call home. Both the living and the dead can find themselves in need of a sanctuary.

When a collection of ghosts trapped in old bottles are delivered to their door, something from the past is unleashed. A man who once collected ghosts – a man who should have died centuries before – suddenly has the house under his control. Morgan must trust their own abilities, and their hard-won sense of self, to save their home, their family, and the woman they love.

A gorgeously imagined queer take on both ghost stories and found families, with some profound things to say about community. – Catherine Lundoff and Melissa Scott

The ghost of Henrietta Casswell (died in childbirth, 1781, within these very walls) floats by as I'm setting the table for dinner.

My mouth feels dry and I swallow before I speak. I can speak much more easily when there are only ghosts around than I can to living people, but it's still not easy.

"Good morning Henrietta," I say, trying to remember which spoon goes closest to the plate. "Do you want to join us for dinner?"

By the time I've got the words out, she's already halfway through the ceiling–which means halfway into my bedroom. Her legs, skirt, and no doubt many layers of undergarments, though of course I don't look, dangle high above me.

"You're welcome anytime," I say, smiling to myself, but she's gone.

I secretly dream of having a sturdy oak table with carved legs and matching chairs, one that fits the grandeur of our high-ceilinged dining room. In reality, our table is comprised of six smaller tables of approximately equal height (and at least two of them salvaged from skips) shoved together. When my nan died, Dad gave me boxes of her stuff, including more tablecloths than I could ever imagine her needing. I've found a use for them, and they make this creation look as much like a single table as it's ever going to.

I set places for eleven. There are eight of us living people, plus I've set a few aside for any ghosts who may wish to join us. Ghosts don't eat, not exactly, but like us, they know that sharing a meal isn't just about food.

In the kitchen next door, I can hear Araminta and Alison laughing as they cook. I head through to help them carry the food, messaging the house group chat on my way to tell the others to get ready.

It's the last day of the holidays for Holly and Theo, so we've planned a special meal. Araminta has been tracking deals and using her and Holly's staff discounts for weeks to get this together, and the smell wafting through the air makes me hungry already. Theo is the first to arrive, his hair neatly buzzed, skidding across the hallway in those trainers with wheels in the heels that he will not be able to wear at school, so apparently he has to make the most of now, life or limb of the rest of us be damned. Theo's ten years old, Black, and has more energy than the rest of us combined–or at least it feels like it. He proudly demonstrates that yes, his hands do smell of soap, and I ask him to help us carry in food.

The table fills up quickly. There are no two ways about it: this is a midwinter feast. The pizza is topped with roast pumpkin and rosemary, and steam wafts from the pot of beef stew and dumplings at the centre of the table. Numerous other plates are tetrised between them; cheeses and salads and mini tarts. And there's still dessert to come.

I've saved the seat next to me for Araminta and when she arrives, she throws her arms around me, kisses me briefly but demonstratively. I don't move much in response; I'm not like her in that respect, but I can't stop a grin from finding its way to my face, and feeling warm despite the winter outside.

"Would someone like to say some sort of grace?" Alison asks, shifting her placemat slightly so it aligns with the table. She's a thin white woman in her fifties, her pencil-straight hair dyed dark blonde and cut in a bob. "An atheist version like..."

Vinnie throws their hands up in the air, the sleeves of their blazer falling back to reveal perfectly starched cuffs, fastened with silver cufflinks, a white glare against their dark brown skin.

There's as much laughter in their voice as there is exasperation, though, and even Saeed grins.

"Right, fine, I'll do it," Vinnie says at last. "Thank you to Araminta and Alison for preparing this wonderful meal. May we share it with joy and friendship, may Holly and Theo have a successful Spring Term, and may Holly not work too hard."

"What about me! I need to not work too hard too!" Theo insists, looking at Vinnie with indignation.

Vinnie looks at their son with mock-sternness.

"When your report card predicts you an A* in every single A-level and Morgan has to knock on your door each night to check you haven't fallen asleep on a pile of books, you too will receive the same wish."

I ignore them. I'm helping myself to the platter full of mini sausages wrapped in bacon and cheese. It's barely two weeks since Christmas, two weeks since Araminta and I visited my parents' home and celebrated along with my brother, and his partner and baby. And now we're back in our own home, this huge old house that is ours for now only because Denny's property-developer sister has so far found turning it into apartments more trouble, and more money than it's worth.

The fact that tradespeople kept refusing to return after the odd bit of mild haunting probably helped with that.

So for now at least, this is home, and these people gathered around this table are those I share it with. It's like I have multiple families, and I love them more than I could ever find words for, which isn't bad for someone once deemed incapable of relating to people.

Jodie Keane, the most recently deceased ghost to have found refuge here at Casswell Park, joins us, sitting down on one of the empty chairs. Some ghosts are more corporeal than others – exactly why is complicated, but broadly speaking they become less corporeal over time. The older the ghost, the less substantial it is, which may explain why I've never seen a bronze age ghost. And also explains why Jodie, born in 1980 and killed in a car accident that wasn't entirely accidental a little over fifteen years later, is actually sitting on the chair, not just hovering above it with legs bent. Holly, sitting nearest, ladles out some stew for her. Holly's white-blonde hair, normally plaited, is in a loose ponytail which fans out across her back. Jodie doesn't eat, but she seems happy to have been given food, leaning over the steam rising from her bowl. Perhaps there is some part of her that can still smell it.

I'm halfway through a blue cheese, walnut, and caramelised pear tart when there's a knocking sound coming from the main door. We all pause and look up. Denny grabs the fork he's been idly levitating and spinning above his plate, and places it firmly down on the table. I look at him and notice the wrinkles on his face, white skin darkened by decades of sun. He smiles at me.

"That'll be our ghost hunting friends," Alison says with her mouth full. There's a collective sigh.

"Can I shoot them with my nerf gun?" Theo asks.

"No, you may not," says Vinnie. Their words are clear, but I can tell they'd also like to go after the self-styled ghost hunters with a nerf gun – or perhaps something that would cause a little more damage.

"I'll go," Araminta says quickly, already on her feet. I cram the rest of the tart into my mouth and follow her down the wide hallway to the central foyer from which the twin staircases fan out. On our way, we pass the ghost of Tim McCabe (died 1854, Broad Street cholera epidemic) who seems completely oblivious to us. Araminta and I have lived in the same house for three years, been a couple for almost two, and I'm still taking every opportunity to spend snatches of time with her. I wouldn't want it any other way.