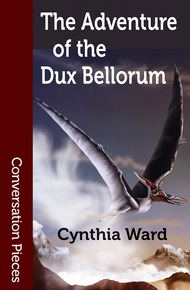 Cynthia Ward has published stories in Analog, Asimov's, Black Cat Mystery, Nightmare, Weird Tales, and other magazines and anthologies. She edited Lost Trails: Forgotten Tales of the Weird West Volumes 1-2 (WolfSinger Publications). With Charles G. Waugh and Jeffrey Linscott, she coedited Weird Trails (Sam Teddy Publishing). With Nisi Shawl, Cynthia cocreated the Writing the Other fiction workshop and coauthored Writing the Other: A Practical Approach (Aqueduct Press), which were honored with a Locus Award.

Finalist for the Gaylactic Spectrum Award for Best Novel, 2018

The Adventure of the Dux Bellorum by Cynthia Ward

Intelligence agent Lucy Harker receives the most dangerous assignment in the world—keeping Winston Churchill safe on the Western Front. Despite her unique abilities as Dracula's daughter, she loses Churchill to Kaiser Wilhelm's inhuman allies. If she's to recover Britain's greatest leader, Agent Harker must gain the aid of her Austrian lover, Countess Karnstein—better known as Carmilla. But the notorious vampire is keeping secrets that might doom the British Empire.

The Adventure of the Dux Bellorum is the second novella in the Blood Thirsty Agent series.

A wild pulpy blend of history and fiction featuring lesbian vampire spies in a steampunky Europe during World War II. Volumes I and II of the Blood-Thirsty Agent series. – Catherine Lundoff and Melissa Scott

As I enter M's office, I say, "What mission would be critical enough to recall me across the Channel?"

"If you're going to argue, Miss Harker, wouldn't you rather be comfortable?" Raising an immense hand, M gestures at the pair of empty chairs before his desk. I take a seat and he produces a Manila folder. "You're to protect this man until he's back in England."

I glance inside the folder and laugh. "Protect the bloody architect of Black Friday?" I say. "I'd rather lash his face with a dog-whip."

M is learning not to rise like a trout to my bait. Mildly, he says, "You'll keep your suffragist sympathies to yourself."

"My views are irrelevant. The man who set the peelers on a peaceful women's demonstration won't want a woman bodyguard."

"It won't matter what he wants," responds the head of the Empire's Secret Intelligence Service.

"Why does Churchill suddenly need my protection, anyway?"

"He's resigned his post to rejoin his old regiment on the Western Front."

Memory fills my mind with sensations. Mud and blood and rot, screams and gunfire and explosions, men wounded or dead in field and trench and hospital. I recover from wounds that kill mortals and can only watch as they die by the thousands.

"He says he'll do King and Country more good on the front than anywhere else," M says. "Which is absurd, but he carries the blame for Gallipoli and no longer has a place in Prime Minister Asquith's government." He studies me with deceptively watery grey eyes. "Churchill craves power the way others crave air. Without it, he behaves self-destructively. A commission would counter that."

I marvel at a melancholia so profound as to render the Western Front a mortal's safest location.

M says, "Churchill's got the new design of submarine implemented and the Royal Navy ships converted to the heat-ray technology. Now he's out, and our government has ceased further development of the Martian technologies. You understand why I'd like to keep him alive long enough to see him back in favour."

"I daresay. Without the Martian technologies, Britain remains evenly matched with the Central Powers on the ground and has nothing to match German Zeppelins in the air."

"I'll do my best to keep Churchill alive," I say. "But if an artillery shell has his name on it —"

"Your mission is more concerned with supernatural threats."

"Of course." Slowly, I say, "My powers are not unlimited. Given Clarimal Stein also has unusual abilities, you might send her to assist me in protecting your favourite politician."

M scowls. "I appreciate you haven't seen your paramour since summer, but she's much too valuable to our Central European operations to reassign."

"More valuable than preserving Churchill?" I laugh. "Your disapproval —"

"— is irrelevant," M says. "As you're not mortals vulnerable to blackmail, your intimacy plays no role in determining how either of you serves the Empire. And it's a foolish romantic weakness to think, oh, if only I can see Miss Stein, all will remain well between us —"

"Of course I want to see her, but my concern is for the success of the mission. And whether or not we're together, all will remain well between Miss Stein and me."

"You're more foolish than I thought," M says. "A war like this inevitably affects the relations between lovers —"

"Is that how you justify sending my mother on months-long espionage missions?"

"Preserving the Empire justifies everything." M's voice is sharp. "But did my wife sit in the parlour and knit socks for Tommies every day, the war would affect our marriage. Think, Lucy. Miss Stein has proven a loyal and valuable agent for Britain, but her role must be reassessed if you and she part."

"'Part'?" I say. "Spirits above and below! You have nothing to worry about —"

The telephone on the desk rings. M lifts the earpiece. His secretary-bodyguard's voice comes softly across the wire, but a whisper is no protection from my ears. The woman code-named Moneypenny might as well be shouting beside me.

"Send him in." M replaces the earpiece on the switch hook.

When he looks up, I say, "Are you concerned about the supernatural in general, or is there a specific credible threat to Mr Churchill's safety?"

"Your paramour has reported —"

The door opens and we stand as a strong-looking, well-tailored man of about forty enters M's office.

Churchill smiles. "Rumours are all they will prove."

His smile is warm, his eyes alert. He brings us the scent of fresh tobacco smoke. It doesn't obscure the aromas of cut grass and saddle leather from the cigars in his breast pocket.

"Supernatural creatures are rare," he continues. "And a wolfman's as solitary and mindless as a mad dog."

A wolfman occasionally survives the transitional mindless phase, as the redoubtable Moneypenny demonstrates, but wolfmen, unlike werewolves, never form packs.

I am, in fact, M's stepdaughter, as Churchill would know.

He raises his top hat as we exchange slight bows and shows no discomfort at my several inches' advantage of height. "Pleased to meet you, Miss Harker."

I'm wearing the khaki tunic, tie, ankle-length riding skirt, and soft cap of my uniform, and he's famously rude, but he offers no comment on my appearance. He betrays no curiosity at finding a war nurse and ambulance driver in M's office. As the former First Lord of the Admiralty, Churchill would know many women in F.A.N.Y. perform intelligence work.

It's even possible he knows what I am.

When M indicates we should be seated, Churchill takes the adjacent chair, leaning his walking stick against one knee and holding his hat on the other.

M tells him, "We're taking the report of the wolfman squadron seriously."

"Controlling wolfmen would require a form of mind control considerably more powerful than hypnosis," Churchill says. "Even the Martians didn't possess that."

"Dracula did," M says. "But he was destroyed years ago."

From the stiff way in which neither man glances at me, I understand Churchill knows the identity of my true father.

Inconveniently for Britain, I didn't inherit his ability to seize another's will by meeting his gaze.

"It's unlikely the Germans have mind control," M continues. "But we didn't think they could devise automated monoplanes, did we?" He looks at me. "It's classified, but Dr Krüger produced hundreds of those bat-shaped aëroplanes before G-8 destroyed the factory last week."

My lover and I crossed Krüger's path on the Titanic, some years ago, but failed to finish the German science hero.

"How on earth could the Germans afford to produce hundreds of automated monoplanes?" I say.

"Not 'on earth,' perhaps," M says. "My younger brother and Professor Challenger think the Germans are getting gold from the centre of the earth."

"Through the rumoured natural entrance in the mountains between Gotha and Eisenach?" I laugh. "I thought the hollow earth was so much tommyrot."

Churchill raises his eyebrows. Perhaps he thinks I speak too freely for a woman. Perhaps my cheek will brace him for the shock of a woman bodyguard.

M says, "Our intelligence indicates a pair of Americans have tunneled to the centre of the earth inside an unrecovered 'mechanical mole.'"

"Dear God," I say. "If the Germans have access to nearly unlimited wealth, they might win the war."

"They would win the war," Churchill says. "Let us hope the earth's as solid as Asquith's head." He returns his attention to M. "I carry silver bullets, of course, and army chaplains have wolfsbane, stakes, and holy water. If your department can keep my presence at the Western Front a secret, Mr Holmes, I'll be at no more risk of death than any other fighting man."

M says, "The more serious risk would be German mind control, given you're intimate with British discoveries from our 'reverse engineering' of the Martian technology. Miss Harker will act as your secretary on the front, but her true responsibility will be to serve as your bodyguard."

"Preposterous," Churchill says. "I write my own letters."

I regard him. "You oppose the women's vote, but don't mind a woman's protection?"

I smile at him, letting my fangs extend, but he shows no more reaction than if I were a statue.

M gives me a warning glance and turns back to Churchill. "How should we explain Miss Harker's presence at your side?"

I'm tempted to offer to masquerade as Churchill's mistress. His parents' infidelities were the subject of much gossip. Still, there's never been a suggestion that he's unfaithful to his wife, and I like what I know of her. I keep silent.

"I'll request a motor-car," Churchill tells M. "It's a waste of a good fighting man to put him behind the wheel. Miss Harker has been driving ambulances through mud and craters and artillery fire. She'll raise little comment as my chauffeuse."