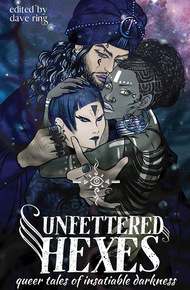 dave ring is a queer editor and writer of speculative fiction living in Washington, DC. He is the publisher and managing editor of Neon Hemlock Press, as well as the co-editor of Baffling Magazine. His short fiction has been featured in numerous publications, including Fireside Fiction, Podcastle, and A Punk Rock Future. Find him at www.dave-ring.com or @slickhop on Twitter.

Unfettered Hexes: Queer Tales of Insatiable Darkness is a speculative anthology ofqueer witches, the knife edge between the sacred and the profane, and infinite darkness. Find your coven, craft new rituals and hex your enemies in twenty four stories, two poems, two comics, two story games and a bevy of illustrations.

A stunning collection that includes poetry, comics, and games as well as conventional fiction, all of them delving into the witchy paradox of power and stigma. Dark, compelling, powerful fiction. – Catherine Lundoff and Melissa Scott

A Note From the Editor

There are innumerable reasons that readers and writers, queer and otherwise, might be drawn to witches and witchery. Among them, perhaps, are power and stigma, craft and community. I have always found it intoxicating how witches so often seize their otherness as a strength. I courted that feeling with this anthology. And yet, throughout the process of curating these tales, it quickly became apparent that I should stay wary of my own expectations, whether it be of those writers invited to take part, or of those whose stories were tendered for my consideration. More often than not, I discovered how seemingly familiar incantations might veer into strange cadences or take on unexpected syllables, and either way, I found myself chanting along. That was the most profound gift I found within these pages as an editor: being led by the hand to traverse unforeseen realities.