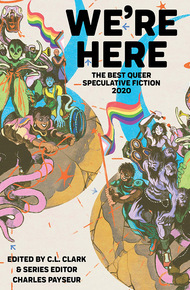 On the 2021 Locus Recommended Reading List. Nominated for an Ignyte Award in Best Anthology/Collection.

"If You Take My Meaning" by Charlie Jane Anders
"A Voyage to Queensthroat" by Anya Johanna DeNiro
"Rat and Finch are Friends" by Innocent Chizaram Ilo
"Salt and Iron" by Gem Isherwood
"The Currant Dumas" by L.D. Lewis
"Everquest" by Naomi Kanakia
"Portrait of Three Women with an Owl" by Gwen C. Katz
"The Ashes of Vivian Firestrike" by Kristen Koopman
"To Balance the Weight of Khalem" by RB Lemberg
"Thin Red Jellies" by Lina Rather
"Body, Remember" by Nicasio Andres Reed
"Escaping Dr. Markoff" by Gabriela Santiago
"The Last Good Time to Be Alive" by Waverly SM
"Monsters Never Leave You" by Carlie St. George
"The Wedding After The Bomb" by Brendan Williams-Childs
"8-Bit Free Will" by John Wiswell

A splendid "best of" collection — the range of voice and theme is impressive, and the editors have made great efforts to gather stories from more than the usual suspects. Highly rewarding! – Catherine Lundoff and Melissa Scott

A Note from the Series Editor

I never imagined I'd be co-editing a Best Of anthology, in part because declaring some group of works the "best" based on editorial preference is...well, not something I'm wholly comfortable with. But since the discontinuation of the Lethe Best Ofs (Wilde Stories, Heiresses of Russ, and Transcendent) that focused on stories with queer content, I've been missing the voice they brought to the wider Best Of conversation. And tracking, celebrating, and promoting queer speculative fiction has been something I've been engaged with for some time, either passively as a fan of it or actively through my monthly reading lists. So I'm not shy about being involved in the work, and this is perhaps just a continuation of my passions and my pursuits as a reviewer and critic. So here I am, writing this introduction, trying to find things to say about the best queer speculative fiction of the last year.

But that's not really the start, either. First, I think I have to ask myself, "What is queer speculative fiction?" I feel the need to define terms a bit at least in this first volume because nothing about queerness is simple (except that it's awesome). When I say queer speculative fiction, I mean work that features queer characters and/or themes. The writers of these works aren't required to be queer, or to be out as queer. The conversations around that aspect of writing, publishing, and criticism are difficult and nuanced, but for this collection, the criteria is on the queerness of the content. Though...who gets to judge? Certainly if it were just one or two people going around deciding what stories were "queer enough" to consider for this anthology, there'd be a bit of a problem. Thankfully, the best judge of whether a story should or should not be considered is the author of the work, and in that spirit works could be submitted for consideration. It's not a perfect solution, and I did my best to canvas publications and my own reading for further works to consider as well, but it is, I feel, the best solution available, and I can't complain about the response we received.

After all, I often find myself a bit frustrated seeing Best Of anthologies where the same few publications seem to feature prominently punctuated by exceptions. Where there's a general sense that the field isn't as wide as it is. For queer speculative fiction, this is complicated by what publications put out more or less queer stories, which is by no means equal. It's also shaped by my own preferences and biases, and those of my co-editor, like any Best Of. All told, I tried my best to look widely, and even so I feel there's room for improvement, as when compiling the short list I noticed I had multiple stories from Strange Horizons, PodCastle, and The Dark. Which wasn't bad at all, but I don't want to fall into a kind of complacency with my reading that might lead me to not consider as closely or enthusiastically works coming from all over. To that end, I've already added a lot of publications to what I'm reading in 2021, to go along with what I had already been reading in 2020. Plus, again, the open submissions will hopefully fill in some areas that I cannot, as a single reader, cover.

For this anthology, though, I've certainly found that queer SFF is alive and well, and we received close to 300 submissions, which brought the number of stories considered for this anthology probably over 500. And that's...well, amazing. That's something to celebrate, even as it's also something to contextualize before voices from certain quarters begin to claim that publishing queer speculative fiction is easy or advantaged in all levels of the field. After all, a number of the works came from publications that specifically put out queer speculative fiction. Short fiction venues like Glittership, Prismatica, and Baffling Magazine, as well as anthology projects like Silk & Steel, Glitter + Ashes, Decoded Pride, and more, all helped to really boost the numbers of queer speculative fiction being put out. And these represent some incredibly exciting, incredibly good projects that feature some of the most prominent and powerful writers out there. Most of these, though, are projects funded and fueled by small teams and the intense efforts of queer editors and creatives, all happening without an abundance of institutional support.

Not that there's not reasons to celebrate the queer speculative fiction coming out from larger, more established and more funded publications. Uncanny Magazine, Strange Horizons, the Escape Artist podcasts, and many more short fiction venues have put out a lot of queer stories. As do anthologies from even larger publishers. Queer SFF novellas in particular have had a phenomenal year at presses large and small, with major releases from Tor (like Finna by Nino Cipri), Tachyon (The Four Profound Weaves by R.B. Lemberg), Aqueduct (City of a Thousand Feelings by Anya Johanna DeNiro & more), Neon Hemlock (all four of their novella releases, including the phenomenal Stone & Steel by Eboni Dunbar), Clarkesworld ("Power to Yield" by Bogi Takács), Unnerving Books (Offstage Offerings by Priya Sridhar), and many more. But while queer stories are being published at the largest and most well-known venues, any idea that they are omnipresent or represent anything close to a majority of works published should be quickly dismissed. Rather, these stories and the landscape that allows for their publication exist despite a constant grumbling and prejudice, into whose face we must constantly stand and say "get used to it!"

Case in point, the work of my co-editor, C.L. Clark, was phenomenal in 2020, and especially the Ignyte Award finalist "You Perfect, Broken Thing" (Uncanny Magazine). It's one of my favorite stories from last year, but because they are involved with editing this, it wasn't able to be included. And just because you should read all their stuff, "Forgive Me, My Love, for the Ice and the Sea" from Beneath Ceaseless Skies (which landed on the Locus Recommended Reading List) and "After the Birds and the Bees Have Gone On" from Glitter + Ashes are both also wonderful and feature messy and real and glorious queer relationships.

Though their fiction cannot be included in this year's We're Here, I'm honored to be joined by such a sharp and celebrated author and editor. Through their work at PodCastle, Cherae has been recognized with Aurora, Ignyte, and Hugo Award nominations, and last year won, along with the PodCastle team, the British Fantasy Award for Best Audio. As if all that weren't enough, their recent debut novel, The Unbroken, is a powerful and stunning epic that is also really heckin' queer.

So it's a great time to be a reader of queer speculative fiction, even if those lingering conversations about portrayal, audience, and identity aren't really going anywhere. With the increased marketability of queer SFF, with its increasing prominence in the field, the prospect of curating a Best Of is getting more complicated, more difficult rather than easier. So where does that leave me and this project that you're holding in your hands (or reading on a screen)? Well...

How I like to think about Best Ofs is that they represent a voice in a conversation. Or voices, as this isn't a solo venture. Of the editors, speaking from a place of power, yes, with the backing of a publisher. But still just one (or two) perspectives weighing in with joy and with excitement to engage with and celebrate queer speculative fiction. To do the awkward work of breaking the ice, so that what follows can be a conversation between multitudes of people all talking about, all engaging with queer speculative fiction. I'd love to see more people put out lists of their favorite queer speculative fiction. To spread their joy and their love of stories that moved them, that entertained them, that maybe made them feel less alone in a world that for the last year has certainly been isolated and difficult.

And I'll close with an entreaty. For writers, that if you get a queer SFF story out in the world, let me know. For readers, that if you come across a queer SFF story that you loved, let me know. Either through the open submissions for this project, or through Twitter (@ClowderofTwo) or email ([email protected]). I compile these stories into a list every month publicly on my Patreon, and I really just love finding new works of queer speculative fiction.