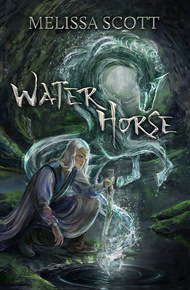 Melissa Scott is from Little Rock, Arkansas, and studied history at Harvard College and Brandeis University, where she earned her PhD in the Comparative History program. She is the author of more than thirty original science fiction and fantasy novels as well as authorized tie-ins for Star Trek: DS9, Star Trek: Voyager, Stargate SG-1, Stargate Atlantis, Star Wars Rebels, and the anime series gen:LOCK. She won Lambda Literary Awards for Trouble and Her Friends, Shadow Man, Point of Dreams (written with her late partner, Lisa A. Barnett), and Death By Silver, with Amy Griswold. She also won Spectrum Awards for Shadow Man, Fairs' Point, Death By Silver, and for the short story "The Rocky Side of the Sky" (Periphery, Lethe Press) as well as the John W. Campbell Award for Best New Writer. Her most recent solo novel, Finders, was published in late 2018 and she is currently at work on the next book in the sequence.

For the last twenty years, Esclin Aubrinos, arros of the Hundred Hills, has acted jointly with Alcis Mirielos, the kyra of the Westwood, and the rivermaster of Riverholme to defend their land of Allanoth against the Riders who invade from Manan across the Narrow Sea. He has long been a master of the shifting politics of his own people and his independently-minded allies, but this year the omens turn against him. The Riders have elected a new lord paramount, hallowed servant of the Blazing One, a man chosen and fated for victory.

The omens agree that Nen Elin, Esclin's stronghold and the heart of Allanoth, will fall when a priest of the Blazing One enters its gates. Esclin needs a spirit-bonded royal sword, a talismanic weapon made of star-fallen iron, to unite the hillfolk behind him. But the same vision that called for the sword proclaimed that Esclin will then betray it, and every step he takes to twist free of the prophecies brings him closer to that doom.

I'm already hoping for a sequel! The world building is gorgeous, the plot is compelling and the characters are unforgettable – if you're looking for more terrific epic fantasy with queer characters, this should be on your list. – Catherine Lundoff and Melissa Scott

Esclin took it and drew the well-honed blade across the heel of his left hand. The skin opened to its touch, blood and pain blossoming together, and he closed his fingers tight over both. He handed the knife back, and Talan took it wordlessly, her hands for an instant almost clumsy. The tower rose in memory, the burning, falling roof and the weeks of fever after; he acknowledged them, and put them away. He was Arra's kin, the lord of Arra's Folk; the flames would not touch him.

The blood was pooling in his hand, hot and sticky. He took a breath, and reached for the water that lay beneath the nenn. The Hidden River was strong and cold even at this slack time of year, the Aurinand just as present, winding out from under the hill to spring to life beside the great gates, a dozen lesser, nameless channels. Water horses were born and bred in such streams, lay sleeping beneath the ice, curled among the stones and swelling springs; he drew that power to him, river upon stream.

He reached finally into the heart of the nenn, into Rota's sanctum, the White Mistress's well, where a thread of water fell into a bottomless pool, and drew that darkest of waters to him as well. He wound himself in water, drawing its strength around him like a cloak, like cold shadow. The sunlight faded and the flames recoiled, bending away so that the coals cooled and blackened at his feet. The raised platform of the forge shimmered beyond them, and a sudden twist of wind drove smoke in his face, tasting of the hot metal.

The sun was suddenly in his eye, a shard of white-hot light driving into his skull. The flames leapt higher, long tongues snapping at him like whips. He reached for the Aurinand again, for the Hidden River and the White Mistress's well, but the sun beat down on him, drying those streams. He could feel himself weakening, trapped by the power of sun and fire.