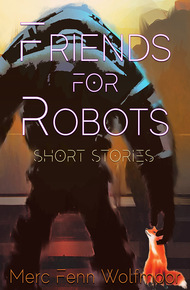 Merc Fenn Wolfmoor is a queer non-binary writer from Minnesota, where they live with their two cats. Merc is the author of the short story collections So You Want to Be A Robot (2017) and Friends For Robots (2021), and the novella The Wolf Among the Wild Hunt (2022). Merc was a finalist for the Nebula Awards for their story "This Is Not A Wardrobe Door" (Fireside, 2016), and they have had short stories published in such fine venues as Lightspeed, Fireside, Nightmare, Apex, Beneath Ceaseless Skies, Escape Pod, Uncanny, and more. Visit their website: mercfennwolfmoor.com or follow them on Twitter @Merc_Wolfmoor.

Have you heard the one about...
...a neural network who wantshumans to drink more water?
...a person stranded on Marswith only an obsolete robotic toy?
...a cyborg caught in a time loopwith a frightened ship?
...a self-aware mech who doesn't wantto be a weapon anymore?
...an AI sent into the deepest partof the ocean—and finds a god?

You'll also meet entrepreneurial barbarians, an astronaut making first contact, a boy who might have (accidentally) started Armageddon, magical birds, a bot who wants to tell jokes, and more. Whether you're a robot or not, come make some new friends. :)

A marvelous collection that showcases the range of Wolfmoor's talent, filled with both humor and heart. – Catherine Lundoff and Melissa Scott

Blockunvir the Bloody crashed through the shop's double doors, his fiery hair streaming like a comet tail behind him, his bronzed skin glistening with sweat. He stomped the dust of travel from his sandals and bellowed, "I seek wine, wenches, and adventure! For by Grimfang's teeth, my blood doth boil within my veins1!"

It was nine a.m. Igvore pointed at the sign above the counter, glancing politely up from their logbook. The sign read:

Blockunvir hesitated, cleared his throat, and tried again. His gravelly baritone reverberated in the empty shop, since it had just opened. "I seek wine, sexual partners, and adventure!"

Igvore bookmarked their page with a dragon scale and smiled at the new customer, hiding their exasperation. Politeness flustered some barbarians, but it was the principle of good service. Did no one actually pay attention to signage?

"Welcome to The Loincloth and the Broadsword: Barbarian Outfitters. We don't serve wine here."

The great barbarian's brow furrowed. He glanced about. The walls were lined with racks of broadswords, scimitars, claymores, and double-bladed staffs; the pelts of sabertooth cats and direwolves draped benches, and hide-bound shields, spiked helmets, chainmail belts, and other assorted equipment was displayed on wooden stands throughout.

Igvore recognized Blockunvir, of course. He had been named Barbarian of the Year half a dozen times in the last decade, and often his rugged visage graced the celebratory posters handed out by the Barbarian Guild. This was the first time Blockunvir had blazed through Igvore's hometown.

"As for the local brothels," Igvore continued, "you will want to check The Lustful Orbs, down the street at the corner of Argon Lane."

"Oh." Blockunvir sighed mightily. He turned, too slow to make a dramatic exit, which hinted that he wanted something. He hesitated by the table of drake horn goblets, this week's featured item. A traveling raiding party had exceeded their carrying capacity and sold Igvore the extra drake parts. "I suppose I shall be off…"

Igvore sensed opportunity, and they put on their best how-can-I-help-you-spend-gold face.

"You clearly seek adventure, for which I have plenty of weapons, armor and treasure maps." Igvore leaned forward. "But I sense you crave more than a simple dungeon or a run-of-the-mill monster fight. Tell me, friend, what do you really seek today?"

Blockunvir rubbed his blocky jaw, scarred handsomely by old battles. "'Tis true, my blood has craved more than adventures the gods have bestowed upon me."

Igvore nodded. "Although I don't advertise extensively, I do provide consulting—"

Just then, Thronk, Igvore's assistant, bustled through the deer-hide curtains that separated the storefront from the storage rooms at the back of the shop. Thronk was head and shoulders taller than even Blockunvir, made of pure muscle and sinew, with a shaved head, chiseled jaw, and cheekbones that would make any sculptor swoon with envy. He wore a leather kilt, an artistically shredded silk vest, and spiked vambraces on each of his massive forearms. Tattoos swirled along his flesh, from the crown of his head to his rippling calves and callused feet.

Thronk smiled cheerfully and nodded at Blockunvir. Then he turned to Igvore and signed, We need to order more sabercat fangs for the Festival of Teeth. Our stock is below fifty.

Thronk winked at Blockunvir, then turned on his heel and disappeared back through the curtain.

"Was that… the Silent Giant of Yldanu?" Blockunvir whispered in amazement.

The warrior had taken a vow of silence after the destruction of his swampland home when he was a lad. Although his foes had been vanquished and his home avenged, Thronk didn't like verbal speech, and stuck with sign language. It suited Igvore fine.

"You would not believe the accuracy of that man's books. Works of art, his inventory lists are!" Igvore sighed, once more chuffed at how lucky they were to have met and hired Thronk. He was good people. "Anyway, we were discussing your—"

The door swooshed open and Igvore turned to see the newest arrivals in their shop.

A group of adventurers blustered in: two kobolds in chain mail, a burly orc with a battle mace, a vaguely humanoid forest druid with a whippoorwill on their shoulder, and a grizzled, world-weary ranger in weather-beaten leathers.

"Is this the gay bar?" the orc asked, looking appreciatively at Blockunvir. The barbarian raised an eyebrow back at the orc, returning the appraisal.

"We heard good reviews about this town's gay bar from the orb-weaver networks," the druid added. Their bird looked balefully around the shop.

"I need a drink," the ranger said. She looked like she needed a nap even more.

[from "The Loincloth and the Broadsword" in Friends For Robots: Short Stories]