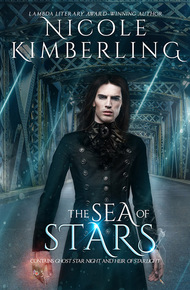 Nicole Kimberling is a novelist and the senior editor at Blind Eye Books. Her first novel, Turnskin, won the Lambda Literary Award. Other works include the Bellingham Mystery Series, set in the Washington town where she resides with her wife of thirty years and an ongoing cooking column for Lady Churchill's Rosebud Wristlet. She is also the creator and writer of "Lauren Proves Magic is Real!" a serial fiction podcast, which explores the day-to-day case files of Special Agent Keith Curry, supernatural food inspector.

The Sea of Stars by Nicole Kimberling

Thomas Myrdin knows that intrigue is part of life at court, but that doesn't make his king's betrayal any easier to take. Yet heartbreak troubles him less than the apocalyptic visions that haunt him. Fiery premonitions that show the world burning in ruins—and the cause, the king's daughter. Visions and vengeance awaken a strange new power within him, but not even he is sure if those visions are prophecy or madness.

Lord Adam Wexley harbors a secret longing for the elegant Thomas, but his duty is to protect the newborn princess. When a sudden threat arises, Adam seeks to procure the services of Grand Magician Zachary Drake. Even if it means sacrificing his own soul—and his body.

Drake has seen the worst of kings and courtiers. Now he protects himself with powerful sorcery and the adamant refusal to affiliate with any of the Four Courts. But the grand magician isn't without weaknesses and Adam may be the one enticement that could draw him to ruin.

One of the most compelling worlds I've read in ages, coupled with fabulous characters and a plot that will keep you enthralled. – Catherine Lundoff and Melissa Scott

Adam loved the music. And the red and amber lights flashing up from the luminous floor. And the crush of dancing bodies. And the strong, sophisticated cocktails. In short, he loved this club.

Pulsing electronic beats throbbed through the smoky air so loud and so low that he felt it deep in his chest. The scenery wasn't bad either. Although the club was mixed, both gay and straight, noble and common, the dark-haired man eyeing him from the neon-lit bar had to be a courtier. Not from Adam's own West Court, but maybe from the North Court. He had that academic look that men from the North Court had. Adam smiled, his signature move. Normally, smiling could not be called a signature move, but Adam fully understood the power of his full lips and straight, white teeth. Smiling elevated him from good-looking blond to sexy hunk.

The lord from North Court, sitting at the bar, sat up straight and motioned Adam closer.

From deep within his pocket, Adam's phone vibrated. He decided to ignore it, then it pulsed again, in that special rhythm. Lady Langdon, his godmother, needed him. With regret he shook his head at Lord North Court and bounded up the staircase that led to street level. He rushed up to the big gorilla doorman who controlled the line of well-dressed hopefuls waiting to get inside. The gorilla bared his teeth and his black fur bristled as Adam jostled past him and out into the humid summer night.

"How may I serve you, my lady?" he answered, slightly out of breath.

"You need to get Drake now!" Lady Langdon shouted so loudly that Adam had to pull the phone from his ear.

"Drake?" Adam squinted down the dark street, feeling too dazed with nightlife to immediately understand what she wanted from him at this hour. "The magician of the Black Tower?"

"Is there another?" Lady Langdon snapped. "Go and bring him! Promise him whatever is necessary, with the exception of your soul. You'll need that later."

"I would think that mere cash would be enough to encourage him." As far as Adam knew, Drake was among the last of the freelancers. A gun for hire in a city where almost every other magician was allied to one of the four courts.

"That's why thinking is not one of the attributes for which you are best known," Lady Langdon said. "Don't fail me."

Adam rounded the corner and found his car and driver waiting. His driver, an elderly orangutan called Karl, had been lightly dozing in the front seat, and started awake when Adam rapped on the hood. He straightened his hat and scrambled out to open the door for Adam, who tumbled into the car's backseat with the lax grace of the practically unconscious. He waited for his driver to resettle himself behind the wheel and said, "To the Black Tower."

Karl nodded and signed, "Did you have a good night, boss?"

Karl pulled onto the downtown street and started for Tower Heights. Adam stared out the window at the sidewalk, still vibrant with life, even though sunrise was quickly approaching.

Their route took them right alongside the heavily mosaicked walls of royal palace.

At this time of morning the figure of King Simon Columbain slaying the great serpent-demon seemed like it might almost spring to life. Soon the first morning rays would fall across the gilded tiles that comprised King Simon's sorcerous sword, Demonslayer. Adam admired the strength and courage of his forbearers in their historic deeds, but tried not to think about them too long. Ruminations of that sort would only lead him to fret over his own lack of heroic achievement. Better to admire King Simon and leave it at that.

As an attendant to his godmother, Lady Langdon, Adam's importance barely surpassed that of furniture. He looked good dressed in the West Court colors, yellow and gold. He had a nice voice. He could hold Lady Langdon's fur coat, handbag and hat simultaneously. He could play guitar and piano, but wouldn't unless asked. Other attendants had skills. Bankers. Accountants. Armies of lawyers to oversee the formal transfer of souls. Lady Langdon called upon them constantly. Him, she never needed for anything but to fetch and carry. This time, Grand Magician Drake of the Black Tower. Next time, maybe her umbrella.

Three soulless custodians, a thin, gray-haired man and two doughy women, finished polishing their section of wall and plodded across the entryway in a slow, silent procession. A truck driver didn't brake as he entered the palace gates, barely missing the last man. The soulless resumed polishing the wall, carefully scratching grime from the grout, sweeping the sidewalk and picking up cigarette butts from the gutter.

He saw Karl glance over at the soulless in the same searching way that inhabited animals seemed to.

"Looking for your old body out there?" Adam asked.

Karl shook his shaggy head and expelled a snort that Adam thought was much like laughter, then lifted one long-fingered hand and signed, "My body's dead, boss. Why do you think I'm inside of this monkey?"

"You could be a convict," Adam pointed out.

"Not with a palace chauffeur's license." Karl made a left up the hill toward the Tower Heights neighborhood, and then eased to a stop in the loading zone in front of a dark monolith of a building. He turned and pulled a huge orangutan grin and signed, "Here you go, boss, good luck in there."